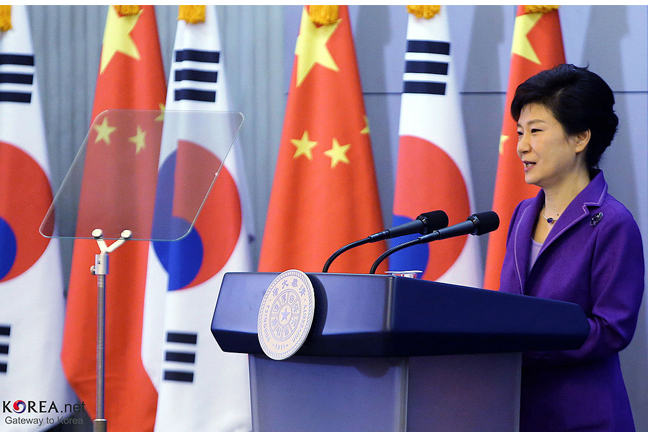 From the high drama of normalization in the early 1990s, China-South Korea relations progressed steadily over the next two decades. President Roh Tae-woo’s successors, Kim Young-sam (1993-1998), Kim Dae-jung (1998-2003) and Roh Moo-hyun (2003-2008), shared the view of good relations with Beijing as a cornerstone of South Korean foreign policy. Kim Dae-jung achieved a breakthrough on the Peninsula by visiting Pyongyang in 2000 for the first-ever inter-Korean summit, which had the added benefit of bringing Seoul, Pyongyang and Beijing into basic strategic alignment.

When US President George W. Bush reversed Clinton’s policies of engagement with Pyongyang and support of inter-Korean rapprochement, China and the two Koreas had to move forward in the face of American resistance. South Korea’s progressive president Roh Moo-hyun even hinted that Seoul was tilting away from Washington and toward Beijing, stoking anxiety in American foreign policy circles with his talk of the ROK as a “bridge” between the two countries.

To be sure, China and South Korea hit bumps along the way. Trade disputes like the redolently named “garlic wars” of 2000 would flare from time to time. A “history war” broke out in 2002 over Chinese claims that the ancient Koguryo kingdom might be Chinese rather than Korean in origin. And yet, South Koreans continued to make up the largest contingent of overseas students in China, more and more Chinese fell in love with South Korean television dramas and pop music, and senior political leaders put a priority on good relations overall despite areas of contention.

This positive trajectory was deflected off course during the presidency of conservative businessman Lee Myung-bak (2008-2013). Lee reversed his liberal predecessors’ “sunshine policy” of engaging Pyongyang, thus breaking the alignment with Beijing. Lee also prioritized close relations with the US and eagerly pursued an unlikely “bromance” with Barack Obama, as ties to Beijing slackened. When inter-Korean conflict erupted in 2010 with the sinking of the South Korean ship Cheonan and North Korea’s artillery attack on Yeonpyeong Island in the Yellow Sea, China refused to side with the South. The 20th anniversary of PRC-ROK normalization in 2012 came and went with barely a single toast made. By the time Lee’s term ended in January 2013, the relationship was at its lowest ebb in the post-Cold War era.

Although Lee’s successor Park Geun-hye was a purebred conservative, she distanced herself from Lee’s hardline policy toward North Korea during the presidential campaign, and also sent clear signals to the South Korean public that she would improve relations with Beijing.

Indeed, after Park’s inauguration, China was the second country she visited after the United States. Her summit with new Chinese leader Xi Jinping in June 2013 made it obvious that both leaders were committed to strong ties and even seemed to enjoy one another’s company. Park jumped out ahead of the pack by forging perhaps the closest relationship with Xi of any leader in Asia.

A smooth summit with Xi would have been enough to count the visit a success. But Madame Park also seemed to reach the Chinese public at large, in a way that official visits rarely do. She delighted her audience at prestigious Tsinghua University in Beijing by speaking in self-taught Mandarin, and telling students of the solace she took in reading modern Chinese philosopher Feng Youlan during the dark years after her mother was shot dead in a failed 1974 assassination attempt on her father, Park Chung-hee, who took power in a coup d’etat in 1961 and stayed in power until 1979.

As the first female head of state in a country that once belonged to Confucian civilization, Park’s visit took on added resonance for Chinese women. The Chinese translation of her autobiography, Despair Strengthened Me, became a bestseller, and people started talking about a “Piao Jinhui fever”.

Friendship between China and South Korea was once again in bloom.