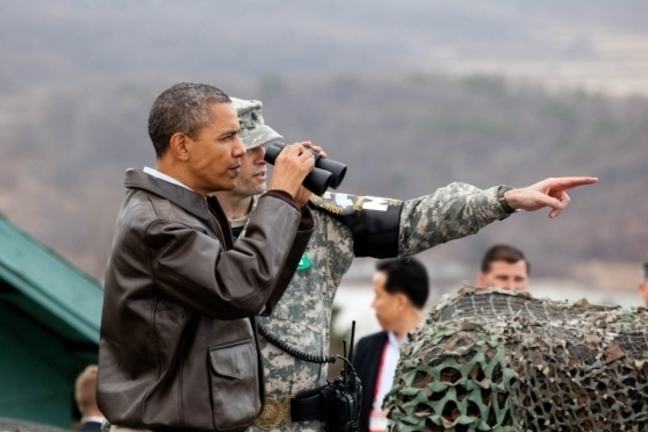 President Barack Obama is briefed by Lt. Col. Ed Taylor as he views the DMZ from Observation Post Ouellette at Camp Bonifas, Republic of Korea, March 25, 2012.

Historically, China and North Korea have been two of the hardest epistemological targets for Western scholars and analysts to hit. A good deal of the misunderstanding was self-inflicted ideological distortion—anti-Communist blinders made it hard to see the countries for what they were. But China under Mao—and to a lesser extent still today—and Korea under the Kims shroud much of their politics in secrecy, and guard many historical documents under lock and key. China of course has opened up to an extraordinary degree over the past few decades, although challenges remain. North Korea is still largely closed off to foreigners, and remains very hard to get reliable information about.

The result of our limited access to sources, both people and documents, is that experts on the PRC and even more the DPRK do a lot of “watching.” Indeed, there is a professional term for “China watchers” and “North Korea watchers”—people who spend their time scrutinizing every drop of information (and misinformation, and disinformation) about Beijing and Pyongyang in search of clues to the real story. There are books (like Richard Baum’s China Watcher: Confessions of a Peking Tom ), organizations (like the Young China Watchers, with groups in seven cities worldwide), and even CIA articles on “The Art of China Watching”. Two of the best and most influential websites on political and economic developments in North Korea, meanwhile, are North Korea Leadership Watch and North Korea Economy Watch.

When performed with the right combination of wisdom and humility, China watching and Korea watching truly are an artform, one that requires skills honed by training and experience, endless daily practice, and good information in the service of great intuition.

Watching can also be intellectually perilous, however, when you don’t know what you are looking at and no idea what you are looking for. The insatiable demand for “news” about North Korea in particular exercises a tyranny of low expectations on journalists and “watchers”, who conspire to feed the beast (I once joked to a journalist friend how North Korea was like cat-nip to the media, to which she quipped, “more like cocaine”). Precisely because it’s so difficult to confirm stories, interview sources, and investigate on location, North Korea becomes a kind of anything goes wonderland of “reports” that border on the absurd.

Reporting and analysis on China used to be almost as bad, but has improved exponentially over the past decades. Big gaps remain, but the standards are much higher.

So keep the limits of knowability in mind as you read the next “news report” about Pyongyang, or Korea-China relations for that matter. We have no choice but to keep watching. But always ask yourself, who is watching the watchmen?