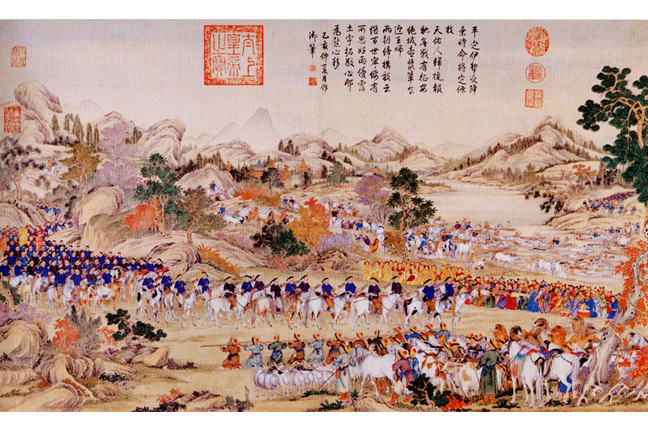 "Receiving the surrender of the Ili". Marching during the spring, the Chinese army reaches Kouldja on the Ili river without opposition, 1755

The rise of the Great Qing Empire over the course of the 17th and 18th centuries utterly reshaped the territorial, cultural, and geopolitical map of Asia. “China” more than doubled its size from Ming to Qing, as the conquerors added vast stretches not only of their native Manchurian steppe, but also Mongolian, Uighur, and Tibetan borderlands into Beijing’s orbit.

There was nothing particular peaceful about China’s rise in the early and “high Qing” eras as far as subjugated peoples were concerned. Immediately after seizing Beijing, Manchu troops terrorized Chinese towns and cities that put up resistance as they pushed south—the most horrific example was the wealthy city of Yangzhou, whose massacred population served as a warning to others. After a brief period of resistance, Han Chinese gave up hope in Ming restoration and started joining the Qing in droves, creating a Manchu-Han amalgam ruling elite. Vastly outnumbered by Han Chinese, Manchus preserved for themselves the highest offices in the state, including of course the monarchy itself. In many cases one Manchu and one Han would jointly hold the same senior position. The system is known as dyarchy.

But the Qing was more complex than a dyarchy—it was a polyarchy. Although the most populous by far, Han Chinese were but one among the various “constituencies”, as Dartmouth historian Pamela Crossley calls them, that together formed Qing rule. Many Mongolian tribes and territories were integrated into the Qing early on, going back to the days of Nurhaci. Mongolian groups who resisted were put to the sword. The most brutal example were the Dzungar tribes in western Mongolia, who held out against Qing power until a massive military campaign in the 1750s finally eliminated the Dzungars completely. The Qing map of China spread its tentacles even further into the northwestern frontier, incorporating what would become today’s province of Xinjiang (新疆, “new territorities”).

With the Dzungars destroyed, Beijing further strengthened its own hand in Lhasa, center of Tibetan theocracy led by the Dalai Lama. Near the end of the 18th century, Beijing once again dispatched troops to Lhasa to repel an invasion from Nepal, and installed resident governors to watch over Tibetan aristocrats and monks. The same Chinese emperor Qianlong (乾隆) who waged the Dzungar campaign and ordered the Lhasa expedition also sent troops into Burma and Vietnam in the 1780s—reminders that the sword of Qing sovereignty could strike across Asia.

To hold together their polyglot, multiethnic empire, Qing emperors could not rely on the Ming tributary system alone. So they created a parallel structure of institutions and rituals for non-Confucian “constituencies” such as Mongolians, Uighurs (who practiced Islam), and Tibetans. Rather than leave these groups languishing at the bottom of the tributary hierarchy, the Qing incorporated their languages, religions, and customs into the fabric of the empire and legitimacy of the Emperor himself. Violent in the making, the Qing rose from a Jurchen tribal leader on the Korean border to eventually impose a Pax Manjurica across much of the Asian continent.

What exactly does all of this have to do with Korea and the China-Korea relationship? That precisely what I hope you can help me think about in the discussion that follows this step.