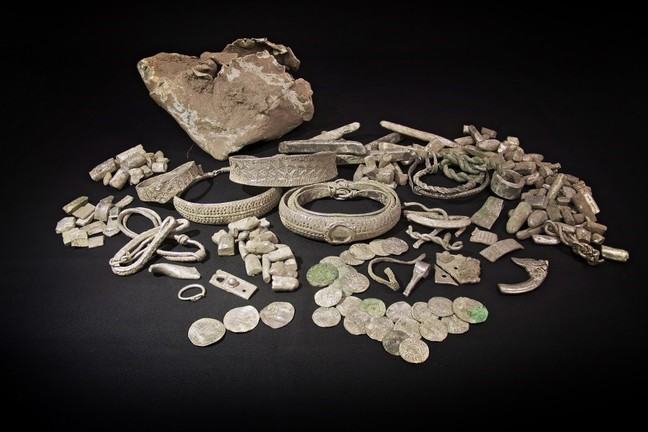 The early medieval period is often called the ‘Dark Ages’ and indeed we possess few texts that shed light on this era in north-west England. Even so, Castle Hill would have seen dramatic changes as the Roman Empire collapsed and new kingdoms arose.

As we heard in the video in step 1.3, the fate of Lancaster’s fort in the post-Roman period is unclear. The area eventually became incorporated into the Northumbrian kingdom, which fragmented in the Viking Age. Castle Hill’s prominent site – overlooking the River Lune and Morecambe Bay – would have offered a clear view of the movements of bands that we know as ‘Vikings’.

In this section you will learn more about a Viking silver hoard found on Morecambe Bay, not far from Lancaster.

First, read the text of an article that I originally wrote for a blog in 2014. It is reproduced here with modifications. Then reflect on the questions. You could share your thoughts by posting a comment.

‘The Silverdale Hoard was discovered by a metal-detectorist in 2011. The appropriately named Silverdale is located on the edge of Morecambe Bay, on the coastline of the Irish Sea. The hoard was found in a lead container and comprises over 200 pieces. The best-publicised element is a coin featuring the name ‘Airdeconut’, which may refer to a hitherto unattested Scandinavian ruler in Northumbria. This is one of 27 coins including Alfredian, Frankish and Arabic types. There are also 14 ingots, 10 complete arm-rings (including types linked to Ireland), 6 bossed brooch fragments and hacksilver. The current estimate for the date of the hoard’s deposition is c. 900–10, according to Gareth Williams of the British Museum.

The hoard awaits full publication, and so discussion of its significance is at a preliminary stage. However, it raises interesting questions for the study of north-west England in the Viking Age. What is the relationship to other hoards found in the area (for example, the Cuerdale Hoard, which was deposited near Preston in the first decade of the tenth century?)

This is the end of the article. Now consider the questions (please note that we cannot answer these questions definitively; historians and archaeologists must develop the most persuasive answer based on the available evidence).

You can read more about those hoards here: