This content is taken from the University of York's online course, Logic: The Language of Truth. Join the course to learn more.
View course
4.2

0:39Skip to 0 minutes and 39 seconds If P is false, we don’t have a break to that idea, so it’s going to be true. This also applies to the 4th row. So it is going to be true there too. So the truth table for P arrow Q is that it’s going to be true in every single case except for where the antecedent is true and the consequent is false. That is, just where it’s wrong to say that, where P, Q.

This video shows how we define the meaning and logical powers of arrow using a truth-table. The remainder of this step introduces further discussion of this connective.

Secondly, unlike ampersand and vel, the order of clauses in an arrow sentence makes a difference to its truth-conditions. 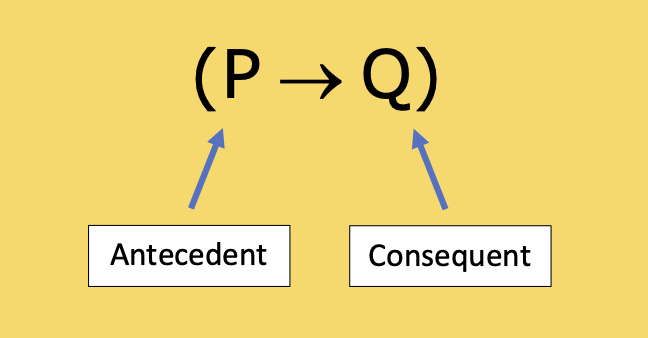 Arrow claims are a kind of conditional claim (‘conditionals’, for short). You can think of this in the following way: where the condition specified in the antecedent applies, things are as the consequent says. Conditionals include ‘If … then … ’-claims in English, like ‘If it’s raining, we’re getting wet’ and claims of other forms, such as ‘You must be over 18 to buy alcohol’ and ‘Using a screen late at night results in poor sleep’.

An arrow sentence is only false when its antecedent is true and its consequent is false. In all other cases, it’s true, as shown in its defining truth-table (Fig. 1).

Finally, and importantly, there seem to be parallels between arrow and at least some uses of ‘If … then … ’ as a sentence-connective in English. But whether arrow and ‘If … then … ’ have the same truth-table—even in the most favourable cases—is a controversial issue, as we’ll see. Despite this controversy, we’ll also see that we can use arrow to help us think in a systematic way about arguments expressed in English using ‘If … then … ’.