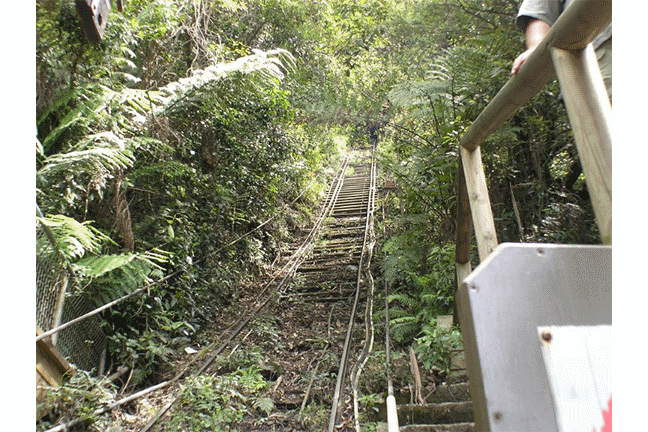 Slopes of lines — as well as pyramids, railways and roofs

The slope of a line is a precise mathematical formulation of how steep it is. This is a concept that has important ramifications when building roads, railways, houses and ski jumps. Even ancient pyramids would have been built with a firm eye on how steep things are!

What is the slope of a line?

We often use the Greek symbol \(\Delta\) to denote a change, in which case we would write

Note that the slope of a vertical line is not defined, since in that case the denominator would be zero, which is not allowed. Another way of expressing this is that a vertical line has slope equal to “infinity”.

Because of similar triangles, if we choose two other points on the same line, the calculation of the slope would give the exact same value. So the slope really does depend on the line, and not on the two particular points we choose on it.

The connection with direct proportions

When we visualize \(\normalsize{y=mx}\) as a line in the Cartesian plane, we see that \(\normalsize{m}\) is exactly the slope of this line as defined above. In the following figure we see lines together with their various slopes.

Slope or pitch of roofs

While steep roofs are more difficult to build, and more dangerous to work on and fix, they have advantages. Thatch roofs for example need to be steep to allow water to drain from them effectively. Roofs in areas where there is a lot of snow need to have a high pitch so that the snow does not accumulate over winter.

Gradients or slopes of railways

Slopes of lines are important for railway engineers. On a \(\normalsize{1\%}\) (1 in 100) gradient, a locomotive can pull half (or less) of the load that it can pull on level track. Modern railways have improved technology, and in fact the steepest part of the Lisbon tram system, located in Calçada de São Francisco, has a record gradient of 14.5% (about 1 in 6.9).

Of course for railways with systems of cables or interlocking cogs, the gradient can be much higher. For example, Pilatus railway (Switzerland) at 48% and the steepest in the world Scenic railway (Australia) at 52%.

Gradients or slopes of streets

The residential street with the steepest gradient is Baldwin street in Dunedin, New Zealand, with a gradient of about \(\normalsize{35\%}\).

Q3 (M): What do you guess is the maximum average gradient of a Tour de France leg?

Q4 (M): How about the slope for the Mayan pyramid at Chichen Itza?

Here is a picture which illustrates these perpendicular lines in the case of \(\normalsize{A=[3,5]}\).

A4. El Castillo, the main pyramid at Chichen Itza is 55.3 metres wide by 30 metres tall, resulting in a slope of just over \(\normalsize 1\).