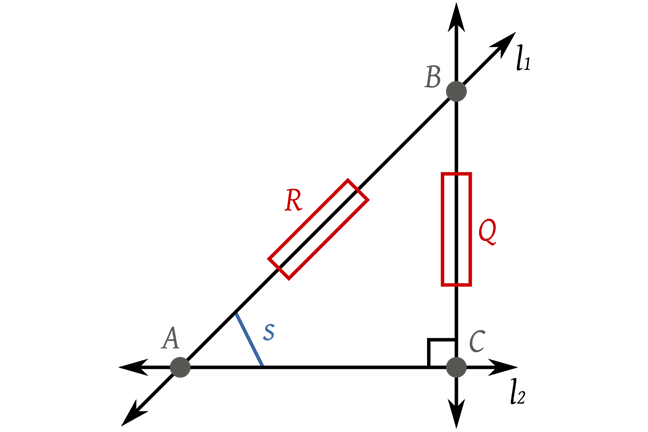 A triangle in Rational Trigonometry

While distance is a practically useful linear quantity, the corresponding quadratic quantity is often mathematically more fundamental. Our understanding of distance squared, or quadrance, goes back to ancient Greek mathematics and Euclid’s formulation of Pythagoras’ theorem, and forms a bridge to an exciting development of modern geometry.

In this step, you will

This is actually how Euclid stated it in Proposition 47 of Book 1 of Euclid’s “The Elements”, presented by David Joyce — in terms of areas of squares, rather than squares of lengths of sides. The reason Euclid preferred this language was that it had the big advantage of avoiding irrationalities.

which we can never completely determine. It follows that even the “existence” of an “irrational number” such as \(\normalsize{\sqrt{34}}\) is computationally problematic.

Note however that the calculations of the areas of the three squares is an elementary matter – this is why the ancient Greeks preferred to measure segments by constructing squares on them, a process they called quadrature. Following the Greeks, we define the quadrance of a segment, denoted usually by \(\normalsize{Q}\), to be the area of a square built on it.

Quadrance is an important quadratic concept. It scales quadratically, so that if we double a segment, its quadrance multiplies by \(\normalsize{4}\). From a theoretical point of view, the precision of working with quadrance outweighs the disadvantage of dealing with a quadratic (rather than a linear) relation.

There is also an associated rational analog of angle called the spread between lines. This approach to trigonometry was introduced by Norman in his 2005 book Divine Proportions: Rational Trigonometry to Universal Geometry. The first chapter is quite readable for high school students, you can have a look at Divine Proportions book.