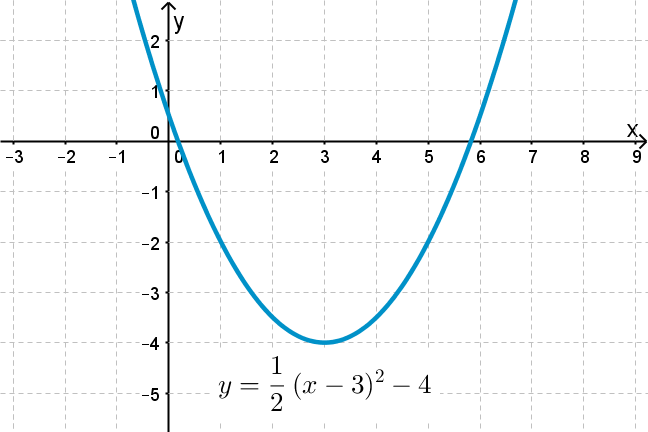 A parabola translated from the origin

In this step we will see how scaling and translation affect the graph of a quadratic function.

Translating a standard parabola up or down

Now we investigate what happens if we translate a standard parabola \(\normalsize{y=ax^2}\) up or down. This is quite easy. Note that however we translate a parabola, its vertex, and focus, and directrix will move in exactly the same way.

Geometrically, if we add a constant \(\normalsize{k}\) to the equation \(\normalsize{y=ax^2}\) then we translate the parabola by \(\normalsize{k}\) in the vertical direction. The algebraic operation that shifts a function vertically by \(k\) can be thought of as replacing \(y\) with \(y-k\).

We could expand the equation to get

This is the general form of a standard parabola which has been translated by the vector, or directed line segment, \(\normalsize{(h,k)}\). This an important expression in the theory of quadratic functions.

Q2 (M): What is the vertex of this parabola?

A key fact about parabolas

This is a pleasant and important fact about parabolas. It shows us that all quadratic functions, even ones with complicated formulas like \(\normalsize{y=7x^2-11x+8}\) have essentially similar shapes, and that we can find out where they are situated by unravelling how much \(\normalsize{x}\) and \(\normalsize{y}\) translations are required to obtain them from standard parabolas.

So there is a fundamental question here: how can we translate a standard parabola to get the general parabola \(\normalsize{y=ax^2+bx+c}\)? Finding the answer will take us to ancient Persia, to a technique called completing the square, and to a remarkable identity that all students of mathematics ought to have seen.