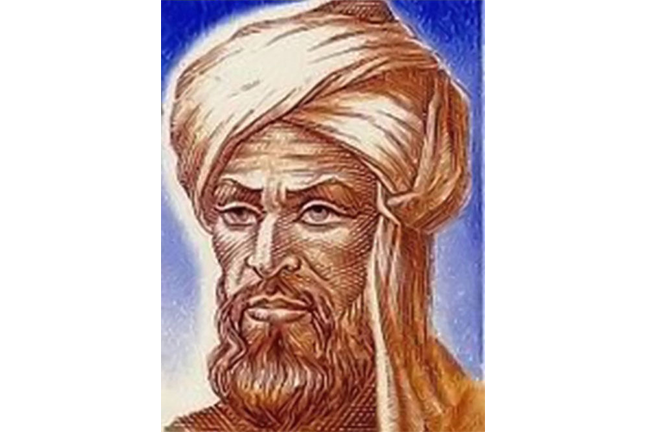 Al Khwarizmi is often considered the father of algebra, due to an influential text he wrote, and his name is the origin of the term algorithm. His `completing-the-square’ technique lies at the heart of a beautiful formula that we call al Khwarizmi’s identity. The usual quadratic formula is a consequence.

In this step you

This step is probably the algebraic highlight of the course, and the most detailed steps. On this page is a very important derivation. Make sure you proceed slowly and carefully, please check all the steps by writing things out line by line, and then apply your understanding to work out the answers to the questions. This is how we learn mathematics.

Suppose we want to solve the quadratic equation

Half of the coefficient of is , so we take the to the other side, and add the square of to both sides. This gives

Now we rewrite the left-hand side as a perfect square:

At this stage we have to “take the square root” of . What does this mean? It means finding a number with the property that . In this case such a number actually exists: it is . But otherwise we would just write to represent an approximate square root, and its negative. We can’t forget about the negative, since we want two solutions!

So in our case or . Thus we do get two solutions, namely or .

Now let’s apply this to transform the general quadratic polynomial

where . First step, factor out the to get

Add and subtract inside the right hand expression:

Now there is a perfect square inside these brackets:

Now for the last step, we multiply through by to get

This is one of the really great derivations in mathematics, resulting in an essential formula, which we call al Khwarizmi’s identity. This step has lots of questions to give you practice with this formula!

Once we have written a quadratic function in the form of al Khwarizmi’s identity, solving a quadratic equation involving it is relatively easy.

For example suppose that we want to solve . Having already solved Q1, we rewrite this equation as

Now taking square roots, or from which we deduce that or . These are the two solutions.

And finally, we isolate

This is the famous equation that all students memorise.

Q5 (E): Use the quadratic formula to solve .

Once we know how to solve quadratics, Descartes theorem allows us a simpler way to factor a quadratic expression: just find its zeroes first, and then each of these will correspond to a linear factor!

Q6 (E) Use the quadratic formula and Descartes’ theorem to factor .

A1. We transform the quadratic expression to

We use the working of A1. to rewrite as

In this case we can take square roots, giving or , from which we deduce that or . These are the two solutions.

We use the working of A2. to write as

So taking square roots, or from which we deduce that or . These are the two solutions.

A5. Using the quadratic formula we have:

A6. Solving equation we have zeroes

You are now in a position to systematically solve all quadratic factorisation problems, without any guess work. Thank you al Khwarizmi!