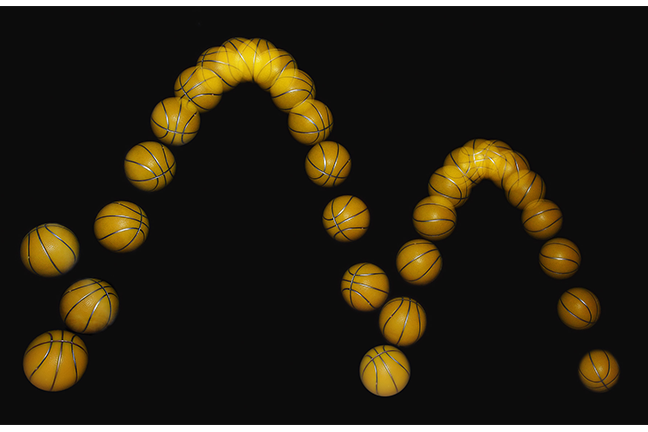 How high the ball?

How high does a basketball go? Because of the ubiquity of quadratic curves in motion and other applications, it is useful to be able to determine its maximum or minimum value. Al Khwarizmi’s formula is the algebraic key that unlocks the symmetry and position of a general parabola through understanding its vertex and axis.

The vertex and axis of a parabola

Recall that by translating a standard parabola to the form we determined that its vertex was the point .

We are now going to see how to find the vertex of a general parabola . Al Khwarizmi’s formula

is a rewrite of the general quadratic exactly in the form , which immediately allows us to see that the vertex of the associated parabola is the point

We also deduce that the axis of symmetry of the parabola, which is the vertical line through the vertex, is

Since the square term , from we deduce that if then the minimum value of is

Q1 (E): Where is the vertex and axis of the parabola ?

Q4 (C): Suppose that . Show that if then there are no solutions to the equation

A1. The parabola has vertex and axis the line .

A2. Let’s find al-Khwarizmi’s identity for . We complete the square as follows: (please study this carefully!)

The vertex of the parabola is then the point . The axis is the line

A3. For the polynomial , the coefficient of is negative. So it has a maximum value which is

As for a minimum value, there is none, as the branches of the parabola become increasingly more negative for large values of .

A4. Suppose where . This can be rearranged as

But the left hand side is a perfect square

and square numbers cannot be negative. Hence there can be no solutions to when .