This content is taken from the UNSW Sydney's online course, Maths for Humans: Linear and Quadratic Relations. Join the course to learn more.
View course
3.15 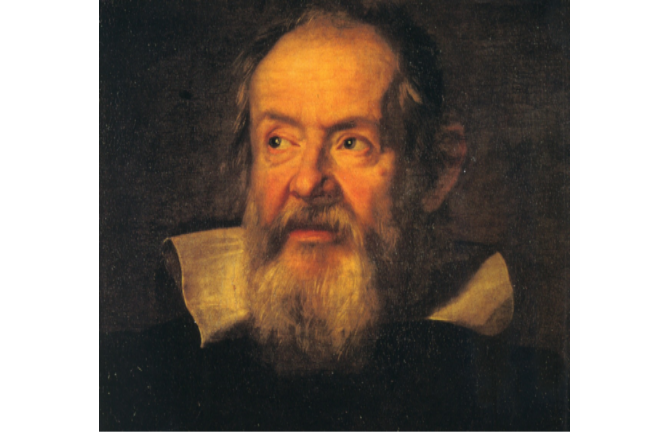 Portrait of Galileo by Justus Sustermans

Understanding what precisely happens to a ball if you toss it up in the air is crucial for physics. Qualitatively, we can say that the ball goes up, and then comes down. But can we be more precise? Galileo realized that it is a question of identifying the two quantities that describe the situation, and finding the mathematical relationship between them. And the genius of Newton came up with the physical laws that allowed the 17th century to fully resolve this essential question.

What goes up comes down

If we consider just a ball tossed up, moving in the \(\normalsize{y}\)-direction, then clearly the ball goes up, reaches a maximum, and then comes down. But this kind of qualitative description does not get us very far. How does it go up? How does it come down? Galileo Galilei (1564- 1642) was one of the first to consider carefully what was going on.

Q1 (E-C): When you throw a ball directly up in the air, does it take longer going up, or coming down, or are these times equal (assuming that you catch it at the same level you threw it)? What is your guess? Could you do an experiment to check your guess?

which has a maximum height of \(\normalsize{56\; m}\), and leaning over the side, throws a ball up in the air so that it goes straight up, and then falls to the ground below. What actually happens to the position of the ball as a function of time? This is an important physics question.

Newton’s laws and the constant acceleration due to gravity

Galileo realized that the mass of the ball does not affect how long it takes to get to the ground. Some years later, Isaac Newton described the exact nature of the gravitational force, and how force creates acceleration.

Newton’s laws showed that the really fundamental quantity was not position, as we might naively think, nor was it velocity. Rather it was the acceleration that was the key quantity, because it was determined by the forces acting on a particle.

When we put these two together, we deduce that the acceleration due to gravity, near the surface of the earth, is constant independent of mass.

From Newton’s reasoning, and some observation, we find that the constant acceleration due to gravity is (in units of m/sec^2)

The velocity of Galileo’s ball, since it starts initially with a speed of \(\normalsize{8}\), is then

and the position, which starts initially at \(\normalsize{s=48}\), is then

This gives an explicit description of where the ball is at all times. Remarkably, the trajectory is independent of mass, and even more remarkably is completely determined by the relatively simple geometry of the parabola.

Q2 (M): At what time does the ball hit the ground?

Q3. (M) What is the maximum height reached by the ball?

A4. Following the same reasoning but with different numbers, we would have the velocity