This content is taken from the UNSW Sydney's online course, Maths for Humans: Linear and Quadratic Relations. Join the course to learn more.
View course
4.12 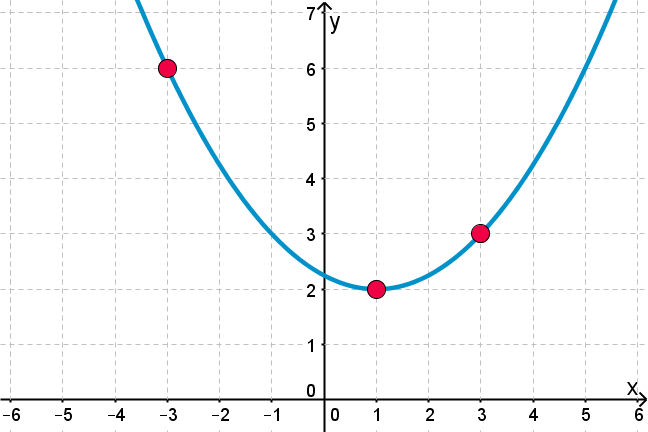 A quadratic function through three points

Another application of quadratic functions is to curve fitting, also called the theory of splines. Since a parabola \(\normalsize{y=ax^2+bx+c}\) is specified by three numbers, it is reasonable to suppose that we could fit a parabola to three points in the plane. This is indeed the case, and it is a useful idea.

In this step we see how to algebraically fit a parabola to three points in the Cartesian plane. This involves recalling, or learning, how to solve three equations in three unknowns. This is a useful skill on its own right.

Here is a GeoGebra image of this construction:

What about a parabola? Well, if we restrict ourselves to parabolas given by quadratic equations, that is curves which the form \(\normalsize{y=ax^2+bx+c}\), then since there are three unknown quantities, we can expect that we can fit such a curve to three distinct points. Let’s see how this works in practice.

Fitting a parabola to three points

This is three equations in three unknowns. This is more complicated, but in this particular case, things are simpler since the first equation already tells us that \(\normalsize{c=1}\), so the other two equations become \(\normalsize{a+b=4}\) and \(\normalsize{2a+b=1}\).

Fortunately the ancient Chinese were able to develop a general technique for solving such systems of equations. Here we just try to find a simple practical method.

What is the strategy? It is simple: we try to eliminate one of the variables, leaving us with two equations in two unknowns. This we know how to solve.

Please make sure you understand how we got that. Now we do the same with the last two equations: take the third equation and subtract the second: