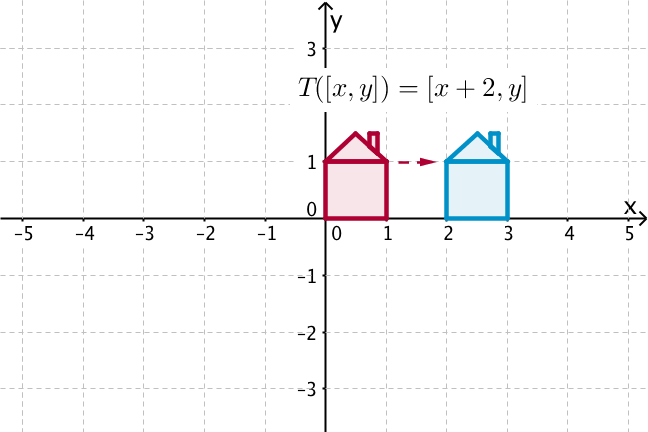 The explicit and concrete aspect of the Cartesian plane allows us to be precise when talking about planar transformations. Here we introduce translations, reflections and dilations.

In this step you will get a good visual and algebraic understanding of several types of transformations in the Cartesian plane.

Let’s see what happens to our little “unit house” if we apply some simple transformations.

The map \(\normalsize{U:[x,y]}\) to \(\normalsize{[x,y-3]}\) is a translation by negative three in the \(\normalsize y\) direction. Every points gets moved by exactly the same amount.

We can also, with a bit of experience, get at more complicated reflections by specifying what they do to points. The aim is to find the axis of reflection — that is, the mirror in which points are being reflected.

Q2 (M): Another rather important reflection is this one: \(\normalsize{F:[x,y]}\) to \(\normalsize{[y,x]}\). By graphing some points, try to figure out what is happening here geometrically.

A1. The transformation is the reflection in the vertical line with equation \(\normalsize{x=1}\).

But from that it follows that