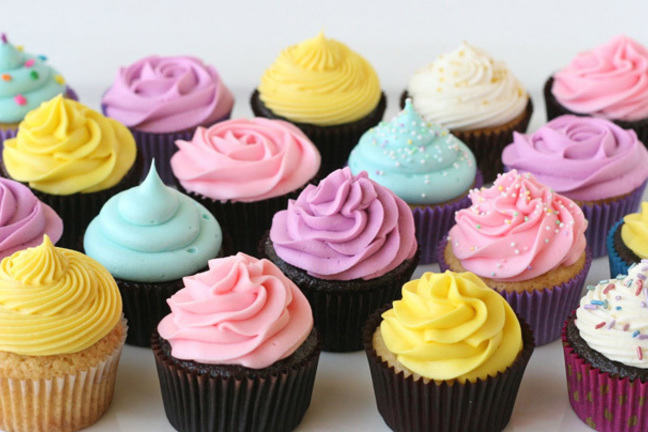 Aunt Florrie’s cupcakes were such a success at your cafe, that you decide to go into full time business selling her cupcakes state-wide! But you will have to make some important decisions to maximum your sales and profits.

In this step we will learn how the Demand and Supply curve analysis from Step 1.18 allows us to analyse profits by analysing a quadratic optimisation problem – an excellent application of our knowledge of the geometry of the parabola.

How many dozen of Aunt Florrie’s cupcakes should you plan on making every week, and how should you price them? This is an optimization problem, with only one variable quantity, namely the number \(\normalsize{Q}\) of dozens of cupcakes you will make per week.

To get some initial data, you conduct two experimental week-long “bake sales” across your state:

Q1 (E): Which bake sale was most profitable?

Here is the Quantity / Price Demand Line that you deduce from this:

Notice that this is a different Demand Line than when we were selling individual cupcakes in your cafe: it is now the line through the points \(\normalsize{[1000,8]}\) and \(\normalsize{[3000,4]}\). It is also worth remarking that in Economics the axes are perhaps not what we might naively expect them to be: economists prefer to have Quantity along the horizontal axis, and Price along the vertical axis.

The Demand Line has slope

and so an equation of the form

for some number \(\normalsize{b}\). Please check that when we substitute one of the points, we determine that \(\normalsize{b=10}\), so that our Demand Line is

Note that this equation could also be written as

Coming to the crunch

We now want to maximize Sales Income, which we’ve seen is the quadratic function

of \(\normalsize{P}\). Fortunately we know all about the shape of such functions–they are parabolas, and we know how to find the maximum values of a parabolic function!

Hopefully this shows you that maximization problems that occur in real life often revolve around the geometry of a quadratic relation, and so knowing about this geometry can help us solve practical problems.

So the first bake sale was more profitable.

A4. If we want to express Sales in terms of Quantity we use