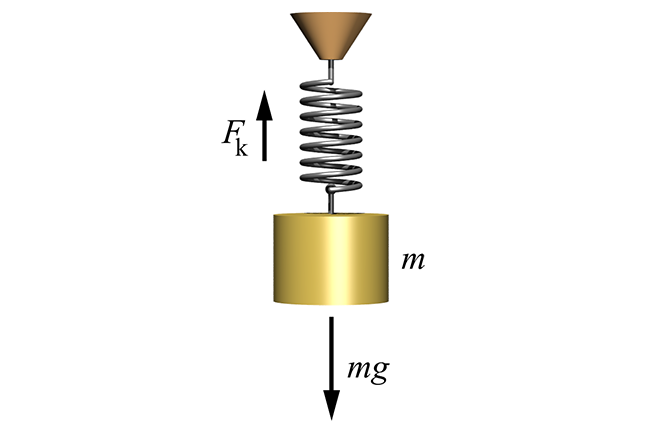 Hooke's law tells us how much a spring is extended if a weight is hung from it.

Hooke's law and the stiffness of springs

In this step you will learn

In physics, the motion of a oscillating spring is an important oscillation, that yields the familiar cosine and sine circular functions as amplitudes depending on time. The origins of this motion are in a particularly simple linear relationship that springs have, up to a point, when you displace them.

In the diagram, we see that doubling the force doubles the displacement. This is another way of stating Hooke’s law. This was discovered by the British physicist Robert Hooke in 1660, and stated as

where \(\normalsize{F}\) is the force required to create a displacement of \(\normalsize{x}\) in the position of a spring. (Sometimes this law appears with a negative sign and the meaning of the force reversed.)

How does the spring constant depend on the length?

Hopefully this makes intuitive sense — it should not be a surprise. If we think of the original spring as being two shorter springs attached together, then the mass of \(\normalsize 30\) is stretching both smaller springs by \(\normalsize 1\) mm, giving a total stretch of \(\normalsize 2\) mm.

The particularly simple relation between the restoring force and displacement in Hooke’s law has a lovely consequence for the motion of an oscillating spring. If you pull a weight on a spring down and let it go, then it will oscillate around its mean position in what is called harmonic motion.

Rather surprisingly, this is exactly identical to another fundamental motion: the \(\normalsize{y}\)-coordinate of a particle which moves around a unit circle uniformly at a constant speed. If you look at these two examples, hopefully you will see the similarities in motions.

The reason for this seeming coincidence has to do with differential equations, but it comes down to the relatively simple relation of Hooke’s law.