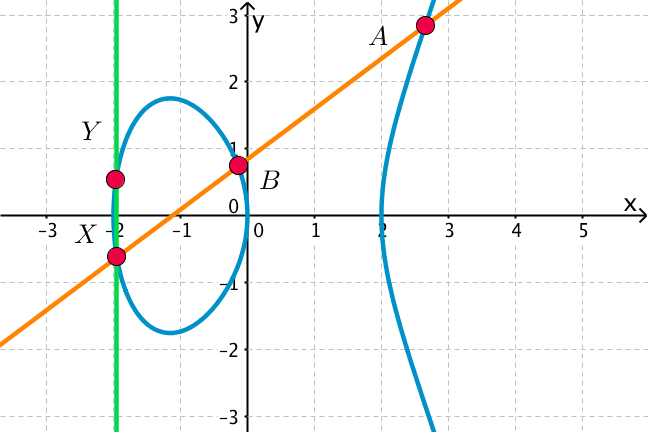 Multiplication on a cubic curve

Multiplication of points on conics and cubics (an advanced topic)

One of the reasons that mathematicians have been fascinated by cubic curves is that they have a remarkable algebraic structure which is not at all obvious. This is a novel way of “multiplying” points on a cubic curve through a curious geometrical construction.

In this (advanced) step, you will

This is a bit of an advanced topic, but we think you may find it fun. Warning: the notion of multiplication that we are going to be seeing here is not at all the same as familiar multiplication! If you have GeoGebra on your computer, you can play around and actually follow the discussion with a specific example — a great way to get a feel for this remarkable phenomenon which is surprisingly connected to interesting number theory (including Fermat’s last theorem) and modern cryptography.

Multiplying points on a parabola

Multiplying points on a general conic

Multiplying points on a cubic

Now we up the ante considerably by defining a multiplication of points on a particular cubic curve, say \(\normalsize{y^2=x^3-4x}\). This definition is a bit more involved than in the conic situation, and the multiplication is considerably more mysterious!

You can get a good appreciation of the beauty of geometry by experimenting with different initial points, and verifying that the associative property always holds. Perhaps it appears that this is all just abstract geometry without any possible application — but in internet security, exactly this kind of multiplication plays a central role in what is called elliptic curve cryptography!