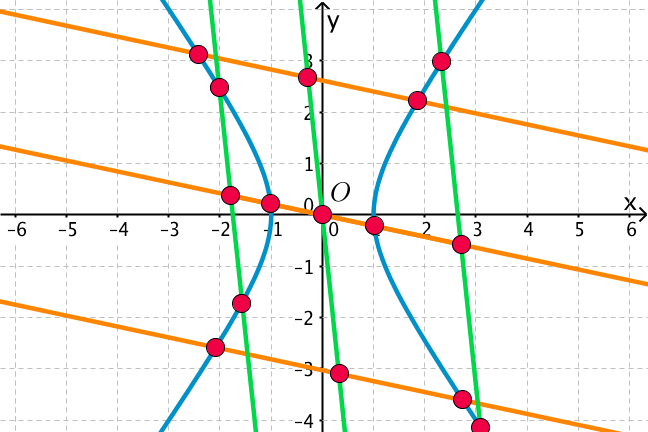 for some fixed constant \(\normalsize{e}\) called the eccentricity of the hyperbola. This condition can also be restated in terms of quadrances, which makes it more algebraic and suitable for calculation:

Let’s use the above characterisation of a hyperbola with focus \(\normalsize{F=[2,0]}\), directrix the line \(\normalsize{x=1}\) and eccentricity \(\normalsize{e=2}\) to find its equation. Using the quadrance form, if \(\normalsize{X=[x,y]}\) is an arbitrary point on the hyperbola, then

A1. Using the quadrance form, if \(\normalsize{X=[x,y]}\) is an arbitrary point on the hyperbola, then

A4. The initial image for this step shows conjugate diameters for a hyperbola. That is something we discussed in our earlier course Maths for Humans: Linear and Quadratic Relations. The idea is that if you look at chords parallel to a given diameter, that is a chord through the centre, and take midpoints of those chords, then you get another diameter. And if you apply the same trick to this new diameter, you get back the diameter you started with.