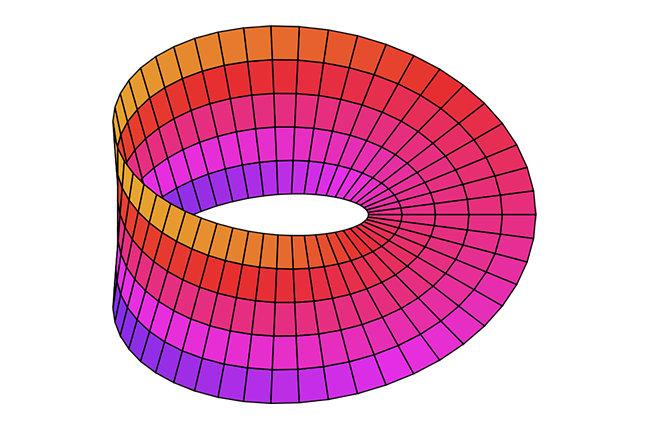 © By Krishnavedala (Own work), CC BY-SA 3.0, via Wikimedia Commons

What happens when we take the graph of \(\normalsize{y=\frac{1}{x}}\) and start to move it around by scaling it and translating it? We obtain an interesting and important family of functions, called Mobius transformations. These are special kinds of rational functions.

Ferdinand Mobius and his transformations

Ferdinand Mobius (1790-1868) was a German geometer and astronomer who was a co-discoverer, along with J. Listing, of the Mobius band, a lovely one-sided surface.

Q1 (M): Here is a classic question. Make yourself a Mobius band, just by taping the ends of a strip of paper together, after having introduced one twist in it. What do you think will happen if you cut this surface down the middle? You might like to try to visualise it first. The trick is to figure out exactly what you get.

So graphs of Mobius transformations are geometrically just hyperbolas, and are therefore conics. We can see this algebraically as well since they have second degree equations once you clear denominators.

Where are the asymptotes?

In the original example

We can also determine the horizontal asymptote by asking what happens to \(\normalsize{y}\) if \(\normalsize{x}\) gets very big positive or very big negative.

Next to polynomial functions, the simplest broad family of functions in mathematics are the rational functions: these are quotients of polynomials. For example

We see that such a function has a much more complicated shape than a simple polynomial. In particular there are vertical asymptotes, corresponding to where the denominator is equal to zero, and in this case the behaviour as \(\normalsize{x}\) gets large appears to approximate the function \(\normalsize{y=x}\).

So going from studying polynomials to rational functions is a big step! Fortunately the Mobius transformations act as an intermediate family of functions which makes the transition a lot smoother!

A1. It should be reasonably obvious that you get a single long strip, since the original Mobius band only had one edge, which we were not cutting. However a more delicate issue is: what kind of single long strip do we get – is it another Mobius band, just longer, or something else? Tell us in the comments.