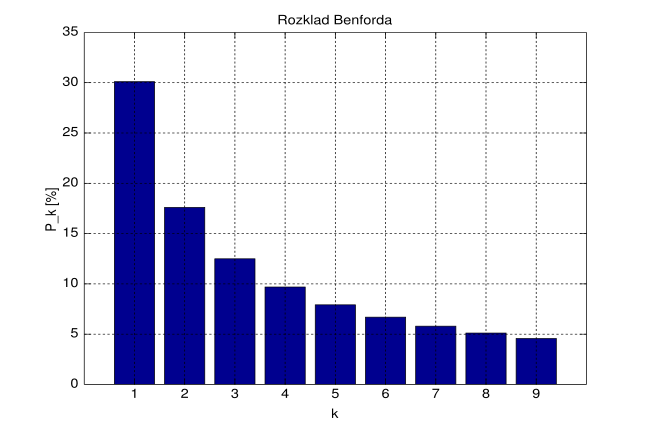 What is the first digit?

© By Gknor (Own work), Public domain, via Wikimedia Commons

It turns out that in many different contexts, when we look at the first significant digit of numbers appearing in various kinds of data, we find that the digits \(\normalsize{1,2,3,4,5,6,7,8}\) and \(\normalsize{9}\) do not all occur with equal frequency. The smaller digits are much more frequent than the larger ones, and there appears to be a systematic relationship between the size of the digit and its likelihood of occurring as a first digit.

It was put on the map in 1938 by the American physicist Frank Benford, who investigated thousands of occurrences of the law in a wide range of seemingly unrelated examples, from surface areas of rivers, population tables, physical constants, molecular weights, mathematical handbook entries, and even numbers contained in an issue of Reader’s Digest.

Relation with the \(\normalsize{y=1/x}\) function

Now in the following diagram, we see the relative sizes of these areas, where we have normalized by dividing by the total area from \(\normalsize{x=1}\) to \(\normalsize{x=10}\), namely \(\normalsize{2.303}\). Remarkably, we see exactly the numbers appearing in Benford’s law!

Investigators can use Benford’s law to suggest when data has been manipulated or made up. If you cook up the figures in your tax return, chances are your distribution of digits will be more towards uniform than Benford’s law would suggest. So a computer can sniff out suspect-looking data just by counting digits!

Here is the abstract from the paper Fact and Fiction in EU-Government Data from the German Economic Review, published in 2011.

To detect manipulations or fraud in accounting data, auditors have successfully used Benford’s law as part of their fraud detection processes. Benford’s law proposes a distribution for first digits of numbers in naturally occurring data. Government accounting and statistics are similar in nature to financial accounting. In the European Union (EU), there is pressure to comply with the Stability and Growth Pact criteria. Therefore, like firms, governments might try to make their economic situation seem better. In this paper, we use a Benford test to investigate the quality of macroeconomic data relevant to the deficit criteria reported to Eurostat by the EU member states. We find that the data reported by Greece shows the greatest deviation from Benford’s law among all euro states.

What do you think about Benford’s law? You might like to have a look at some data from some books, or the internet, and make a little tally, and tell us if Benford’s law seems to hold.