A brief history of numbers

For thousands of years mankind has counted, be it notches carved into wood or markings on cave walls, much in the way we make tally marks today. At first only whole numbers, beginning with 1, 2, 3… were used. These are called the counting numbers.

Cuneiform is one such example. This system was developed by the ancient Sumerians of Mesopotamia over 5 thousand years ago. The name cuneiform itself means “wedge shaped” as it was made by making wedge-shaped markings on clay tablets with a reed as a pen. 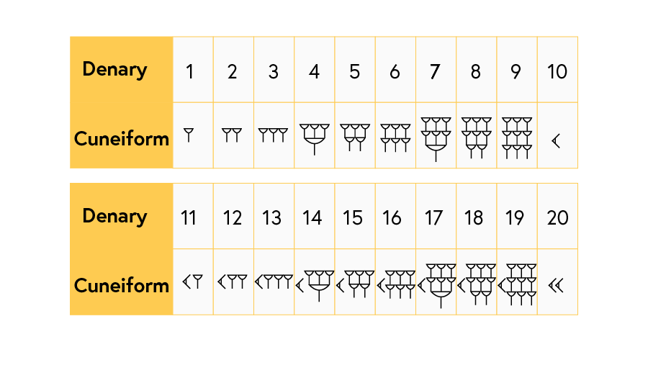 2123 is represented as two lotus plants, a coil of rope, two ‘hobbles for cattle’, and three single strokes.

Some people do not consider mathematics as a creative subject. This, however, is far from the truth. A teaching activity you may consider using is to ask students to make up their own number system based upon cuneiform or hieroglyphics. This activity enables to show their creative skills and to develop a deeper understanding of how number systems work.

Improve your mathematics understanding and learn methods for teaching fractions as a non-specialist maths teacher.