In more recent history, the Roman Empire introduced and spread the use of Roman numerals. This system continues to be used in a limited way to this day: it can be found on clock faces, in Rocky Balboa film names and for copyright dates in film and television.

The system uses a combination of just seven characters: 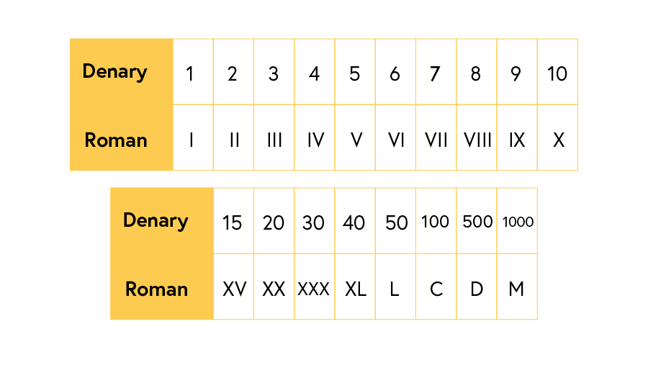 I represents one, and so II is two and III is three. Instead of IIII for four, the notation IV is used, and can be read as “one less than five”, and V represents five. Strangely, on some modern Roman numeral clock faces 4 is traditionally (incorrectly) written as IIII.

Twenty six, for example, is written XXVI, counting up: a ten, another ten a five and a one.

Twenty four on the other hand is XXIV, a ten, another ten and one less than five. If the numerals are in descending order of value, from left to right, then simply add them up, if at any point in the string a smaller value comes before a bigger value you take it away.

One hundred and nine is CIX – one hundred plus one less than ten. The order and relative size of the number the symbol represents determines whether you add it on or take it away. X, for example, always represents ten no matter where it is in the number, very much in contrast to the number system we use today as we’ll see later this week.

Before finishing this step, use either of the links below to generate a few random numbers (tip: to open these links in a new window, right click, or press and hold on a mobile device):

Convert these to Roman numerals, posting the denary and Roman version in the comments below.

If you generate zero, how would you represent this in Roman numerals?

If you haven’t already done so, you can download this week’s accompanying worksheet of questions from the bottom of step 1.1.

Now complete questions 1 and 2 from this week’s worksheet

Improve your mathematics understanding and learn methods for teaching fractions as a non-specialist maths teacher.