This content is taken from the University of Bergen's online course, Global Health, Conflict and Violence. Join the course to learn more.
View course
2.2 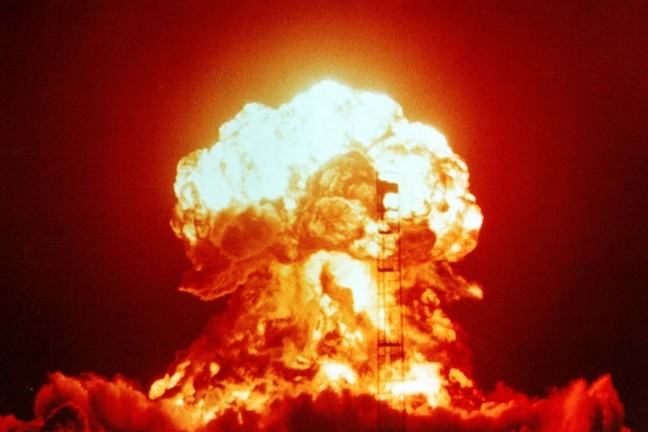 A nuclear explosion is triggered through the splitting of an atom that causes a chain reaction. This in turn results in the release of an immense amount of energy in a massive explosion many times greater than that of conventional explosives. The size of the area affected depends on the ‘yield’ (explosive force) of the bomb, measured in kilotons or megatons TNT equivalent. Most modern nuclear weapons have a yield of 100 to 300 kilotons.

When a nuclear weapon explodes, there is a blinding light followed by an intense wave of heat comparable to that of the interior of the sun. An extremely hot and highly luminous spherical mass forms, which is the fireball. The fireball from a one-megaton nuclear weapon would appear many times more brilliant than the sun at noon to an observer 50 miles away. The heat wave travels at the speed of light, vaporizing everything within a certain distance, melting solid materials at greater distances, and starting fires further away.

The heat wave initiates firestorms: oxygen is depleted and hurricane-like winds are created, attracting debris and feeding the storm itself, spreading the fire at high speeds and creating super-infernos. High levels of radiation are released from the explosion. An electromagnetic pulse releases tens of thousands of volts per metre in a fraction of a second, destroying communication, electronic and power systems. Many hospitals would barely be able to function as their equipment would be out of order. The pulse also affects motor vehicles and transporting patients would therefore be a problem. Pacemakers may cease to function, causing widespread heart failure.

Nearly half of the energy from a nuclear explosion forms a blast wave that travels at supersonic speed, levelling reinforced concrete structures and reducing all buildings to debris. The blast destroys buildings and turns bricks, lumber, furniture, cars and people into missiles. High pressures will turn a window into a thousand particles of glass travelling in excess of 150 km per hour.

As the fireball cools, the vapours condense to form a cloud in the shape of a mushroom. The mushroom cloud attains a height of approximately five kilometres in 30 seconds and eight kilometres in about a minute. The average rate of rise during the first minute or so is nearly 300 km per hour. There is a strong updraft that causes material to be sucked up from the ground and mixed with the radiation in the fireball. When this eventually falls back down to the ground – often carried by high winds much further away – the material is contaminated and is known as ‘fall-out’.

To get a sense of the effects of the small nuclear bomb that was dropped on Hiroshima in 1945, you can watch this BBC video (start at 2.28 minutes and continue until the end).