This content is taken from the University of Bergen's online course, Global Health, Conflict and Violence. Join the course to learn more.
View course
1.15

0:03Skip to 0 minutes and 3 seconds I’ve been working with three concepts. One is the direct violence, which has an actor who intends hurt and harm. It’s intended. It’s very important. And it’s usually short and quick, and sometimes lethal, sometimes not, but it is intended. Then you have the structural violence, which is the social structure and grinding of suffering, like the capitalist system does. Like is done by authoritarian regimes, and it hits people at the most vulnerable points. And those vulnerable points are called basic needs. So they can hit the wellness, health. So you have misery at the bottom of society. People die to the tune of 125,000 a day without anybody firing a bullet.

1:00Skip to 1 minute and 0 seconds They die of hunger, and they die of the diseases that are totally preventable and curable. But they don’t have the money to do anything about it. So the structure is made in such a way that they’re just the helpless victims of it. Or politically, they’re deprived of freedom. And since they are set on the monochromatic, so to speak, track with no choices, they become much less than they could be. Or their identity is taken away from them, and they’re given another identity, like let us say the 800,000 Hawaiians in Hawaii when a white man came. And so many of the children were shipped off to the mainland to be taught English, Christianity, and baseball– becoming good Americans.

1:53Skip to 1 minute and 53 seconds Now we can imagine that they landed between two chairs, neither accepted as Hawaiians nor as Americans. The structural violence is not intended, but it’s caused by a very important concept, not the actual commission, but the act of omission. The condition for maintaining the structural violence is that nobody does anything about it, so we let it happen. And somebody would even say this is normal, this is what normal society is like. It isn’t. And here we in the Scandinavian countries, we had a lot of structural violence, but very simple measures. We were able to make the society less vertical or horizontal with health resources available, all of it.

2:40Skip to 2 minutes and 40 seconds And it made a lot of difference, in the sense, from a two-class society to a one-class society. Now the gap is opening again because the poor people of yesteryear have become middle class, and have no compassion with those who are suffering today. And the gap is opening again– the structural gap. They don’t intend to harm people, but they don’t do very much to prevent it either. And then the third type of violence, what I call cultural violence, which are the aspects of culture that legitimise one or the other or both of the other two. Social Darwinism, the type of Christianity that sees sickness as God’s punishment, been extremely important.

3:27Skip to 3 minutes and 27 seconds Nationalism to justify direct violence or US exceptionalism to somehow make Americans believe that they not only a right to start killing in Iraq, but even the duty to do so. So we have a triangle with three types of violence that feed into each other.

Peace as a state of complete harmony

In the video above, Professor Johan Galtung defines violence into three different forms: direct violence, structural violence and cultural violence). One can also think about ‘hierarchies’ of violence at the mega, macro, meso, and micro level. 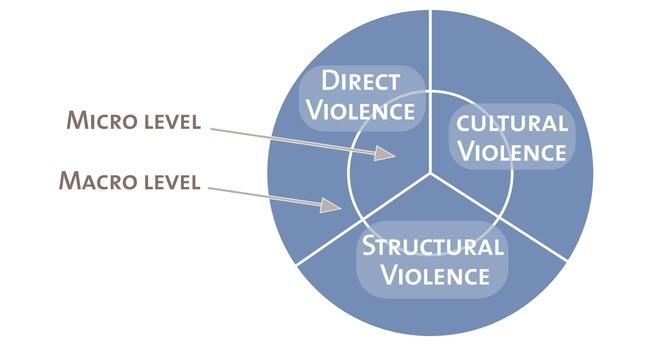 The World Health Organization uses another classification system which uses the concepts of interpersonal violence, collective violence and self-induced violence.

So far, we’ve looked at “negative peace” - peace as the negation (or absence) of violence. But it can be so much more. Let’s move on to consider “positive peace”.