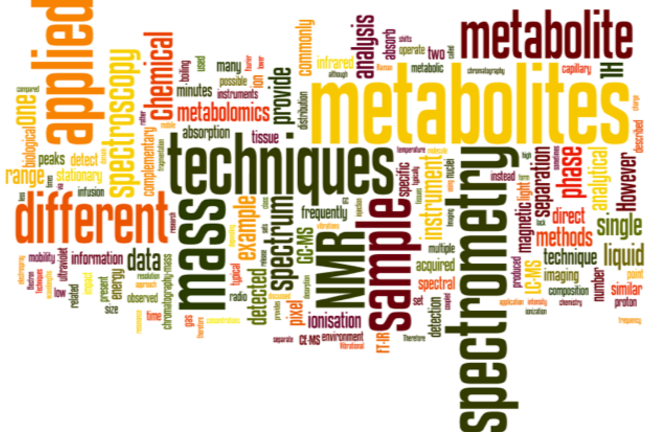 Other analytical techniques applied in metabolomics

However, there is a range of analytical chemistry instruments applied in metabolomics research with some being applied frequently and routinely whereas others have specific roles and are used less frequently.

Each instrument has advantages and limitations and no single instrument or instrument method can detect all metabolites present in a metabolome, instead multiple instrument methods or multiple different instruments are required to provide the greatest number of metabolites detected. For example, in the Phenome Centre Birmingham we will apply both liquid chromatography-mass spectrometry (LC-MS) and nuclear magnetic resonance (NMR) spectroscopy for profiling metabolomes with multiple LC-MS assays applied to increase the number of metabolites detected. Here we briefly describe other analytical techniques applied in metabolomics studies.

The separation mechanism in GC-MS and LC-MS is similar as metabolites absorb and desorb from a stationary phase. However in GC-MS the stationary phase is coated on the inside surface of a hollow silica capillary and the mobile phase is a gas, for example helium, rather than a liquid as is applied in LC-MS. Gas chromatography (GC) columns are silica capillaries of 10-60 m in length and an internal diameter of 100-500 μm. The stationary phase is siloxane (or a similar chemical composition) with varying percentages of chemical moieties. Samples are vaporised and introduced on to the GC column by the mobile phase. The chromatographic separation is optimised via adjustment of the oven temperature, gas flow rate and stationary phase composition. One strategy is commonly used for the formation of ions for mass spectrometric analysis – electron impact ionization.

Electron impact ionization is a high energy process where electrons bombard molecules in a vacuum and release an electron from the molecule to form a positively charge ion. Electron impact ionisation provides significant fragmentation of the molecular ion and produces a reproducible fragmentation pattern that can be employed for the identification of metabolites by searching mass spectral libraries.

All of these techniques provide the separation of metabolites prior to their detection with mass spectrometry providing the ability to detect metabolites at low concentrations, commonly nanomoles/litre or micromoles/litre concentrations. However, typical analysis times can range from 10-60 minutes and therefore sample throughput is lower than for direct infusion mass spectrometry or the vibrational spectroscopy techniques described below.

Nuclear magnetic resonance (NMR) spectroscopy and mass spectrometry are the two analytical instruments most frequently applied in metabolomics research. NMR spectroscopy applies the magnetic properties of atomic nuclei in a metabolite. Only some atoms are NMR active and include 1H, 13C and 31P; proton (1H) NMR spectroscopy is the most frequently applied in metabolomics. The technique operates by placing a liquid sample in a small internal diameter tube (for example a 5 mm tube), or occasionally a piece of tissue is studied directly using a special sample holder. The sample is pulsed with a range of radio frequencies covering all possible energies required for exciting the selected type of nuclei.

The nuclei absorb energy at different radio frequencies depending on their chemical environment and then the release of this energy is measured, forming what’s called a free induction decay (FID). This FID is converted from a time domain data set to a frequency domain - using a Fourier transformation - and an NMR spectrum is constructed as the chemical shift (effectively the absorption energy) plotted against peak intensity.

A metabolite that the NMR operator wishes to measure might have each proton in that metabolite present in a different local magnetic environment and therefore each proton will absorb a slightly different radio frequency. These differences are observed as different chemical shifts in the NMR spectrum. Typically, a single metabolite will produce several peaks at different chemical shifts, with some metabolites producing many peaks, for example glucose has ca. 30 peaks. Therefore a sample containing many metabolites will provide a very complex set of overlapping peaks, similar to that observed for direct infusion mass spectrometry. Complex data processing methods can be applied to deconvolve the signals from each metabolite.

A typical NMR metabolomics analysis can consist of a few NMR experiments to increase the information acquired from each sample, including 1-dimensional 1H NMR and 2-dimensional 1H, 1H J-resolved NMR. A typical analysis time for one sample is 20 minutes, although a basic 1H NMR experiment can be recorded in less than 5 minutes.

NMR spectroscopy is commonly applied for untargeted metabolomic studies. However, and unlike mass spectrometry, the absolute concentration of each metabolite can be measured from an NMR spectrum. This is possible because the signal produced by a single 1H nucleus is not dependent on the magnetic environment, which allows a single intensity calibration to be applied to all metabolites.

Vibrational spectroscopy techniques such as Fourier transform–infrared (FT-IR) spectroscopy and Raman spectroscopy have been used to analyse the metabolic changes in biological samples. The techniques operate by passing ultraviolet or infrared light through a sample, or sometimes allowing the light to reflect from the sample, before being detected. The approaches predominantly measure the vibrations and rotations of bonds related to different chemical functional groups resulting from the interaction of the sample with the ultraviolet or infrared light.

These techniques typically lack the specificity to detect each metabolite separately but instead specific parts of a molecule will absorb the ultraviolet or infrared light at specific wavelengths. For example in FT-IR, C-H stretching vibrations characteristic of fatty acid chains are observed between the wavenumber range 3100 - 2800cm-1 and the region between 1800 and 1500 cm-1 is dominated by amide I and amide II bands indicating the predominance of either alpha helix or beta sheet structures. A metabolic fingerprint is detected with a single absorption spectrum collected for each sample and consisting of information for many metabolites. This is similar to the data produced by direct infusion mass spectrometry where a single mass spectrum rather than absorption spectrum is collected for each sample. The metabolic fingerprints produced in these approaches lack the sensitivity of mass spectrometry but are a useful tool for high-throughput screening. The analysis time of FT-IR is approximately one minute per sample, although this can be lower depending on the instrument parameters applied.

All of the techniques described above typically require a sample extraction preparation method for the analysis of cells and tissues that provides a single homogenous sample and no information of the spatial distribution of metabolites in different cellular organelles or different cell types in a tissue. However, the location of metabolites can provide important information on how and why biological mechanisms operate. For example, whether a drug is concentrated in one area of a tissue related to its mode of action or is distributed across the tissue. Imaging techniques can be applied as a complementary approach to all other non-imaging techniques discussed.

Mass spectral imaging is one of the most common set of techniques applied and includes different ionisation methods:

All of these techniques separate the sample in to multiple pixels and a mass spectrum is acquired for each pixel applying one of the different ionisation methods named above. The distribution of a metabolite can then be mapped by visually defining the response of the metabolite ion in each pixel. The size of each pixel defines the spectral resolution, a small pixel size means that data for more pixels can be acquired and that spectral resolution is higher.

All of these techniques provide unique and complementary data to all other techniques but the collection of imaging data commonly requires a longer analysis times of hours compared to minutes for other techniques.