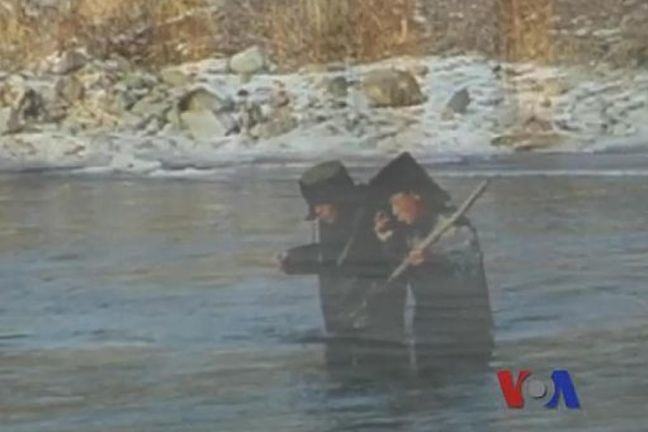 North Korean defectors attempt to cross over the Tumen River

One of the important consequences of the North Korean famine in the mid 1990s was the sudden increase in the number of refugees who escaped across the border into China and eventually to South Korea. North Korea shares a long border with China and vast stretches are not guarded. Therefore, North Koreans have always been able to cross the border into China. However, the consequences for unauthorized travel abroad could be dire, and family left behind could be arbitrarily punished. Those who are captured while escaping or forced to return to North Korea face imprisonment and sometimes even executed. The draconian measures have not prevented an estimated 200,000 or more refugees to flee to China and over 27,000 resided in South Korea by the end of 2014.

The exodus out of North Korea between 1945-1953 was considerable. Some estimate that approximately 740,000 went south between 1945-1950 and another 650,000 went south during the Korean War. Only about an estimated 10,000 people moved North during this period. A high proportion of these early refugees were Christians who faced persecution in the North. Many of the anti-communist conservative figures in South Korea’s modern history have their origins among these Northern refugees. The city of Incheon in particular became a major centre where impoverished North Korean refugees gathered because they had such difficulties in making a living in the South. The end of the Korean War in 1953 brought a sudden halt to the flow of people moving across the border. Between 1953-1989, only 607 individuals were listed as being North Korean refugees in the South and the annual arrivals were less than ten.

Beginning in 1994, the numbers suddenly rise to 52 and quickly accelerate after 2000 when 310 arrived. The highest number was recorded in 2009 when 2,914 entered South Korea. The numbers decline considerably in 2012 once the Kim Jong-un regime tightened the border controls. However, the North Korean refugees in South Korea are now form a sizeable minority and problems have emerged. Up until 2005, refugees received a cash dispersement of approximately $35,000 but afterwards the system changed into more of an incentive-based system. The North Korean refugees receive citizenship, basic housing and welfare support. A common experience among North Korean refugees is the sense of betrayal at the ideological indoctrination that they received. They spent an entire lifetime believing in the cult of Kim Il Sung and Kim Jong Il, only to discover that the prosperity of the capitalist South far exceeded the North.

Yet many North Koreans have encountered problems adjusting to capitalist life in the South. Most have adjusted to South Korean society and have no intention of returning to the North. However, a handful have gone back because of the economic hardship and discrimination they have encountered. Life in the South may be far better than their impoverished circumstances back in the North, but the adjustments have proven to be an immense challenge for many refugees.

One may ask why so few North Korean refugees left between 1953-1994, We need to keep in mind that North Korea had fared better economically than both South Korea and the surrounding areas across the border in China for several decades. However, the Great Famine triggered a mass exodus of North Koreans into China where they faced the fear of being deported back to the North. Consequently, North Korean refugees have attempted the dangerous journey to South Korea, where they form a sizeable population today.

The life of a North Korean refugee in China can be extremely difficult due to the current understanding between the Chinese and North Korean governments. The Chinese considers North Koreans to be economic refugees and therefore deport them back to the North if caught. A disproportionate number of North Korean refugees are women who are often trafficked as brides for Chinese men in rural areas. Some scholars speculate women participate more in the black market in North Korea, which allows them to gain greater access to media from the outside. Their exposure to outside influences may push them to abandon their lives in the North.

There have been dramatic scenes of North Koreans trying to get into the South Korean embassy in Beijing because of their desire to seek asylum. However, most refugees must trek all the way down to South East Asia or escape to Mongolia before they can be sent to South Korea. Refugees often tell harrowing stories of border crossings into Vietnam, Laos or Thailand. South Korean activist often operate ‘safe houses’ in countries like Vietnam that assist in the transportation of refugees to South Korea.