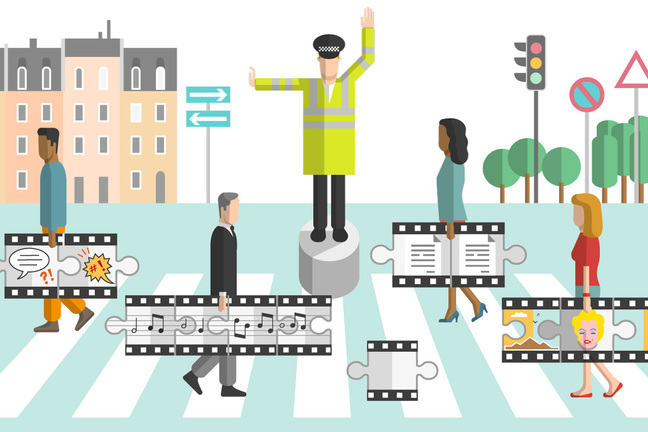 When you want to use a work that is in copyright, you need to get permission from all copyright owners. Some works have several rights attached to them and each right may have more than one owner so you may need to get permission from them all. That is not as bad as it sounds though; for many of the works you are likely to want to use licensing is made easy by organisations called collecting societies that can give you permission by selling you a licence on behalf of the rightsholders. Even so, you may need to get more than one licence when there are several rights involved.

Let’s say you want to use the track of your favourite song in a clip you are making of a special event: rights in a sound recording belong to different groups of creators and each needs to give permission. The composer of the song may be a specialist song-writer working alone or with partners, such as with someone who writes the lyrics, or it could be the band that records it. Either way, they have rights in the composition and the composers’ collecting society PRS for Music can sell you a licence to use their rights in the song. Rights in the sound recording of the song are owned by two sets of rights owners, the performers and the sound recording maker, that is, the label. Permission for them can be obtained from the PPL (Phonographic Performance Limited). You need both before use of the track in any public performance is legal, whether in your local community centre or via the internet.

Nowadays, it is pretty simple to get these permissions. You can apply to the collecting societies online and buy a licence. For some small uses, for example for making a video of your wedding, you can get a combined PRS/PPL licence.

This is just a short introduction to the different ways you can obtain a licence to use someone else’s music. You will get a better understanding of the difference between sound recordings and musical composition as well as the important role of collecting societies in week 2.

As we have seen in Step 1.5, you don’t need permission from the copyright owner to use their work if you benefit from a copyright exception. We will see some of these exceptions in more detail over the next few steps.