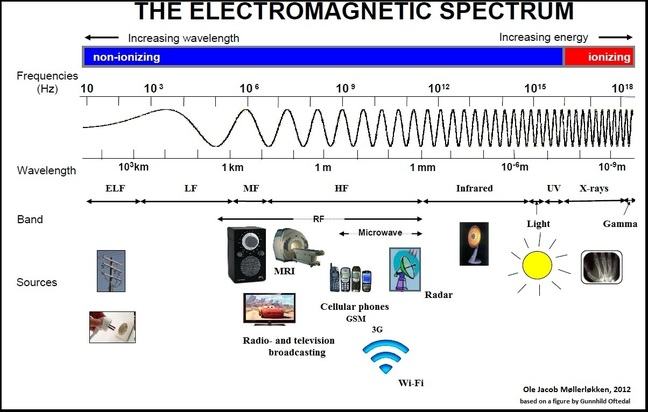 Radiation is divided into non-ionizing and ionizing electromagnetic fields and is a way of transferring energy. To produce radiation it requires a source which emits the radiation. The radiation will then disperse in the medium with the highest concentrations close to the source, and diminishing the farther away from the source you are. This dispersion leads to reduced exposure when the distance from the radiation source increases. This is often calculated roughly as Exposure = 1/distance2. 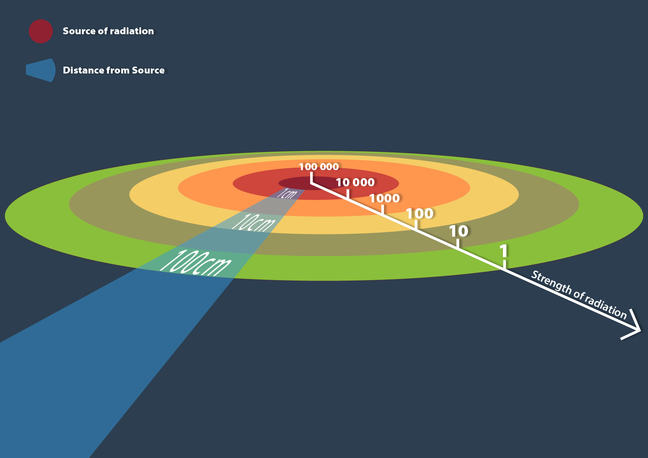 Objects hit by radiation will absorb some of it. The amount of absorption depends on the type and magnitude of the radiation, the time-span of exposure and the tissue exposed, as different tissues will absorb different amounts of energy. This can be illustrated by the differences in the absorption of solar energy between a metal- or wooden bench in the sun; the bench made of metal will become much warmer than the wooden bench, even though the amount of radiation energy received is the same. 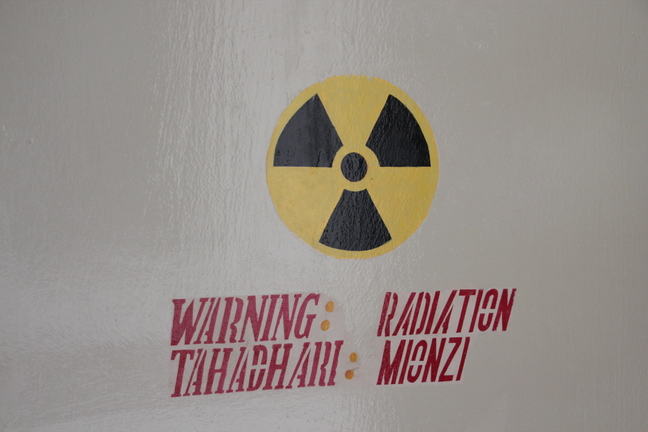 Sign for ionizing radiation on a hospital door in Tanzania. © G. Tjalvin

This type of radiation possesses enough energy to cause ionization of molecules or atoms, which can cause active and potentially damaging processes in cells and living things. The ionizing radiation may be described in different ways, one is by the term “Becquerel”. This describes the radioactive activity of the material defined as being the number of nucleous decays per second. More descriptive of the energy absorbed per amount of tissue is the term “Gray”, but even more descriptive is “Sievert” which also takes into account the radiated tissues ability to absorb the radiation.

The non-ionizing part of the electromagnetic spectrum does not have the ability to ionize molecules or atoms, but NIR can harm by other mechanisms, depending on the amount of the non-ionizing radiation and the time-span of exposure. It is descried as “Volt/m” for electric fields and “Tesla” for magnetic fields. These different values for electric and magnetic fields can be combined to give rise to the unit known as Specific Absorption Rate (SAR). This describes how much energy is absorbed by human tissue.

Legislation on issues related to radiation and health may differ from country to country. The International Atomic Energy Agency has published a report entitled “Agency Radiation protection and safety of radiation sources: International basic safety standards – Interim edition”, which is posted on the web pages of ILO:

There are also two other organisations which have published information that can be useful when discussing such topics:

a) The International Commission on Radiation Protection (ICRP)

b) The International Commission on Non-Ionizing Radiation Protection (ICNIRP)

ICNIRP provides scientific advice and guidance on the health and environmental effects of non-ionizing radiation (NIR) to protect people and the environment from detrimental NIR exposure. ICNIRP is an independent non-profit scientific organization chartered in Germany. It was founded in 1992 by the International Radiation Protection Association to which it maintains close relations. The mission of ICNIRP is to screen and evaluate scientific knowledge and recent findings toward providing protection guidance on NIR. The commission produces reviews of the current scientific knowledge and guidelines summarizing its evaluation. ICNIRP provides its science-based advice free of charge. In the past, national authorities in more than 50 countries and multinational authorities such as the European Union have adopted the ICNIRP guidelines and translated them into their own regulatory framework on protection of the public and of workers from established adverse health effects caused by exposure to non-ionizing radiation. ICNIRP consists of a main commission of eight members, covering the fields of epidemiology, biology and medicine, physics and dosimetry and optical radiation. The members are scientists employed typically by universities or radiation protection agencies. They do not represent their country of origin, nor their institute and cannot be employed by commercial companies. ICNIRP is widely connected to a large community working on non-ionizing radiation protection around the world. You can find more information about ICNIRP on their web site

In addition, you might also find information of interest on web pages of the association International Radiation Protection Association (IRPA). IRPA was formed in 1965. The primary purpose of IRPA is to provide a medium whereby those engaged in radiation protection activities in all countries may communicate more readily with each other and through this process advance radiation protection in many parts of the world. It is a major task for IRPA to provide for and support international meetings for the discussion of radiation protection. The International Congresses of IRPA itself are the most important of these meetings. These have been held about every four years since 1966. You can read more about IRPA here