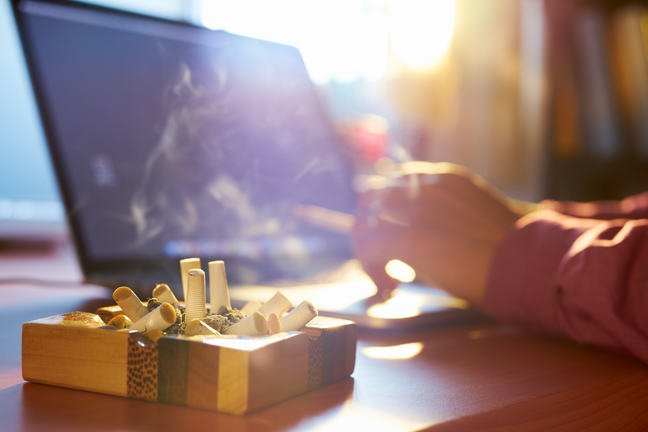 Passive smoking at work reduces the quality of the indoor air. © Colourbox

In this scientific area, there are several expressions that need to be clarified. The terms “indoor environment”, “indoor climate” and “indoor air” usually, and in this context, refer to indoor non-industrial exposure, including indoor environment and exposure inside transport vehicles.

WHO guidelines for indoor air quality cover indoor settings in which the general population or especially susceptible population groups such as children, elderly, asthmatics etc. are potentially exposed to indoor air pollution . These include homes, schools, day care centres, public places such as libraries or institutionalized settings such as nursing homes.

As you may understand from all the factors and definitons above, a risk assessment of indoor air can be complicated. The issue has been much discussed the past years. The European Commission requested the Scientific Committee on Health and Environmental Risks (SCHER) to prepare an opinion on risk assessment on indoor air quality.

The general conclusions and recommendations states that:

“Indoor air may contain over 900 chemicals, particles, and biological materials with potential health effects. The composition and concentrations of the different components in indoor air vary widely and are influenced by human activities. Since it is not feasible to regulate all possible scenarios, prevention from possible health effects and protection of sensitive populations is best achieved by reducing exposure. As a consequence, the SCHER recommends that all relevant sources that are known to contribute should be evaluated. Such sources include tobacco smoke (passive smoking), any open fires including candles, building materials, furniture, pets and pests, use of household products, as well as conditions that lead to the growth of moulds. Constructers, maintenance personnel and inhabitants should also be aware that appropriate humidity avoids annoyances and sufficient air exchange reduces accumulation of pollutants”.

Knowledge has accumulated concerning the effects on health caused by exposure to agents present in indoor air. Among these are infectious and irritative respiratory diseases, respiratory allergy (for example, to house dust mites, animal fur and dander), asthma, and mucous membrane irritation. However, there is not a clear establishment of causal mechanisms. Often the impact of indoor work environment on health, well-being, and productivity is related to nonspecific symptoms related to being in certain buildings or rooms, usually in non-residential buildings such as offices, educational buildings and hospitals. These experiences were summarised at a meeting within WHO in 1982 and this combination of symptoms were denoted as “Sick Building Syndrome”, SBS. It is typically non-specific symptoms, usually perceived to be related to the indoor environment in non-industrial buildings as they improve, or disappear, when the affected person is away from the indoor environment. Symptoms that have been associated with low quality of the indoor air are various non-specific symptoms from eyes, nose, throat, skin and general symptoms including headache and tiredness.

The indoor air environments are complicated to study and evaluate. The amount of dust and chemicals involved in such exposures are very low. The perception of the situation is clearly influenced by the workers themselves. The important thing in office environments is to listen to the workers, and to hear what type of problems they experience.

Prevention is of course important here, as at all workplaces. The construction of an office environment is important. The planning must consider first of all what work the worker is supposed to be doing and what type of workplace will be most functioning in that respect, including all five indoor climate factors (thermal, atmospheric, acoustic, actinic and mechanical environments). 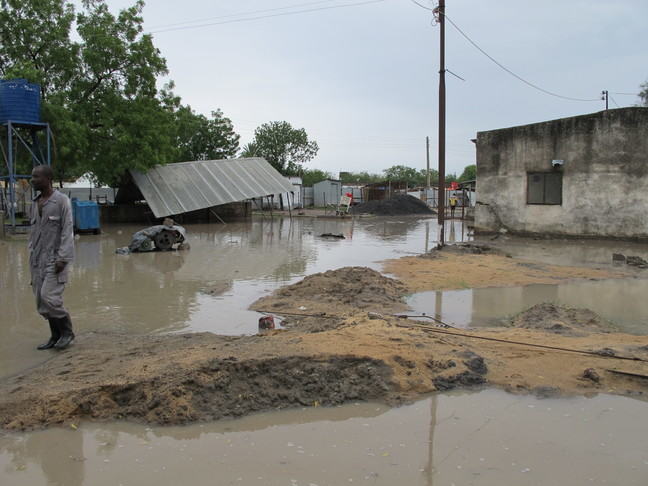 A hospital building in Sudan one day after a heavy rain fall. The building was in a terrible state and was torn down in 2012. ©Turid Andreassen

Here is an example of health problems related to a house with moisture problems in Sudan. The photo above shows a hospital one day after a heavy rain fall. The building was in a terrible state and was torn down. A new house was built, unfortunately with a flat roof where the water gathered after rain. Half a year later, the building looked like in the photos below.

Parts of the new hospital had a flat roof, and the rain ended up as a pool of water on the roof top. Moisture entered the walls. ©Turid Andreassen 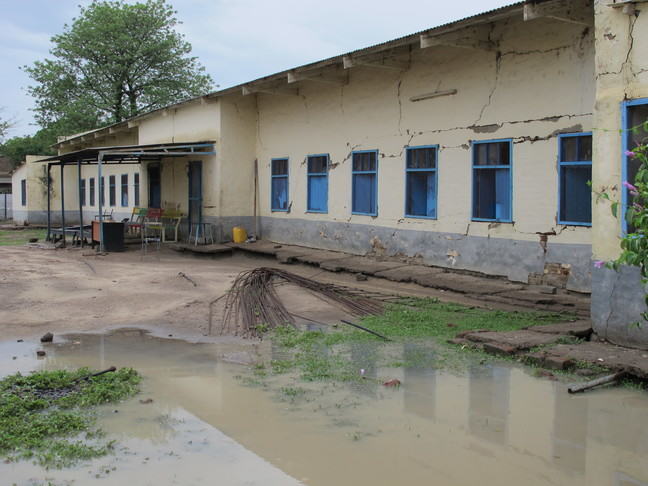 This hospital building has large cracks in the wall. Such damage may come after moisture inside the walls. ©Turid Andreassen

The soil in this area is called black cotton soil, a kind of moving ground, and responsible for the cracking of the walls in brick or concrete houses. Even though the house was fairly new, large cracks were seen, and the walls were very moist. A terrible smell developed in parts of the house. The patients refused to stay inside, and moved out under a shed. Two of the nurses developed asthmatic attacks and refused to work in the house.

The current scientific view is that dampness in buildings is a risk factor for health effects both in domestic and in work environments. Dampness in buildings appears to increase the risk for health effects in the airways, such as coughing, wheezing and asthma. Moisture in buildings can be in the form of water vapour or as free water.
There are four main sources for ‘‘dampness’’ and moisture in buildings:
1. Leakage of rain and snow into the building construction or moisture from the ground.
2. Moisture from humans and indoor activities, e.g. cooking, bathing, human expiration, humidifiers, etc.
3. Moisture within building materials and constructions from the time of building due to lack of protection against rain and snow, or due to insufficient time for drying out, e.g. humidity in concrete floors.
4. Water leakage from e.g. pipes, flooding and other types of accidents.

The Legionella bacteria is common in nature, but in low concentrations. Its growth is enhanced by ideal temperature conditions (20 – 50 degrees Celsius), a pH of 6-7 and low concentration of salts. The most important risk sites are cooling towers, shower facilities, bubble baths, air conditioning and ventilation systems. It is an airborne infection, varies in severity from a mild febrile illness to a serious and sometimes fatal form of pneumonia, transferred by aerosols from water, and can of course also be transferred from person to person. 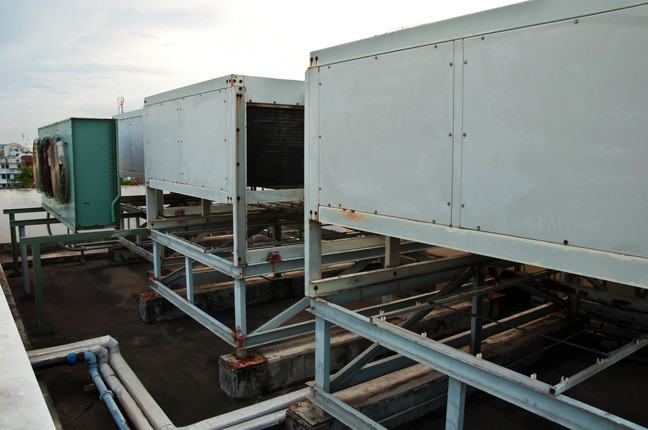 Cooling towers are a common source of Legionella outbreaks. © Colourbox

Control of Legionella growth can occur through chemical or thermal methods. Some countries have specific environmental regulations mentioning how to prevent the Legionella problem.

Suggested reading for interested: Fact sheet no. Legionellosis from WHO, 2014