0:04Skip to 0 minutes and 4 secondsDr. Vera Ngowi is an expert on the effect of pesticides on health and environment. In farms like this one in Moshi, Tanzania, pesticides are in common use. - It is important to learn about pesticides, because pesticides are synthetic chemicals that were synthesised to kill. And they dont only kill pests but they also kill people, if people dont handle them with care. So it is important to know how toxic these chemicals are, and to know how to protect yourself.

What are pesticides, who becomes exposed and how

In most developing nations, agricultural activities have so far been the most important factor for the countries’ economy. The majority of the populations in developing countries is dependent on this sector for production of food. The use of chemical pesticides has increased in a large degree the past years, and therefore we think knowledge about these substances is very important for you, when you learn about occupational health. The substances are used by a large number of persons working in agriculture, and the substances are a problem for the health of many workers in developing countries. 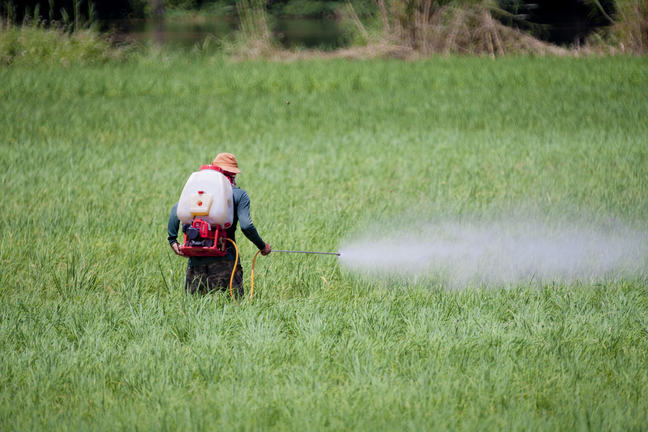 Manual spraying of pesticides in a rice field. © Colourbox

The farmers spray their fields to avoid pests from destroying their crops. Pesticides are substances meant for attracting and then destroying, or mitigating pests. The substances can be chemical agents or biological agents. While the use of pesticides has helped the nations to dramatically increase their agricultural productivity, extensive and inappropriate use of the pesticides cause serious adverse health effects worldwide. The sprayers of pesticides are at highest risk of intoxication, as their exposure might be high. Many pesticides are very toxic and must be handled with care. When this does not happen, serious intoxication may occur.

The use of pesticides in agriculture has been associated with negative public health effects worldwide. Several studies conducted in countries like Brazil, Bolivia, China, Ethiopia, India, Tanzania and Thailand have shown that farm workers are exposed to high levels of pesticides and develop intoxications.

60 % of them are from
developing countries

WHO reports that 1.3 billion workers in agriculture experience intoxications annually and 60% of them are from developing countries. The International Labor Organization (ILO) tells that

There are at least 500 000
serious acute poisonings worldwide
every year, and of them are
at least 9 000 lethal.

The figures above are related to the agricultural workers, like farmers and sprayers of the pesticides. Other workers who can be exposed to pesticides are the producers of the substances and inspectors of agricultural areas. In addition, it is of importance to know that also residents near the farms may be exposed to pesticides, for instance by airborne exposure during spraying from airplanes and also by contamination of drinking water. The exposure to pesticides can happen by different exposure routes; by inhaling air containing the substance(s), by skin exposure or by per oral intake. The peroral intake is often due to accidental drinking, for instance when pesticides are put in a bottle without a label.