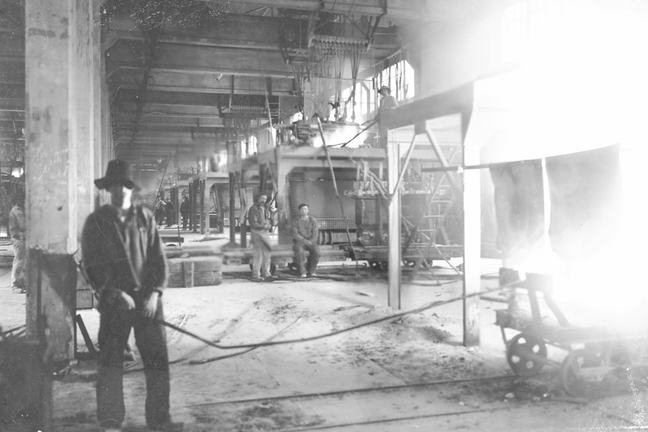 Tapping a furnace in a Norwegian smeltery, dated around 1910.

Since this course is developed by a Norwegian university, we will present some historical aspects of the development of occupational health services in Norway as this might be of particular interest for a developing country that is about to establish their own OHS units.

Today, Norway is an industrialized country with a relatively high standard of living. The process of industrialization in Norway began to accelerate after 1905. Before that time, up till about 1880, however, Norway had been among the poorest and least developed countries in Europe. Income-levels, living conditions and education varied greatly, and many workers suffered due to bad working conditions. It was a situation that is comparable to the situation in many developing countries today. 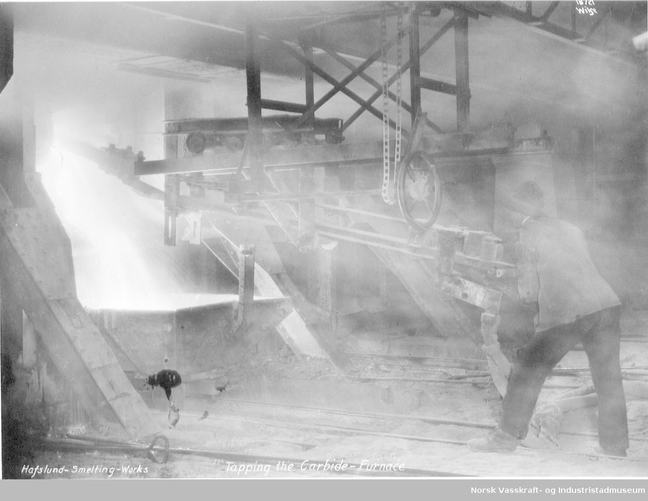 This worker is tapping a carbide furnace in a Norwegian smeltery, dating from around 1925. Melted carbide has a very high temperature of 2100°C, but the worker is not using any kind of personal protective equipment. © Norsk Vasskraft- og Industristadmuseum 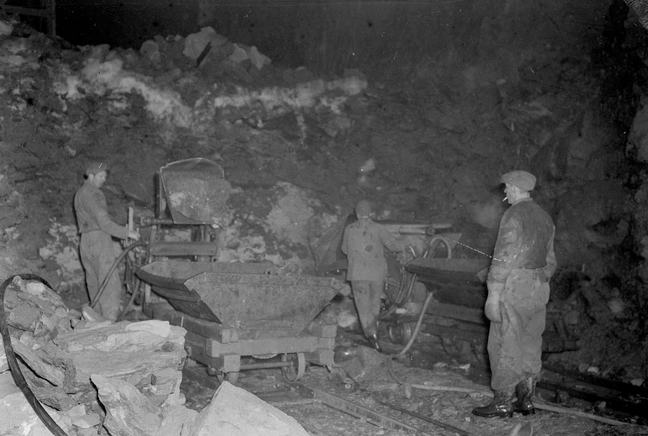 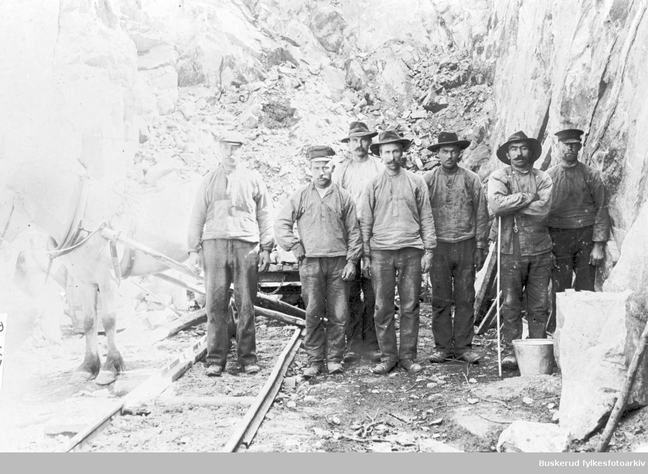 Workers building one of the main Norwegian railroads, 1906. © Buskerud Fylkesfotoarkiv

Originally, the physician’s work at companies was purely curative

The first physicians working in something that resembles occupational health services in Norway were employed at silver mines during the eighteenth century, treating a variety of diseases among mine workers. The work focus was curative, and both lung disorders due to the dust exposure and tuberculosis were common. Later, the need for this type of work expanded to also include factories, and physicians in Norway were employed at different types of industrial plants. They continued to do mainly curative work until about 1917. In the period 1917-1977, however, the focus changed so that these physicians became more concerned about the health of the individual and how to promote the health for each individual worker. Surveys of the workers included for instance an evaluation of the nutritional status; to be strong and well-nourished was for instance a good protection against tuberculosis. 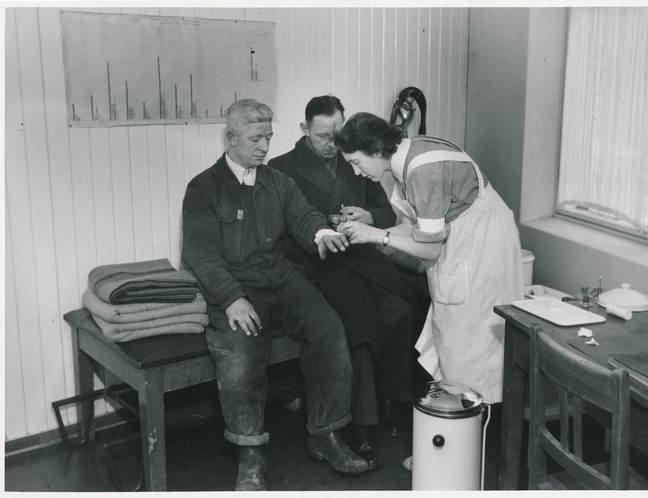 An occupational nurse taking care of a worker who has cut himself. This is a typical type of curative work in occupational health units. © Ø. Larsen 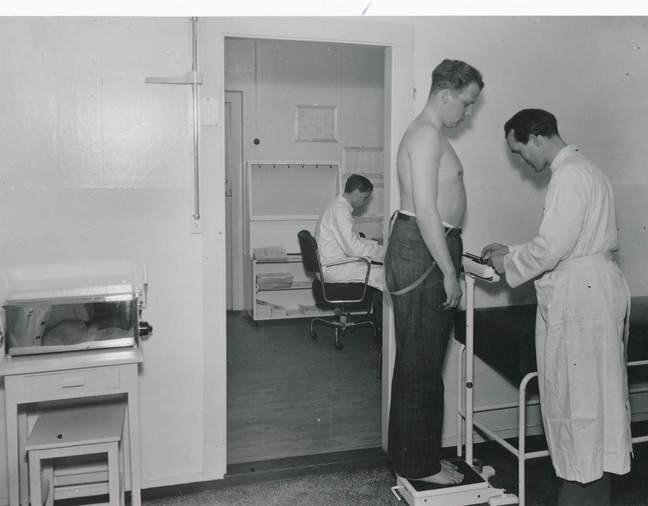 When occupational physicians started to perform preventive work, then not only the health aspects related to the work situation came into focus. Some factories had programs to improve the general health of the workers. Low weight posed an extra risk of developing tuberculosis, and therefore, checking the weight of the workers was important, like you see on this photo. © Ø. Larsen

From curative work to preventive work

A few physicians started to work on preventive issues in the factories in the early 20th century, and an agreement about the company doctors’ work was signed by the Norwegian Medical Association and organizations for employees and employers in 1946. Occupational health services were later specifically regulated in the Norwegian Work Environment Act of 1977. This act emphasized that the primary task of company physicians was to address preventive issues at the workplace. The physician worked at first together with nurses, but in the last part of this period they also included physiotherapists in their teams. 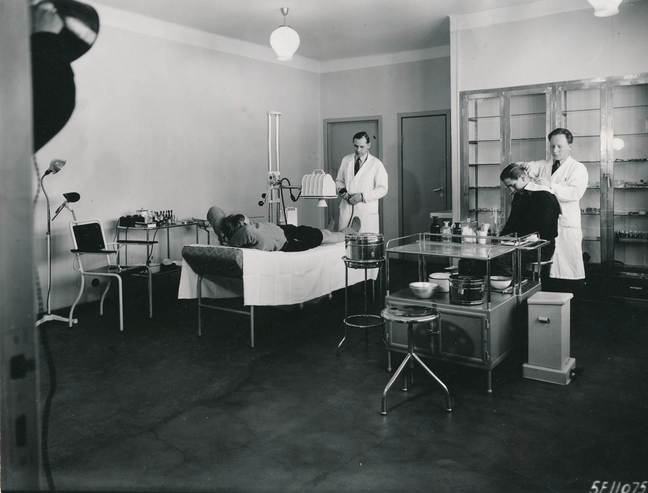 The first Norwegian occupational physicians were particularly interested in work-related diseases, such as lung diseases and hearing problems. Here, the physician to the left is operating an x-ray machine, which could be used to examine the lungs. The physician to the right is cleaning the ears of a worker before testing the hearing. © Ø. Larsen 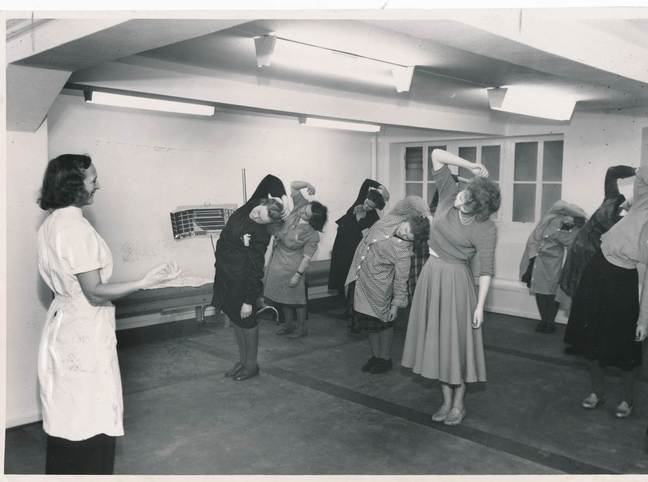 In some factories, physiotherapists had sessions with physical exercise for the workers. Such programs were developed by the multidisciplinary teams in the occupational health units. © Ø. Larsen

Industries were instructed to have OHS by regulations

Requirements for the OHS to be certified

In 2010, new regulations for OHS in Norway were developed. Today, an OHS needs to be certified by a special unit at the Labour Inspectorate to be allowed to give services to the companies. There are requirements about, for instance, types of professions who should form the OHS, their competence/profession and work plan. The requirements related to the physicians in the OHS have been unclear, and some OHS have reduced the position of the physician to a minimum. This seems to be negative for the OHS as the number of competent physicians in the OHS is decreasing. While such regulations can minimise unserious activities within the field, there are also disadvantages in being over-regulated. It is important to make useful regulations of OHS in a country, regulations which are motivational to this important work and which includes the input from as many different groups of health personnel as possible. OHS units are important tools in the battle against occupational injuries and diseases.