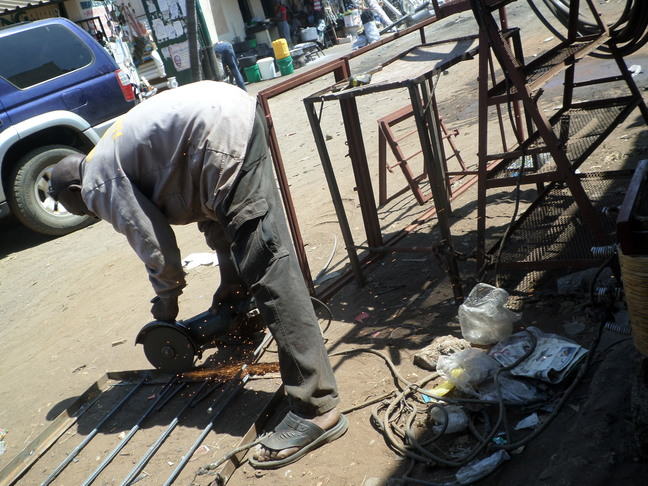 Use of hand-held tools, like this metal-cutter, produces both noise and vibration. These factors can affect the health of the worker. © Jessy Z’gambo

Noise is the subjective equivalent to the physical phenomenon called ‘sound’. Noise is defined as unwanted sound. Physically, the expression ‘sound’ is a series of small pressure variations around an equilibrium. The magnitude of these variations is described by the expression ‘sound pressure’, and the variation rate is described by the ‘sound frequency’. The sound pressure is expressed in pascal (Pa). The pressure may be given in absolute unites; pascal= Newton/m2. However, it is customary to use a logarithmic scale, and express the sound pressure in decibels (dB) in relation to a reference pressure. The softest or weakest sound pressure level a normal human ear can detect is about 0 dB. At sound pressure levels above approximately 130 dB the sensory sensation is more associated with pain than sound.

The ‘sound frequency’ is the number of pressure variations per second, and is expressed in Hertz (Hz). Pitch is the subjective equivalent to the physical phenomenon frequency. Higher frequencies are associated with a higher pitch. The normal human ear can detect frequencies roughly in the range 20 to 20 000 Hz.

The human ear is not equally sensitive to sounds at different frequencies. The highest sensitivity is in the range between 2000 – 4000 kHz, and it decreases towards higher and lower frequencies. To account for this non-linearity, weighting networks have been developed. The most common weighting networks are designed to approximate the equal-loudness curves at low (dB(A)) and high sound pressure levels (dB(C)). 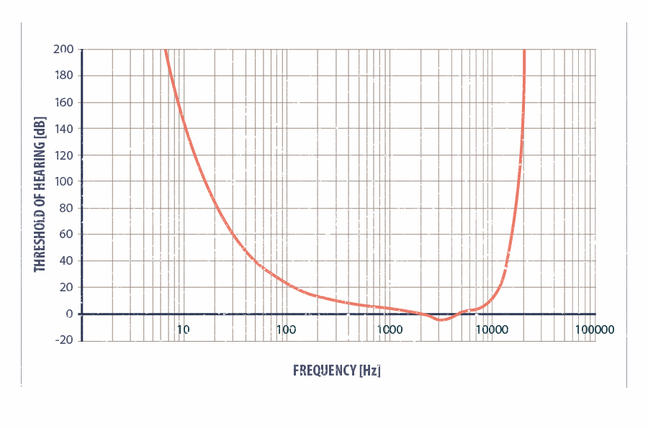 The hearing ability of humans. © University of Bergen/Arjun Ahluwalia

Sound enters the auditory canal/ear and reaches the ear drum, which starts to move. The energy from the sound wave is then transferred through the bones of the middle ear to the oval window of the fluid-filled cochlea. The basilar membrane, which runs along the cochlea is set in motion. This has a maximum amplitude close to the oval window for high frequencies and closer to the apex for low frequencies. The organ of Corti which is connected to the basilar membrane, contains sensory cells with stereocilia or hair cells. When the basilar membrane moves, the “hairs” are deflected, resulting in a synaptic transfer of an impulse to the auditory nerve and further to the central nervous system. 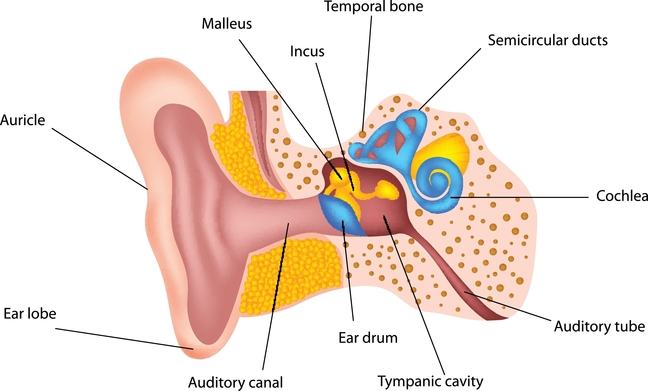 Anatomical model of the ear showing the basic components. © Colourbox

Noise exposure is associated with both auditory and non-auditory effects.

A temporary threshold shift (TTS) is a normal response to loud noise exposure, and recovery ensues after a certain period of rest under low noise conditions. Excessive exposure to high noise levels may cause a permanent threshold shift (PTS), known as noise induced hearing loss (NIHL). 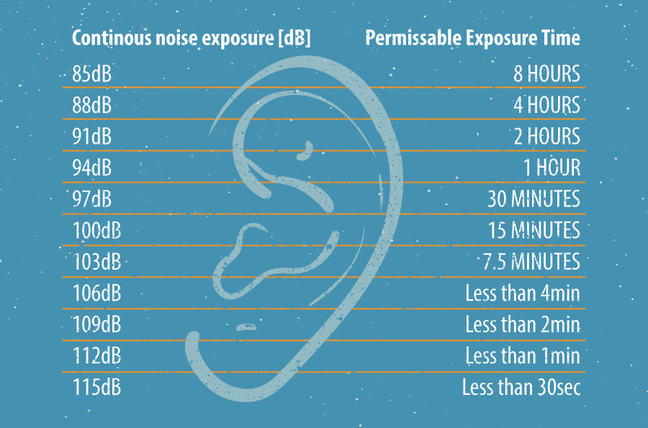 Illustration of the time necessary to reach the limit for increased risk of hearing loss related to sound intensitites. © University of Bergen/Arjun Ahluwalia

The figure above tells us how long we can be exposed to different noise levels without increasing the risk of developing NIHL. For a normal, eight hour working day, our ears can tolerate a level of 85 dB(A), but not higher. As the decibel scale is logarithmic, an increase of 3 dB corresponds to a doubling of the sound pressure, and the exposure time needs to be halved. The hearing ability can become acutely and irreversibly damaged when exposed to sound levels above 130 dB(A).

Hearing loss is usually assessed through a procedure known as audiometry. Audiometry is a hearing test performed in a quiet room where an audiometer delivers tones of specific frequency and loudness to the worker who then has to give a signal if he or she hears the sound. The examiner can increase or decrease the loudness, depending on the response from the patient, to determine the hearing thresholds for different frequencies. A person’s ability to hear is displayed in an audiogram. 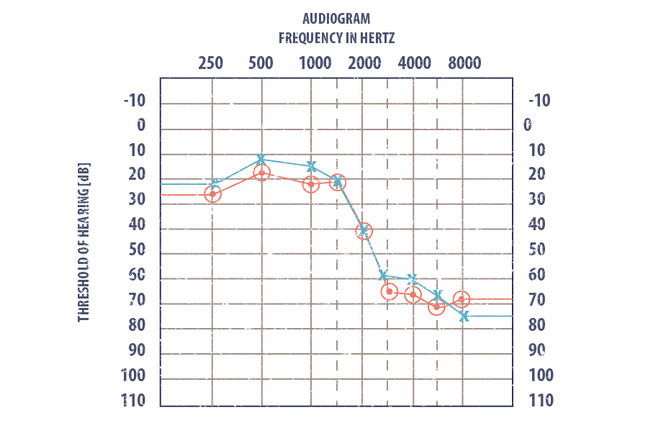 An example of an audiogram from a person with severe threshold shift. A young person will normally hear all frequencies at 20 dB or less. In this audiogram it is displayed that the person needs to have 60 – 70 dB on the frequencies 3000, 4000, 6000 and 8000 Hz to hear the sound. Such a hearing loss may indicate noise exposure damage. © University of Bergen/Arjun Ahluwalia

It is important to conduct regular hearing tests in occupations with noise exposure. The frequency of such testing should be decided in relation to the risk assessment, whic itself is related to the noise exposure. However, generally it is recommended to perform the test at the time of employment, after 6 months of work and then every year thereafter if the noise levels are high. To ensure reliable results on the test it is important to take into account several things; that the worker is not exposed to noise during the 12 hours preceding the test, that he does not suffer from allergy or cold at the time of the test, and that his ears are free of ear-wax. The test should be performed in a very quiet room, preferably in a sound-insulated audiometric booth, and the test personnel should be educated in audiometric procedures and have good routines for correctly maintaining of the equipment. 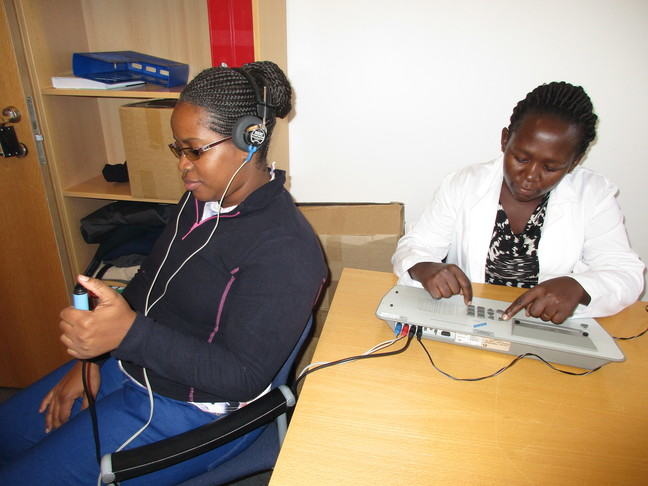 Here, audiometry is performed in a quiet office, without a sound-insulated booth. The worker hears sounds at different frequencies, and presses a button when she hears them. The examiner sees a light on the instrument panel when the button is pressed, and can note the results. © G. Tjalvin

The hearing damage received is dependent on what frequency noise you have been exposed to. Most typical for industrial noise damage is a hearing loss in the frequency area 3000 – 6000 Hz. Unfortunately, this range is the same as that for human speech. There is no treatment for hearing loss other than making sure that the hearing loss does not progress. To avoid increasing hearing loss, it is important to avoid noise exposure and to protec the remaining hearing ability. This is done through risk assessment, hearing protection, regular follow up with hearing tests and equipping the person with hearing aids, which are small amplifying apparatuses in the ears. 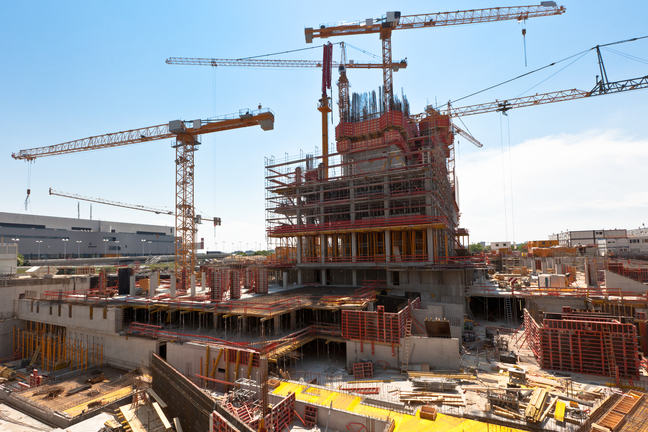 A construction site can be a noisy workplace. © Colourbox