This content is taken from the University of Basel's online course, One Health: Connecting Humans, Animals and the Environment. Join the course to learn more.
View course
5.7

Extending surveillance: humans and their livestock

Demographic information is foundational for the planning and management of social programmes, in particular health services. The existing INDEPTH network surveillance sites are limited to coverage of sedentary populations. Including mobile populations in this approach would be expensive, time consuming and potentially low in accuracy. Very little is known about the demography of mobile pastoralists and their animals, so innovative approaches are urgently needed.

We carried out a study to test and evaluate a mobile demographic surveillance system for mobile pastoralist households, including livestock herds, using mobile phones. Mobile pastoralist camps were monitored, ten for 12 months and ten for 18 months, using biweekly mobile phone calls to camp leaders and their wives to conduct interviews about the households and livestock. Collected information was validated through personal visits, GPS data and a livestock demographic model.

Willingness to participate was ascertained with the head of each mobile pastoralist camp. After initial agreement, in accordance with cultural norms, the camp head designated which herd would be included in the study, either his own or that of a son.
A camp herd was defined as the animals that were regularly kept together, often including several, closely related households. The camp herds included cattle, goats, sheep, camels, donkeys, horses and chickens, although all participating communities were primarily cattle breeders. The designated camp herd, along with the households to which the included animals belonged, was enrolled in the cohort.
A household was defined as the members who eat and live together. Usually, each wife had her own household, so the husband was counted only in the household of his first wife.

After enrollment, every two to four weeks a telephone interview was conducted, first with the leader of the camp or the specific camp herd, who provided information about the herd, and then with his wife who provided information about family members of all included households. It was a priority to involve both men and women in the study to obtain more complementary information. If the wife was unavailable, the entire interview was conducted with the male participant. Interviews were conducted in the local language of each ethnic group or in Chadian Arabic, and the data were then translated into French to complete the questionnaires.

After each phone interview, 1’000 FCFA (about 2 USD) was transferred to the participant’s phone as a small compensation for participation. The transfer amount was doubled if the wife also participated in the interview, which was an effective incentive resulting in substantial female participation.

The calls were made from a central village in the area where there is a weekly market, which is often visited by mobile pastoralists. The interviewer was a local health worker who was well known to the pastoralists. He made an appointment with each participant prior to every phone interview, followed by a reminder a few days prior to the appointment.
This approach led to high compliance as the participants made great efforts to attend the interviews, reportedly climbing trees or travelling to nearby places with reliable network coverage. 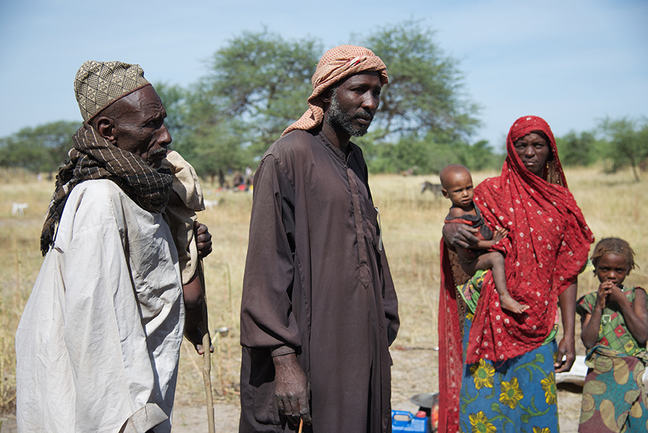 During each telephone interview, the position of the camp and distance from the last camp location were orally reported. The narrative description of the localisation was transferred to an oversized Google earth™ map, with a scale of 1:25’000 of the study area. The resolution allowed for visual identification of the villages, and positions of camps were localised and geo-referenced. The locations were validated during field visits, when the positions were recorded with GPS devices. The distance between reported and actual position was calculated using ArcMap 9.2, which was also used for visualisation of the routes.

During the interviews, data were collected about the presence or absence in the camp of each family member, as well as the number of pregnant women, births and deaths. As the communities did not always specifically record the birth dates of babies, all birth dates were approximated to be the middle date between two consecutive interviews.

For the livestock, participants were asked about camp herd structure, births, deaths, sales and purchases of animals, as well as animals taken in or entrusted to other pastoralists. The data on cattle were internally validated and cross-checked between the questionnaires.
Data were collected about cattle, goats, sheep and camels, divided by sex and age group (less than 1 year, 1 to 2 years and 2 years and older). For cattle, castrated males used for transportation of goods were also counted.
The age of first calving of cattle was assumed to be 3 years of age, which necessitated the inclusion of an adjusting factor to estimate the proportion of females above 3 years of age. Female cattle aged between 1 and 3 years were defined as heifers. Data were also collected about donkeys, horses (juvenile and adult age groups) and chickens. The information was recorded on paper questionnaires.

Data were double-entered using MicrosoftTM Access, compared with Epi InfoTM 3.5.1 Data Compare program and cleaned. Statistical analysis was done with Stata IC 10.1. ArcGIS 9.3 and Quantum GIS 1.8.0-Lisboa were used for geospatial analysis. A demographic cattle model, using cumulated data from the interviews, was generated with Vensim version 6.0. Parameters were optimised on the basis of goodness-of-fit by comparing the log likelihood of the current model with the log likelihood of a perfect model, with the number of parameters equal to the number of data points.
Data on female cows above 3 years of age were adjusted with an adjusting factor, since collected data included all cattle older than 2 years. Birth rates were calculated for each sex and net change rates for each sex and age group.

All members of the participant camps who reported illness had access to local health staff during a field visit at least once during the study period. On this occasion, free consultation and examination was provided to all camp members present, and any necessary medications were provided at low cost to the patients. In addition, an emergency service for medical and veterinary problems was established, which continues to date.
When a health emergency occurred, participants could telephone a local health worker in the central village, who would then travel to their camp. Using a cost sharing system, the participants paid for any medications needed, while the demographic surveillance project paid the transportation cost for the health personnel.

This method proved to be feasible for mobile phone surveillance for mobile pastoralist camps, providing usable, valid information on human and livestock population structures, pregnancy outcomes and herd dynamics, as well as migration patterns. The approach was low-cost and applicable with the existing local resources.
We concluded that demographic surveillance in mobile populations is feasible using mobile phones. We recommended that the small-scale system should be expanded into a full mobile demographic surveillance system, leading to improved planning and provision of human and animal health care.

Jean-Richard, V. et al. (2014). The Use of Mobile Phones for Demographic Surveillance of Mobile Pastoralists and their Animals in Chad. Proof of Principle, in: Global Health Action 7, 1-11.