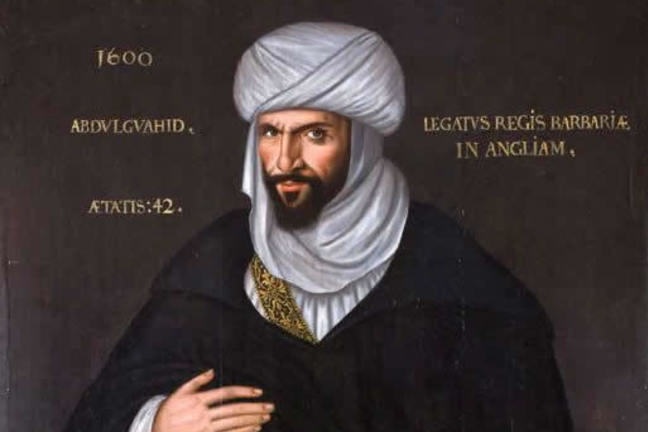 The Moorish Ambassador to Elizabeth I Abd el-Ouahed ben Messaoud.

Below are two extracts that present different views on the representation and meaning of Othello as a Moor. The first is taken from Jonathan Bate’s introduction to the RSC edition of Othello. The second is taken from Hugh Quarshie’s published essay on Othello entitled ‘Second thoughts on Othello’, which has already been referenced.

The following extract from Jonathan Bate’s introduction to Othello is reproduced with permission of Palgrave. (Othello, 2009, Macmillan Publishers Ltd):

‘To Shakespeare and his contemporaries, Turk, Arab and moor all represented the Islamic ‘other’, but they were not necessarily homogenized into a single image of ‘barbarianism’. Arabic culture was frequently associated with learning and civilisation, in contrast to the prevailing images of Turk and Saracen. A Barbar could be ‘brave’ rather than ‘barbarous’: George Peele’s Bbattle of Alcazar in Bbarbary, a play based on recent historical events, has both ‘a barbarous Moor, / The negro Muly Hamet’ and a ‘brave Barbarian Lord Muly Molocco’. A Moor could help you out in your war against the Turk – or, for that matter, the Spaniard. How you judged the Islamic ‘other’ depended not only on ideological stereotype but also on the particularities of diplomatic liaison and changing allegiance in a world of superpower rivalry. At the end of Alcazar, the evil Moor Muly Mahamet is defeated. The throne of Barbary goes to Abdelmelec’s virtuous brother, who is also called Muly Mahamet and who was a real historical figure. His Ambassador, Abd el-Oahed ben Messaoud, visited the Elizabethan court in 1600 in order to explore the possibility of forming an alliance to conquer Spain with a mixture of the English navy and African troops. Shakespeare’s company played at court that Christmas, so he may have seen the Barbarian delegation in the flesh. The surviving portrait of the Ambassador is perhaps the best image we have of what Shakespeare intended Othello to look like.

Peele’s play mingled historical matter with a more general sense of the barbarian, the other, the devilish – bad Muly Mahamet surrounds himself with the demonic and underworld associations. Audiences would have come to The Moor of Venice with the expectation of something similar, but witnessed a remarkable inversion whereby a sophisticated Venetian is the one who comes to be associated with the devil and damnable actions. So evil is Iago’s behaviour at the end of the play, Othello not only calls him a ‘demi-devil’ but half expects him to have the cloven foot of Lucifer.

Othello is initially referred to (by Roderigo and Iago) not by his name but as ‘him’ and then ‘his Moorship’ and then ‘the Moor’. Depriving someone of their name and referring to them solely in terms of their ethnic origin is a classic form of racism. In Shakespeare’s other Venetian play, something similar happens with ‘the Jew’. In early modern English, however, the primary usage of the term ‘Moor’ was as a religious, not a racial, identification: Moor meant ‘Mohamedan’, that is to say Muslim. The word was frequently used as a general term for ‘not one of us’, non-Christian. To the play’s original audience, the opposite of ‘the Moor’ would have been not ‘the white man’ but ‘the Christian’.’

The following extract is taken from Hugh Quarshie’s essay ‘Second thoughts on Othello’.

‘Interpretation inevitably brings revelation: when we interpret Shakespeare’s plays, we reveal something about ourselves. But we may also legitimately consider what Shakespeare revealed about himself when he adapted and interpreted the original story by Cinthio… one of the main effects of his changes is to emphasise the racial element in the play. In Shakespeare’s version Othello’s race and colour do not simply determine the nature of other characters’ reactions to him; they also go some way toward explaining his actions. In other words, Shakespeare suggests that Othello behaves as he does because he is black. And to suggest that a person’s behaviour is racially determined is, by definition racist .’

Further information about Cinthio’s Hecatommithi, Shakespeare’s source text, will be available in Week 3 of the course but if you would like to view the text you can find it in full online.

Having read the above you might want to consider:

In the discussion below you might want to ask yourselves: