Evidence of human-induced changes in rainfall across the world

Over the last 50 years or so, warming of our Earth’s surface has been observed over many parts of the world. This upward trend has widely been attributed to human influence.

Since a warmer atmosphere can hold more moisture, it is expected from a theoretical view that higher temperatures will be accompanied by wetter conditions. Rainfall over a region is influenced by local thermodynamic factors (for example a warmer ocean nearby) and atmospheric circulation at a far away location (for example El Niño Southern Oscillation in the tropical Pacific). An important question for climate science is to identify whether and how rainfall is changing in the present climate.

We demonstrate that rainfall has indeed increased over many parts of the world since the 1950s and that humans are responsible for these changes by analysing state-of-the-art observations and climate model simulations. The most marked trends are seen at northern high latitudes for all seasons and northern subtropical oceans in winter (see Figure 1). In other parts of the world, we show that our ability to detect changes and determine their cause is hampered by the sparseness of observations. This is especially the case in the tropics.

Our findings add weight to the evidence for man-made changes in rainfall and show that some regions of the world are affected more than others. Our comparison between simulated and observed rainfall has also highlighted gaps in the rainfall-observing network, which may be obscuring rainfall trends in some regions. As well as improving our understanding of both simulated and observed rainfall trends, our results contributed towards the evidence of climate change assessed by the United Nation’s fifth IPCC (Intergovernmental Panel on Climate Change) report in 2013. 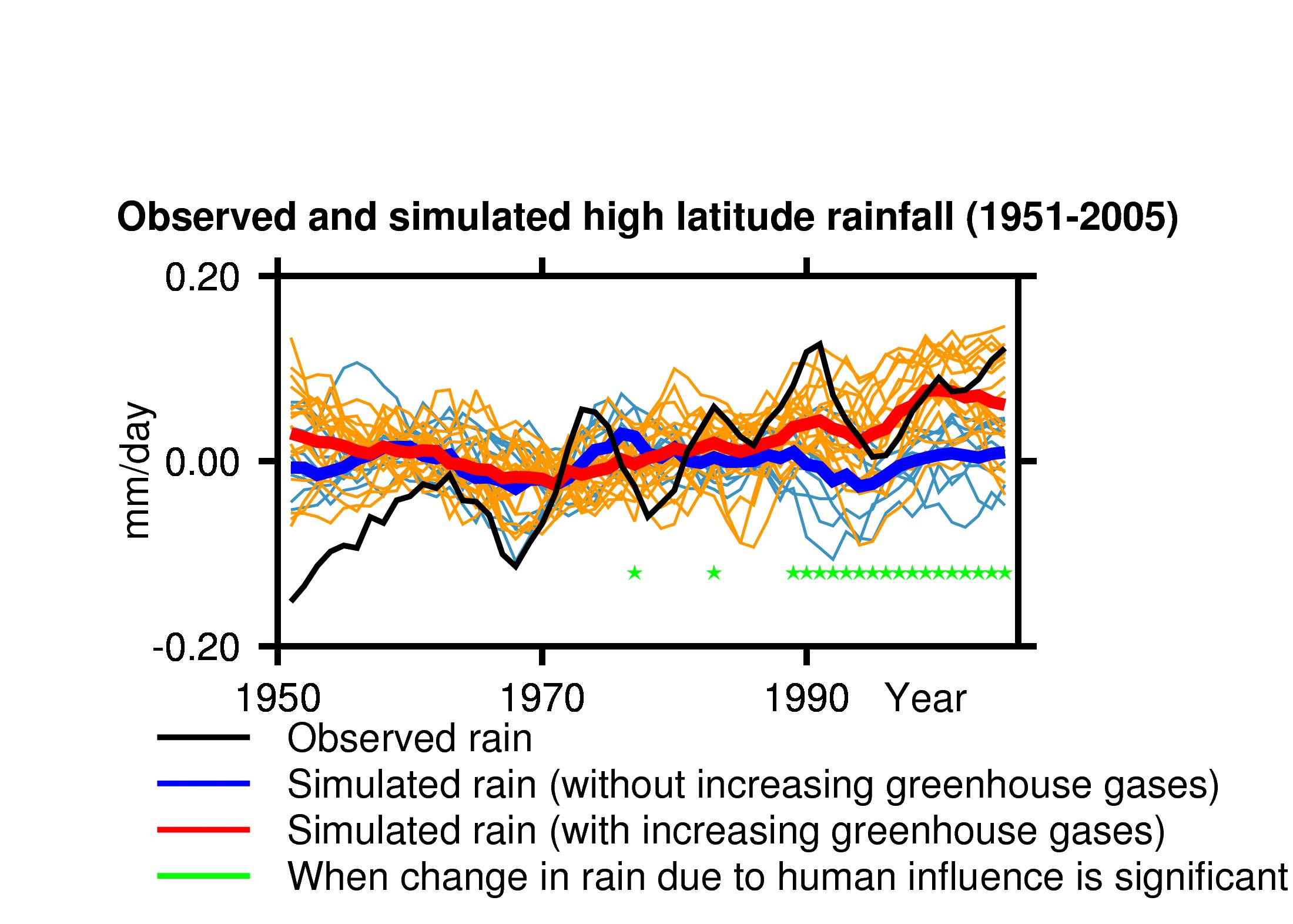 Figure 1. Year to year northern high latitude rainfall has gone up when climate models are driven by both natural factors and greenhouse gases (red) compared to when they are driven by natural factors only (blue). It has been possible to distinguish that the effect of human influence has been significant (green) since the 1990s. The measured rainfall is shown in black.

We used measurements of rainfall and computer simulations of climate carried out by state-of-the-art climate models from 17 leading climate centres around the world. The first step was to identify the trend caused by man-made factors, such as greenhouse gas emissions by comparing full model simulations, which included both man-made and natural factors, against simulations that included only natural factors. The next step was to investigate these trends in observations. Finally, we used the climate simulations to infer the effect that sparseness of rainfall measurements had on the observed trend. We did this by comparing the trends calculated when all points were included, with those calculated only for points at which there were observed data.

So what do we conclude from this study?

Significant human influence on rainfall is emerging in the latest generation of climate models and observations over many parts of the world. We need better coverage of ground-based and satellite rainfall measurements over regions where sparse observational coverage hinders the detection of change from natural variations (either internally generated within the climate or externally forced by explosive volcanic eruptions and changes in the brightness of the sun) and man-made factors such as greenhouse gases or atmospheric fine pollutants.