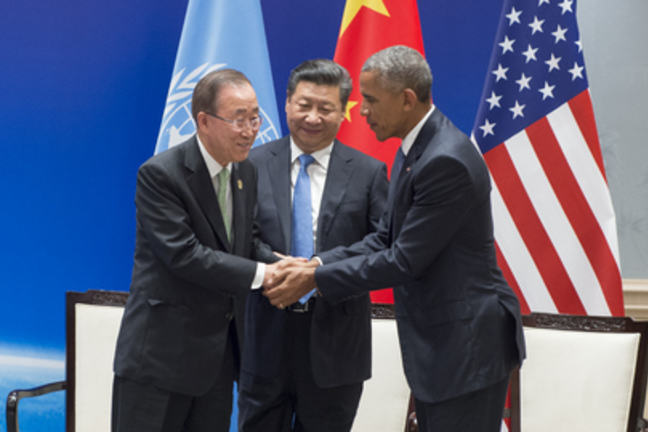 At COP 21 in Paris, Parties to the UNFCCC reached a landmark agreement to combat climate change and to accelerate and intensify the actions and investments needed for a sustainable low carbon future. The Paris Agreement brings for the first time all nations into taking actions to combat climate change and adapt to its effect, with enhanced support to assist developing countries.

Status of the Agreement

On 5 October 2016, 79 Parties of the 197 Parties to the Convention had ratifies the Paris Agreement. The Agreement came into force on 4 November 2016, thirty days after the date on which at least 55 Parties to the Conventions accounting in total for at least an estimated 55% of the total global greenhouse gas emissions had ratified the Agreement. You can find more information about the status of the ratifications on the UNFCCC website.

Essential elements of the Agreement

The central aims of the Agreement are:

• to strengthen the global response to the threat of climate change by keeping a global temperature rise this century well below 2°C above pre-industrial levels and to pursue efforts to limit the temperature increase even further to 1.5°C.

• to strengthen the ability of countries to deal with the impacts of climate change.

To reach these aims, the following mechanisms will be put in place:

The Paris Agreement requires all Parties to put forward their best efforts through “nationally determined contributions” (NDCs) – national climate action plans - and to strengthen these efforts in the years ahead. This includes requirements that all Parties report regularly on their emissions and on their implementation efforts. There will also be a global stocktake every five years to assess the collective progress towards achieving the purpose of the agreement and to inform further individual actions by Parties.

The Intended Nationally Determined Contributions represent a major step forward in efforts to address climate change and presents some challenges and opportunities relating to keeping temperature rise below 2°C. 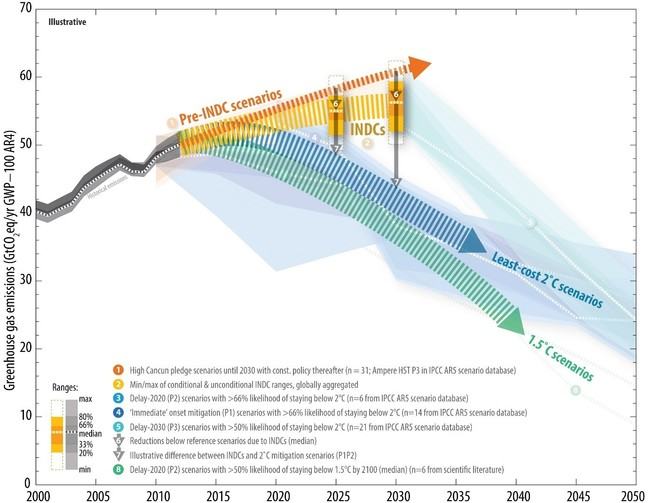 The estimated aggregate annual global emission levels resulting from the implementation of the INDCs do not fall within the scope of least - cost 2°C scenarios by 2025 and 2030 (see Figure 2). However, by lowering emissions below pre-INDC trajectories, the INDCs contribute to lowering the expected temperature levels until 2100 and beyond. Such temperature levels strongly depend on assumptions of socioeconomic drivers, technology development and actions undertaken by Parties beyond the time frames stated in their INDCs (eg beyond 2025 and 2030).