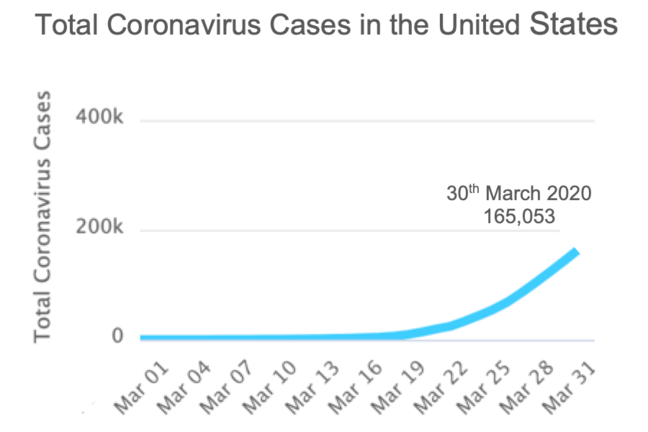 The graph above is an example of a time series. It is a series of data points in March 2020 showing the total number of people in the USA infected on each day.

Time series data for most countries in the world can be found on the website https://www.worldometers.info/coronavirus/country/us/. The data for the USA during March are tabulated below.

In fact the observed number for 31st March was 189,967 so our estimate is 4,182 infected people too low, or an error of about 2%. You might think that is quite good, but it’s only an estimate for the next day. What about making an estimate a week ahead, say for the 6th April. Before reading on, make you own estimate and write it down.

Modelling depends on making assumptions about the system being modelled. Here I am making the assumption that the future trajectory of the curve will be similar to the past. I have interpreted this as

which gave an error of about 2%. for + 1 day ahead. I propose to modify this model for + 7 days ahead to the following:

This time the modelling assumption is that there is an exponential relationship between the number of days and the number of deaths. I found a model that fitted the pink data very well. It is estimated deaths = 10 (number of days - 1) x 0.104 but the mathematical details don’t matter here.

This is plotted in blue in Figure 8.1(b). As you can see the blue curve is a very good approximation to the pink curve and fits the data very well. Do you agree?

Figure 8.2 Divergence between the exponential model and the data

As Figure 8.2 shows the blue exponential curve keep rising very fast, but the data have stopped having this exponential relationship and straightened out to a more linear relationship.

From this it must be concluded that the exponential extrapolation model is not appropriate for these data - I was using a model with inappropriate assumptions.

If you never worked with models before did this step enable you to understand them better? Do you agree that models and modelling are essential for making policy, but care is required? Do the examples illustrate how making incorrect assumptions can lead to very poor forecasts? Do you have your own ideas on how the COVID-19 epidemic could be modelled?