This content is taken from the University of Basel & Swiss Academies of Arts and Sciences 's online course, Partnering for Change: Link Research to Societal Challenges. Join the course to learn more.
View course
3.3

Societal challenges involve a multitude of actors with different roles, interests, and power. Understanding these constellations is an important basis for transdisciplinary research (TDR) projects. It is also a prerequisite to clarify whom to involve. For this task, we propose an actor analysis to gain an overview on the actor system in the field of interest and to get a clearer picture of whom to involve in a specific TDR project.

In the following, we introduce a sequence of steps providing an overview on potentially relevant actors for a TDR project. The sequence is based on Cash et al. 1; as shortened and adapted by Tobias Buser.

Start with the (broad) focus or overarching goal of the project and identify the relevant geographical scales (ie local, regional, and global).

Find actors in the system of interest. Answer the questions below with the aim of generating a (usually long) list of all potentially relevant actors. Regarding the project’s topic and overarching goals:

Note: Cross-tables with the actors on one axis and the categories on the other axis are a convenient way for an overview.

Power and relations. Analyse potential stakeholders’ interest and power regarding the project.

Classify the actors based on your current knowledge into one of the four quadrants – note that power can be constituted by several factors, eg power to take decisions, economic power, social capital, knowledge, and others. 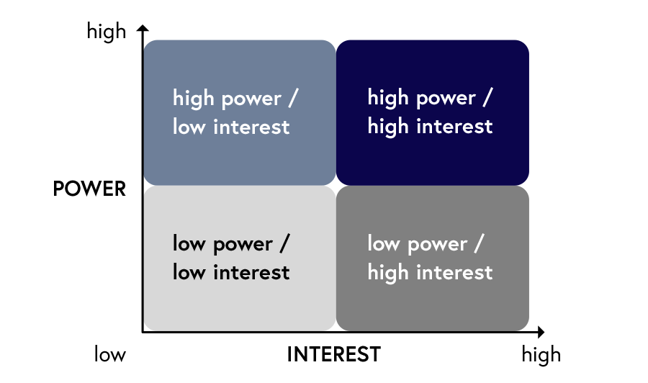 The position in the quadrants indicates the degree of involvement: 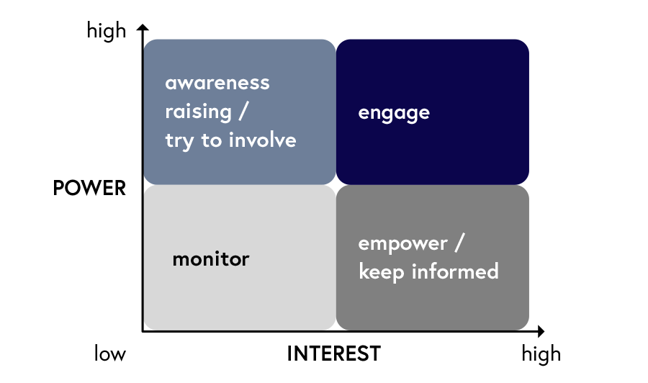 Low power/low interest: These actors are currently of little importance for the project. However, keep in mind that interest and/or power of an actor can change over time.

Low power/high interest: While these actors have little power, they may be important stakeholders for your project. Often they are directly affected by issues the project tackles, eg local farmers or migrants. Note that this is a big difference to how the power/interest grid is interpreted in corporate contexts.

High power/low interest: This group is the most difficult to deal with. These are often ‘gate-keepers’ that can be decisive about a project’s success, but are usually very difficult to get in collaboration with. Sometimes, awareness-raising can make them more interested. Otherwise, strategies are needed that require little engagement from these actors, but keep them satisfied.

High power/high interest: These are the actors to clearly engage with in the project.

(2) Mapping of stakeholder relations: Especially in complex, contested systems, it is also important to have an idea on the relationships between the different actors. Mapping actor relations can already be a result on its own, but mainly it helps to design co-production processes in a more effective way. For example: In actor systems showing many conflictive relationships (as in the example shown below), it is recommended to first work with several sub-groups. 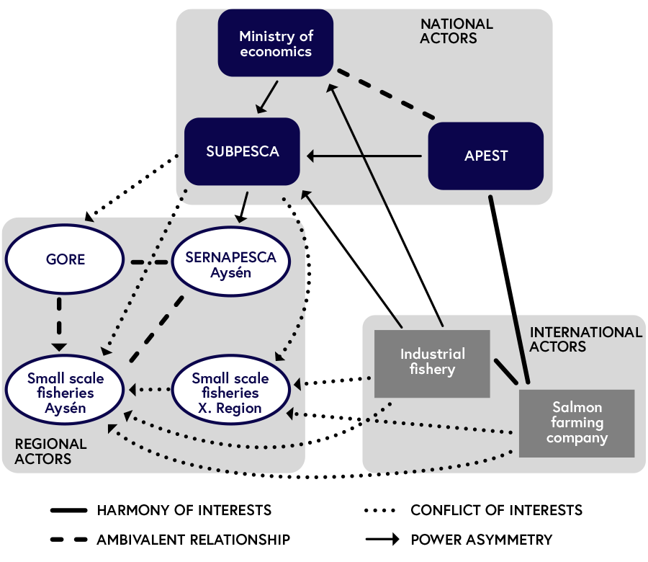 Example of a stakeholder mapping: small scale fisheries in southern Chile. (Based on Schneider & Buser, 2003)