0:00Skip to 0 minutes and 0 seconds [POP MUSIC] My name is Alberto Rosemini, Co-founder with Rebecca Stevenson, my wife, of Signorelli, which is an artisan bakery and pâtisserie within the Olympic Park. I’m an Italian. And in every town that you live in Italy, the pedestrian area has always been the centre, and is where people hang out. So when I came here, it was pretty obvious that sooner or later it would become a great destination for all the people living around here. I’ve seen these sorts of schemes sort of developed throughout the ’90s and the Noughties. And they never really quite worked. There was something that stayed quite sterile about them. I think on this, they’ve really learned from it.

0:53Skip to 0 minutes and 53 seconds And I think there’s been a real push towards getting people active, and getting people walking and on bikes. And people actually talk to each other in the streets. People know each other. So it definitely has delivered far more than I ever anticipated in such a short time. It would be very nice for us to expand. Because right now we have decent growth, which I could not complain. And we would like to dedicate the shop here in this village to our bakery station, and move all the patisserie at the IQL, which would be a fantastic experience for us.

1:27Skip to 1 minute and 27 seconds Our pâtissier is already over the moon, knowing that she will have a shop all for herself, so we won’t have to fight for our space. One of my favourite things, obviously, is that there will be no transport between any of the shops. There will be maybe one person on a bike hanging around in the morning with fresh loaves or a croissant, which would make it even more magic. It will be a great project for people to look at in 5, 10 years time, and to see how it compares to other places that have been much more led by market forces, rather than a specific tenant mix and a real thought process.

2:02Skip to 2 minutes and 2 seconds I mean, it’s not put something on the market and see who pays the most money. They really are thinking about how people are going to work together, how they’re going to bounce off each other, how that looks overall on their financial appraisal. And I really think it’s an exciting time. And I think in 10 years’ time, London will be far ahead of any other European city, even New York, because of the fact that we’ve got landlords who are curating areas like little art galleries. [POP MUSIC]

The IQL sits in an area in which existing residents and businesses are affected by the development. These stakeholders may be supportive or opposed to the scheme.

Watch Alberto Singorelli and Rebecca Stevenson, owners of the cafe Signorelli explain what the IQL development means for them and their business. This video provides a largely supportive view of a property redevelopment, however not all responses are likely to be as positive.

Take a look at the diagram below which includes examples of a range of stakeholders who could hold very different views about a large property development. Do you think any stakeholders are missing? 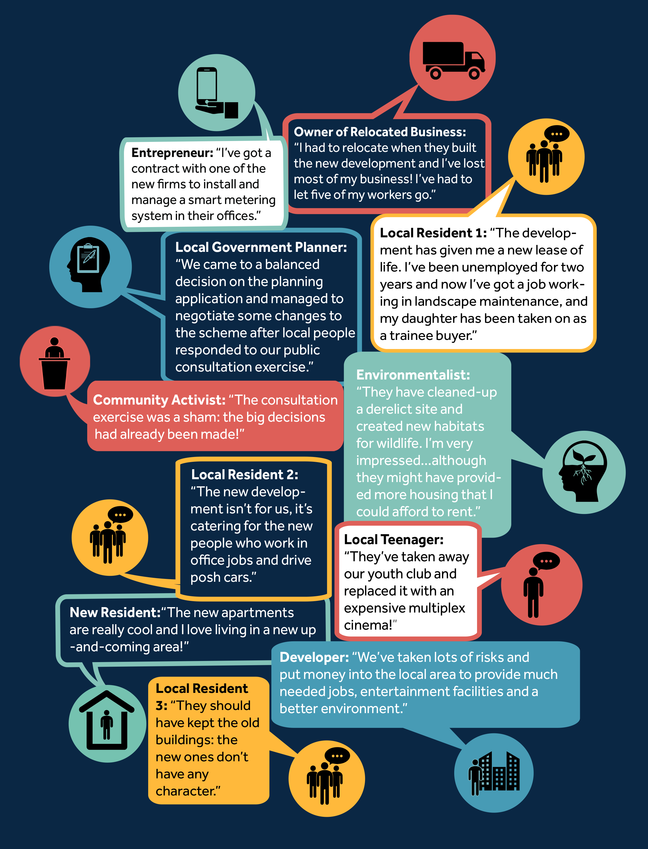 A diagram showing examples of conflicting voices on a property development. © University of Reading.

In the next Step you will examine a critique which shows there can be losers as well as winners as a result of property-led regeneration. Don’t forget to ‘mark this Step as complete’ before you move on.

Pathways to Property: What is Real Estate?