0:13Skip to 0 minutes and 13 secondsAt the Royal College of Anaesthetists, we've been thinking about how to make surgical care more efficient and effective by integrating the care patients receive before, during, and after surgery. Around 10 million patients undergo surgery in the NHS every year. And we believe there's huge potential to make the system work better, particularly for the group of 250,000 patients at high risk of complications, who account for more than four out of every five deaths after surgery. Here's an example. Meet Doug. He's just been diagnosed with bowel cancer. And his surgeon has told him he needs an operation to remove the tumour.

0:51Skip to 0 minutes and 51 secondsDoug's GP has also been treating him for a lung disease caused by his smoking and is aware of some problems with his kidney function, but this is not making Doug feel unwell. In the current system, Doug's anaesthetist may not receive this information, until the actual day of his operation. Despite the lung and kidney issues, it's thought that surgery is Doug's best option. Like the majority of operations, it's a technical success, and the tumour is removed. But a few days after surgery, Doug's weakened lung function deteriorates, and he develops pneumonia. So Doug is admitted to a critical care unit for more intensive treatment.

1:28Skip to 1 minute and 28 secondsHe ends up staying in hospital five days longer than originally planned before he's fit enough to go home with his family. As well as the pneumonia, Doug's kidney function gets worse. But because he doesn't show any symptoms, it goes unchecked. And in the months which follow his operation, Doug gradually develops chronic kidney disease. So despite successful surgery for cancer, Doug is actually less healthy than before and eventually requires kidney dialysis treatment on the NHS. When we zoom out and look at this pathway and see Doug's repeat visits to hospital, we can see it's very complicated and uses lots of resources. Let's compare that to another pathway for Doug, where we take a simpler, more integrated approach.

2:47Skip to 2 minutes and 47 secondsThe team also alert a kidney physician to monitor Doug's kidneys before and after surgery. Now after Doug goes in for his successful surgery, he is admitted to the critical care unit for a couple of days straight after the operation. So he gets extra care from the nurses and doctors, as well as physiotherapy. All of this helps him avoid pneumonia and he gets to go home quicker. The perioperative physician, the kidney physician, and Doug's GP all stay in touch, monitoring Doug's condition and adjusting his medicine so he avoids a return to hospital and doesn't need dialysis. It's clear that this pathway is better for Doug and frees up hospital beds, meaning fewer operations are cancelled for other patients.

3:31Skip to 3 minutes and 31 secondsCurrently over 16 billion pounds is spent every year on surgery in the NHS. And we believe perioperative medicine will help NHS commissioners and providers achieve even more with this money. That might seem ambitious, but the good news is that all the skills and personnel are already available within the NHS. We simply propose organising them into perioperative medicine teams to assess and treat patients before surgery, to coordinate their care in hospital, and to review any unresolved problems after they go home. Each patient would remain under the care of the perioperative medicine team throughout their entire journey. This would give GPs and surgeons a point of contact, centred around the patient, providing better communication.

4:16Skip to 4 minutes and 16 secondsMost patients are at low risk of complications and won't need a major change to their pathway of care. But for the growing number of high risk patients, we can make small changes to vastly improve their treatment. This thinking is being put into practise already. Four out of five NHS hospitals already have some form of anaesthetic assessment clinic. Exercise testing before surgery is available in two out of five NHS hospitals. And 92 hospitals are taking part in a major clinical trial to develop perioperative medicine for patients who need emergency abdominal surgery. It's time to work together to make perioperative medicine a reality, setting up the NHS to provide efficient high quality care for every patient who needs major surgery.

5:03Skip to 5 minutes and 3 secondsThanks for watching.

The above video is published with the permission of the Royal College of Anaesthetists (RCoA) and is taken from their perioperative homepage.

In 2015 the RCOA published this video along with a vision document outlining a plan for perioperative medicine - the full vision document can be found on the Royal College website.

Around 10 million patients have surgery every year on the NHS. The majority of patients are well served by existing pathways, but there is evidence that the needs of the high-risk surgical patient are not being met. Only 15% of those needing surgery are high risk patients yet they account for around 80% of deaths after surgery.

With the vast number of patients involved, even a small change in the rate of avoidable harm could result in a reduction of many preventable complications and deaths.

The aim of perioperative medicine is to deliver the best possible care for patients before, during and after major surgery. It should use existing skills and expertise already present within hospitals to provide an improved level of care in the perioperative period.

The perioperative team should be a multidisciplinary team lead by doctors from multiple specialties. The integrated pathway is outlined in the image below. Importantly this team would be the single point of contact for co-ordinating the care of these complex patients. 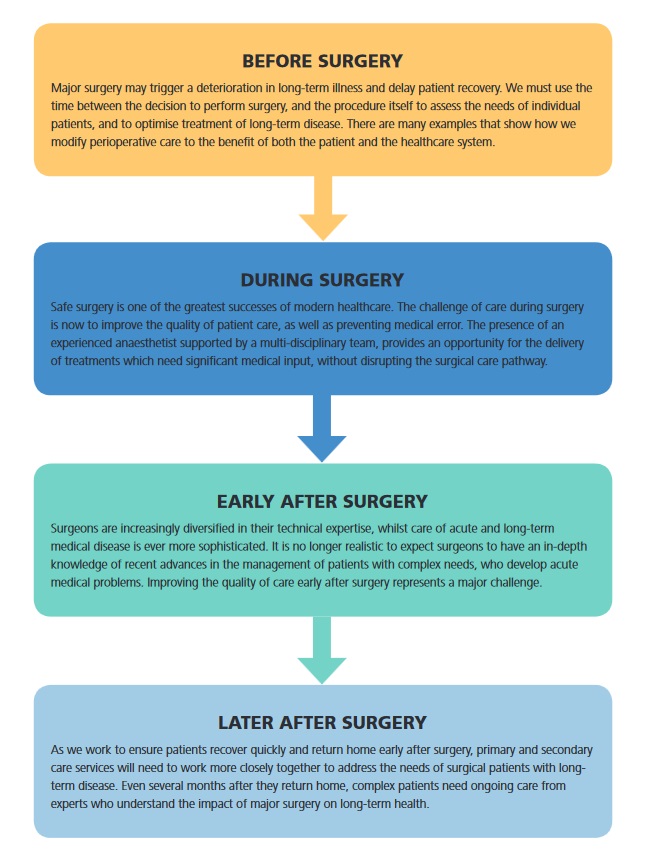 Each of these areas is expanded upon in the RCOA vision document and it is highly recommended that you take the time (20 to 30 minutes) to read this document.

There are already some examples of successful perioperative pathways in place such as the enhanced recovery programme which will be examined fully in Week 3 of the course. Other successful models and proposals will be discussed in the next step.

What models and examples of perioperative pathways have you seen in your own place of work? In your experience, what have been the advantages and disadvantages of these pathways?

© Material shared with permission from the Royal College of Anaesthetists