This content is taken from the Coventry University's online course, Perspectives on Entrepreneurship. Join the course to learn more.
View course
2.3

Cultural norms, beliefs, values and assumptions about behaviour are generally examined from a national level.

The most widely used dimensions of national culture are those developed by Geert Hofstede in 1981. Although conducted more than 40 years ago, it remains one of the most authoritative studies on national culture (Burns 2016). However, we are not just interested in culture but in entrepreneurship in different cultures.

For the last 20 years, the Global Entrepreneurship Monitor (GEM) studies have been profiling countries on their entrepreneurial activity and reporting on the environment for entrepreneurship, on societal attitudes and self-perceptions of being an entrepreneur. GEM’s research has produced 20 years of data on rates of entrepreneurship across multiple phases of the process; profiles of entrepreneurs – including demographics, motivations, and ambitions – as well as characteristics of their businesses, such as levels of innovativeness and industry participation (GEM Global Report 2018).

GEM conducted its inaugural survey of entrepreneurship in 10 developed economies in 1999. Since then, GEM has surveyed over 2.9 million adults in 112 economies. GEM is unique because it represents a primary source of data, generated through an Adult Population Survey of at least 2,000 randomly selected adults (18-64 years of age). In the latest 2018–2019 report, it surveyed the adult population across 49 economies.

The purpose for focusing on GEM to discuss entrepreneurship in different cultures is because of GEM’s conceptual framework, which illustrates the relationship of entrepreneurship with its environment. The social, cultural, political and economic context is seen as directly influencing entrepreneurship, as well as indirectly through societal values and individual attributes. These influences can be positive or negative. This is represented in the diagram below. 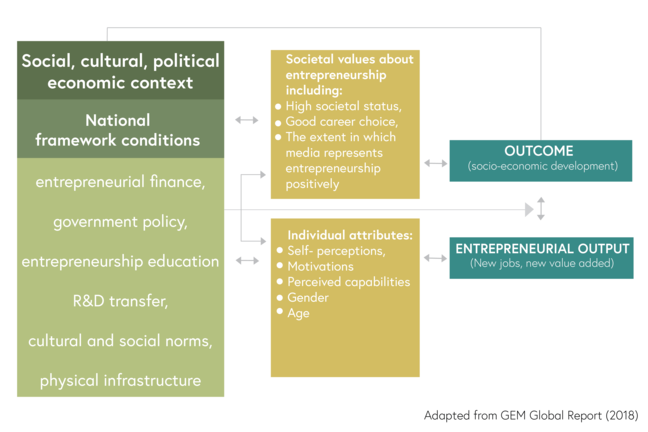 Using the GEM database, investigate how entrepreneurship is perceived in a country other than your own, making note of the societal values as well as the socio-cultural and politico-economic context.