0:01Skip to 0 minutes and 1 secondSo you've got your first Raspberry Pi, you lucky thing. But now what? Well, fear not adventurers. I'm here to explain all. The Raspberry Pi is a tiny computer that has the ability to do loads of wonderful things. So let's take a closer look.

0:24Skip to 0 minutes and 24 secondsYou'll probably want to use a mouse or a keyboard. That's what these USB ports are for. Oh-ho! There's also an HDMI port for a display. You can use a monitor or even your family TV.

0:41Skip to 0 minutes and 41 secondsAnd this is an ethernet port so you can connect to the internet. Your Raspberry Pi Even has a connector for a special camera module.

0:54Skip to 0 minutes and 54 secondsIt can hook up to lots of other devices if you use a USB hub too.

1:04Skip to 1 minute and 4 secondsSo now that we've had a look around the Raspberry Pi, let's get set up.

1:11Skip to 1 minute and 11 secondsFirst, you're going to need a screen. This can be connected with an HDMI or analogue cable depending on the kind of display you're using. Next, a USB mouse and keyboard, a micro USB power supply like one you'd use to charge your mobile phone, and an ethernet cable to get online. The operating system runs from a micro SD card just like the one in your digital camera. You can download your operating system for free from the Raspberry Pi website. If you want to get started even quicker, you can buy a NOOBS card which comes preloaded with a choice of operating system for everyone from beginners to experts.

1:54Skip to 1 minute and 54 seconds[CRASHING SOUND] [CAT MEOWS] And there you have it, your shiny new Raspberry Pi is ready for you to boot up and start doing fantastic things. Build an arcade machine, make a robot, create music, fly a drone, or send your Pi into space.

2:22Skip to 2 minutes and 22 secondsSo what are you waiting for? Go on, make your Raspberry Pi do something truly amazing. [LAUGHTER] Ooh!

It may not look much like the computers you are used to, but this is because we are accustomed to seeing a computer in a case, with a monitor, keyboard and mouse attached.

The Raspberry Pi comes without any of these peripheral input, output and storage devices. It is known as a single board computer, and the fact that it comes without any additional peripherals, and uses hardware components more usually found in mobile phones and tablets, means it can be sold for as little as $35. 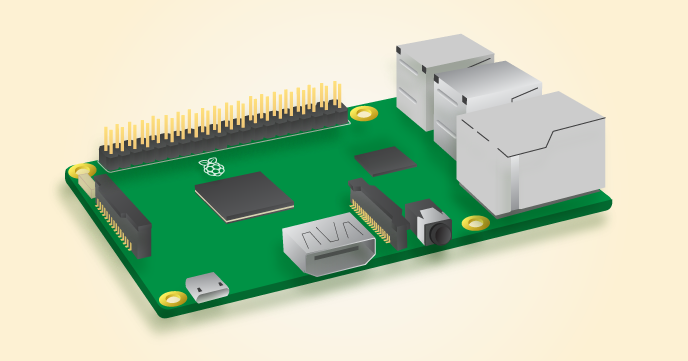 The Raspberry Pi has several ports that enable you to connect a variety of devices.

Input devices let you send data to a computer. The two most common input devices are a keyboard and a mouse. You can plug a USB keyboard and mouse into two of the four USB ports on the Raspberry Pi.

Output devices let the computer send data to a user. Two of the most common output devices are a monitor and speakers. You can connect an HDMI monitor or television to the Raspberry Pi using the single HDMI port. If you don’t have an HDMI monitor, then you’ll need to use an adaptor. You can connect speakers or headphones to the Raspberry Pi using the 3.5mm headphone port.

The last thing you’ll need to do is provide your Raspberry Pi with power. For this, we use a micro-USB power supply.

The Raspberry Pi at first glance appears quite different to computers that most of use are familiar with. Use the comments below to respond to these questions: