This content is taken from the University of Wollongong's online course, The Power of Podcasting for Storytelling. Join the course to learn more.
View course
2.3

0:06Skip to 0 minutes and 6 secondsSo one of the texts that we studied when I was doing the course at the University of Wollongong, was Phoebe's Fall which you actually had a hand in. How did that project come about and what is Phoebe's Fall? Phoebe's Fall is a narrative podcast which investigates the death of a young woman, Phoebe Handsjuk. She was 24 and she was found dead at the bottom of a garbage chute in this luxury apartment building in Melbourne. And it was a terrible tragedy, obviously. But the question was, was it an accident, was it murder, or was it suicide? And that was the question that intrigued Richard Baker who's one of the hosts of Phoebe's Fall.

0:51Skip to 0 minutes and 51 secondsHe's a well-known investigative journalist at The Age newspaper which is one of Australia's most famous newspapers. And he's a terrific investigative journalist. And he had been covering the trial, the court case rather, the inquest into her death, and he knew there were a lot of unanswered questions. And he had made good contact with members of her family. But he thought, what's the point? I can only get 4,000 words to write about this in the newspaper max and I can't possibly cover all the complexities of this story. And then, lo and behold, he was listening to Serial, the podcast. And he thought, oh, I know. Eureka, I'll just make a podcast. Just make a podcast.

1:30Skip to 1 minute and 30 secondsNot realising that it would take the next six months of his life and a team of six of us to pull it all together. But he jumped in and he started to assemble a team around him. And they got to the point where they had a lot of material but they didn't know what to do with it. Because they suddenly realised, oh, we're newspaper people. Or they had video people but we're not really audio people. So they brought in myself to work as a consultant producer and basically help with narrative structure. And there was another audio person, Julie Posetti, who was very strong on voice production.

2:07Skip to 2 minutes and 7 secondsSo then we had the team and we started to see all those interviews that were there with her father, her mother, Phoebe's brother. We had interviews with detectives, we had interviews-- We couldn't find Phoebe's then boyfriend. He refused to participate. In fact, he sent us a lawyer's letter pretty well saying that he wanted nothing to do with it and to be very wary of what we said. And we also got fabulous people like the cleaner of Phoebe's apartment who turned out to be remarkably observant and had great psychological insight which actually really astonished all of us. So with all of that stuff sitting there, all these interviews, it still wasn't working as an audio format.

2:56Skip to 2 minutes and 56 secondsSo I suggested-- One day we all had a meeting and I suggested a thematic approach. So instead of looking at it chronologically, this happened then this and this. OK, let's break it down. Who is Phoebe? That's number one. And then, the chute. She was actually found having passed through 12 floors of this mechanical compactor. It's really grisly and it's hard to listen to but it was crucial in order to understand the central question that we were asking. What happened to her? So I said, let's make the chute an episode. Let's make the chute an actual character in this. And the guys looked at me as if I was insane. What? How can a garbage chute be a character?

3:38Skip to 3 minutes and 38 secondsAnd I could almost feel the eyes rolling. But in the end, that ended up being one of their favourite episodes because we were able to bring in people, recreate people going through chutes, talk to men who'd been compacting rubbish for many years who could say, well no, it's very odd that she went through in this particular manner blah blah blah. Then we moved on to looking at aspects of the police investigation, aspects of the funeral and the family responses, and then the coronial inquiry. So then once you had your little episodes mapped out, everything could be neatly put under those and you just had to deal with a much lesser volume of material. And that's how we proceeded.

4:21Skip to 4 minutes and 21 secondsAnd it worked really well. As a podcast, it was very popular, especially among young women of the same age as Phoebe, which a lot of you guys as students would have been. And because it had other elements at play. She was living with a much older boyfriend. He was quite a controlling figure and she had been trying to leave him. So that was all playing out in the background and we needed to look at aspects of the relationship as well. And those sort of personal elements really work well for podcast.

Phoebe’s Fall investigated the story of how 24-year-old Phoebe Handsjuk was found dead at the bottom of a garbage chute in a luxury Melbourne apartment block in 2010. The coroner declared it was a tragic accident. The family wanted an open verdict. The police investigation was strangely botched. So we set out to find out more about what really happened to Phoebe: accident, suicide, or murder? The six-part series dropped in 2016 and had about 1.5 million listeners. It triggered questions in the Victorian state parliament which led to a change in the Coroner’s Act. It won three national and one international award. 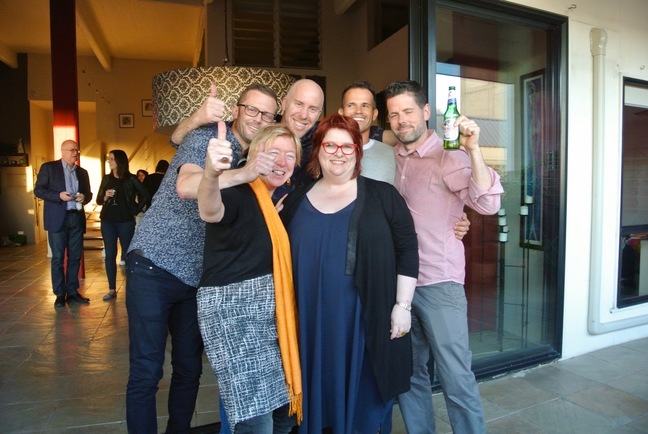 The production team for Phoebe’s Fall at the wrap party: