0:05Skip to 0 minutes and 5 seconds SIMON KEAY: The Roman Empire in the second century AD, in essence, represented the fulfilment of the political and the cultural developments that had happened across the Roman Empire in the course of the preceding 100 years. It was, essentially, an empire of cities, cities that had been established from as far back as the late first century BC in the west, and cities that had existed since the Hellenistic period in the east. And all of these were bound by political ties to the city of Rome. It’s a period in which we also see the achievement of a high degree of cultural convergence. And that is not to say, that everybody was the same culturally across the Roman Empire.

0:54Skip to 0 minutes and 54 seconds Because, of course, there were very substantial, deep, cultural traditions across the Roman Empire that had existed previously. But these are incorporated and changed, to some degree, with a veneer of Roman culture, Roman ideas about architecture, art, and the practice of religion and so on, that gave rise to very distinctive regional flavours across the Roman Empire. In terms of historical events during the second century AD, it is not a period marked by many historical events. However, we do know, for example, that in the later second century AD there were a series of wars along the Rhine and Danube frontiers, the so-called Marcomannic Wars, in which the Roman Emperor, Marcus Aurelius, had sustained conflicts against the Germanic peoples further east.

1:56Skip to 1 minute and 56 seconds And we also know about an event recorded by some of the ancient sources, which is known today as the Antonine Plague. And seems to have been smallpox or something like that, which spread across the Roman Empire from the east in a period roughly between AD 165 and 180. And we know that at its high point created a very large number of casualties, as many as 2,000 a day, supposedly, in the city of Rome itself. And undoubtedly, this must have had a major impact upon trade and upon the lives of people, certainly living around the Mediterranean basin. But that, I hope, gives you an idea of the nature of the Roman Empire in the second century AD.

This week I have welcomed you to an “empire of cities”, many of which, in the context of the Mediterranean were great ports, with Portus and nearby Ostia being of key importance. By this time, the Roman Empire had achieved an unprecedented degree of political cohesion, and was ruled by a succession of emperors of provincial origin, a development that was symptomatic of a high degree of social integration.

Indeed, you might want to find out more about the Emperor Septimius Severus, who was of provincial origin and derived from the port city of Leptis Magna and who had a major impact on Portus. While the many temples, theatres, houses and artistic achievements that are known from across the Empire would seem to speak to us of cultural integration as well, it is important to remember that underlying regional traditions, particularly between the Hellenistic traditions of the Greek-speaking east and rather more variegated practices in north Africa and the Latin-speaking west, remind us of a more complex reality. Notwithstanding this, as I mentioned in the video it is a period that also witnesses disturbances on the frontiers, such as the wars between Rome and the Marcomannic people on the German frontier in the 180’s AD. 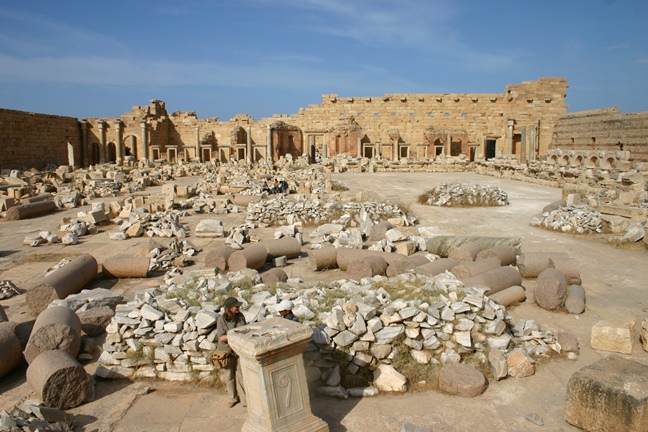 A view across the Severan forum at Leptis Magna in Tripolitania (Libya), built by the Emperor Septimius Severus, who was also responsible for a major programme of building at Portus. Olive oil from Tripolitania was imported to Portus on a large scale in the later 2nd to early 3rd c AD - Simon Keay © University of Southampton

Portus, therefore, was the maritime focus of a Mediterranean sea that had been politically unified for an unprecedentedly long time. Piracy was absent and pan-Mediterranean commerce was flourishing on the back of economic developments that had been ongoing in the provinces bordering the Mediterranean for c.150 years. The large volume flow of goods, foodstuffs and people across the seas of the Mediterranean also had its downsides, such as the Antonine Plague which spread into the west from the east in the 160’s AD and is supposed to have decimated the population of Rome and other key cities.

We’ll go on to learn more about Septimius Severus’ and others’ impact on Portus in the next video.