0:05Skip to 0 minutes and 5 seconds SIMON KEAY: Coring’s been very, very useful at Portus. Before we started the Portus Project, my colleague, Jean-Phillipe Goiran, at the University of Lyon, and a range of Italian colleagues, have been conducting programmes of coring, primarily in the great Claudian basin. And, the coring there has told us a lot about the depth of the sediments within the harbour basin, which tell us, I think, quite a lot about how the harbour basin was used and how it gradually silted up. In the context of the Portus Project, coring, done again by Jean-Philippe Goiran and Ferreol Salomon, has been incredibly useful in focusing upon very specific aspects of the area that we’re working in, looking in particular at canals and the excavation area itself.

0:58Skip to 0 minutes and 58 seconds In terms of the canals, the coring has enabled us to understand the depth of these canals, the range of sediments within them, and giving us an idea as to whether they were used– they were with fresh water or seawater. And, again, this will help us understand a little bit which kinds of ships might have used them, and what kind of connections there may have been between these canals, the Claudian basin, and the Trajanic basin. However, we’ve also used cores to try and understand the depth of deposits underneath the excavation so we can in a sense place the establishment of the buildings that we are excavating in the overall development of the harbour sequence at Portus.

Analyses of sedimentary deposits and micro-fauna from deep cores drilled into the Claudian basin, quays and canals have taught us much about the use of water-spaces at Portus. I mentioned my colleagues Jean-Philippe Goiran and Ferréol Salomon from the University of Lyon. Their work in the basins, canals and underneath the buildings have given us lots of new information, like the depth of the canals and hence what kinds of vessels could have used them.

This also allows computer simulations to be produced of the flow of water, complemented by simulations of the prevailing winds and so on. Their cores, and those of Italian colleagues, have also explored the sequence of sedimentary deposits in the Claudian basin, telling us a lot about how it gradually silted up, and also providing clues about the broader environment surrounding Portus. 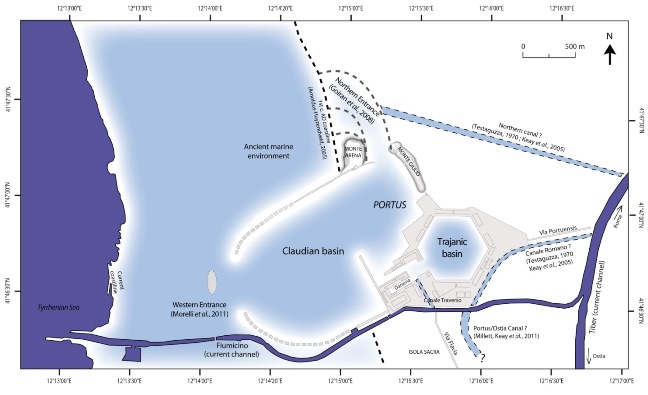 Interpretation of the maritime environment at Portus, in part based on coring evidence gathered by the Portus Project - Ferréol Salomon © University of Southampton

By combining this kind of information with work by colleagues such as Giulia Boetto, a colleague of ours from the University of Aix-Marseille and one of the leading international specialists in Roman ships, we are starting to put together a picture of how the various canals, the sea and the Tiber connected and worked as an integrated transport system. Indeed, most recently we have begun working with modern experts in shipping to see if we can understand the logistics of this better, and perhaps provide some new insights that might help modern maritime trade.