0:05Skip to 0 minutes and 5 seconds SIMON KEAY: The third and the fourth centuries represent a major change in the nature of the Roman Empire and conveniently one can– it breaks down into two steps. The third century essentially sees a major challenge to the system, the way the empire was in the second century AD, so we see a series of crises being played out across the Roman Empire. First of all, we see a crisis of authority as the armies put forward a whole series of Emperors claiming imperial authority. A process which led to a number of civil wars, and eventually led to the emergence of separatists kingdoms across the Roman empire. One thinks, for example of the Gallic empire which incorporated Britain, which incorporated Spain and Gaul.

1:06Skip to 1 minute and 6 seconds One thinks of the Palmyrene Empire in the East which incorporated Egypt, Syria, and regions like that. In addition to that, we also see invasions by Germanic tribesmen coming across the Rhine frontier and spilling into Gaul. And we therefore see an attempt by Rome to counter this, which only really bore fruit in the late third century AD, largely the work of the Emperor Aurelian. And, as a consequence of that, we see the walling of many provincial towns, ostensibly to protect them from future instability, and indeed the walling of the city of Rome itself. Side-by-side with that, we see a major economic crisis. We see the Roman system of coinage rapidly spinning out of control with high inflation and consequent economic changes.

2:10Skip to 2 minutes and 10 seconds After the crisis of the third century, the fourth century sees a response by the Roman Empire. First of all, there is increasing regionalisation of political and administrative control in the Empire. We see the number of provinces which had numbered in the region of 35, in the high empire, being almost doubled in number. Then we see the establishment, for periods of time, of multiple emperors in the Roman Empire in an attempt to try and coordinate political control. Side-by-side with that, we see a major process whereby Rome ceases to be the single focus of political power in the Empire. We see the establishment of Constantinople by the Emperor Constantine in AD 336.

3:03Skip to 3 minutes and 3 seconds Which creates a rival centre of the imperial patronage and power right over in the East, close to the Eastern Frontiers, which were becoming subject to increasing pressure from forces outside. So that was one major change. Another major change which had very, very far reaching consequences for the rest of Antiquity, and indeed for the medieval period, was the formal recognition first of all by the Emperor Constantine of Christianity as an official religion in the Roman Empire. It was tolerated in the early fourth century after years, centuries of having been underground religion, and then by the end of the fourth century is recognised as the single religion of the Roman Empire and paganism was outlawed.

3:53Skip to 3 minutes and 53 seconds And so that major change had fundamental implications for not just religious practice but also the nature of society and even down to patterns of authority in towns across the empire. Side by side with those two big changes, we have a resurgence of economic activity and commercial activity. A continuation, in a sense, of the situation that we’d seen in earlier periods, but I think taken together all of these fundamental changes very much altered the nature of the Roman Empire. And in a sense, prepares us for understanding, anticipating the nature of early medieval Europe with regionalisation of control and splitting between West and East and so on.

Portus and the Roman World in the Third and Fourth Centuries

This week we are in crisis! I talked first of all about the challenges to Roman authority from within and outside the Empire during the 3rd century AD, together with a crisis in the Roman Imperial monetary system.

I then went on to explain how during the later 3rd and 4th centuries AD emperors like Aurelian, Diocletian and Constantine responded by regionalizing the ways in which the Empire was administered, financed and defended. Other significant events were the foundation of Constantinople, and the official recognition of Christianity in AD 312. 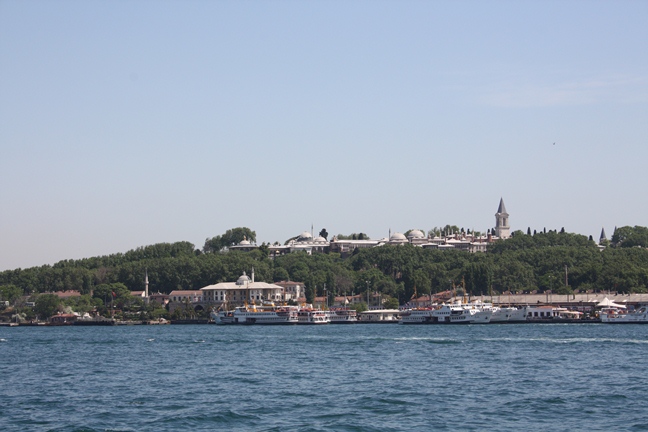 View over the Golden Horn at Istanbul towards the Topkapi Palace, which was sited on what was originally the heart of Constantinople - Simon Keay © University of Southampton

Inevitably all of these changes left their mark upon Rome, which was walled in the later 3rd c. AD and saw the appearance of the first Christian churches like St. John Lateran and St. Peter’s, but which also saw a lessening of Imperial patronage following the establishment of Constantinople (Istanbul) in AD 330, and the rise of Milan and then Ravenna as Imperial residences in the course of the 4th and early 5th c. AD.

What was happening at Portus?

Notwithstanding all of this, Portus remained very active as the maritime port of Imperial Rome. It is known, for example, that some time between AD 334 and 341, the community living at the port was granted the status of a town and was referred to on one inscription as the Popuius Flaviae Constantinianae Portuenses. By incorporating the names of the Emperor Constantine in the name of the port this inscription is linking him to granting it the privilege of being constituted as a town. Still, in this period of Roman history it is unclear what being formally constituted as a “town” really signified. It could simply be a symbol of status, or that it managed its affairs separately from Ostia. During the 4th century Ostia saw a period of economic recovery, evident in new constructions such as the Christian basilica.

However, although the title suggests there was an urban community of some kind at Portus by the 330s AD the geophysical survey of the site hasn’t revealed evidence for an urban settlement of any kind, suggesting that it must have been quite small. Our guess is that it lay in the southern part of the port around the later Basilica and the Episcopio and may have included the settlement on the north side of the Isola Sacra as well.

Our excavations, and those of other colleagues working at the site, have not revealed evidence for any break in the use of port buildings or let-up in the intensity of imported ceramics from across the Mediterranean. This kind of evidence complements indications from the ancient sources. The great Theodosian Law Code, for example, makes constant reference to Portus, both in terms of regulations about charges due on arriving ships carrying state cargoes, and also in an attempt to prevent private speculators from using state owned warehouses, like the great Grandi Magazzini di Traiano. Nor did the port remain isolated from the religious change at work at Rome and in the Empire at large. The first known bishop of Portus, Gregorius, is recorded in AD 314, while the wealthy senator Pammachius is known to have built a large guest-house for pilgrims (xenodochium) somewhere in the port in AD 398.

In the next activity Dragana, Kris and their students will show how we excavate the site in order to come to a better understanding of these transformations.