0:04Skip to 0 minutes and 4 secondsDRAGANA MLADENOVIC: So it is a very, very long sequence that we are currently trying to understand. In order to do that, we have chosen this particular area of the site to excavate. It lies at the intersection of two of the large harbours, it contains all of the phases. It is most probably a service wing of the Palazzo, so we definitely did not choose it based on the attractiveness of the finds. So what we have done here first, is we have done some geophysics. These are the ground sensing methods that are not destructive, and they give us a rough outline of structures that lie beneath. And then we proceed with an excavation.

0:50Skip to 0 minutes and 50 secondsThe way we are excavating is through the stratigraphic method. So we are exposing layers in a vertical sequence, and removing them one by one. That way, the youngest deposits, those are the most recent, are excavated first, and we are going further down towards older contexts. Now this is ultimately a destructive process. As we expose evidence and we excavate it, we effectively destroy it. This is why we are so meticulous in the way that we record and document everything that we do. And we do this in quite a number of different ways. We keep a written record of everything that is done for example, through context sheets that we do.

1:33Skip to 1 minute and 33 secondsWe keep a drawn record through drawings of plans and sections and features. We also do a photographic record, where we photograph entire contexts, or features within those that comprise a number of contexts, or entire rooms. And we also keep a digital record, both of everything that we do-- as you can see here --and of for example, laser scanning of various features that we uncover. We also fully process all of the finds. We take soil samples in order to get environmental data. And all of this data is then held both in physical and in digital form. So should anybody ever want to work with our material, or to check our interpretations, everything that we have done is well preserved and documented.

As Dragana said at the beginning of the video, the sequence of development, use, abandonment and destruction at Portus is long and complicated. The site is also very large, being the size of an average Roman town. So when we started working here we faced a challenge - how do we investigate it, how do we learn about its development and phases?

In the past such sites were studied through large scale clearance excavations, where large chunks of towns were unearthed. Think of Ostia or Pompeii for example. One could get a general idea of the site by such means, but much was sacrificed in the process. In order to cover vast spaces in a short period of time stratigraphy was mostly ignored, the majority of finds were discarded while those that were kept had very little information about the circumstances of their discovery, and documentation was kept to a minimum. Furthermore, no plans were made how to preserve the remains once out of the soil that has protected them for thousands of years, and these days we are witnesses of conservation problems that sites investigated in such irresponsible ways face.

With large scale excavation out of the question we proceeded to carefully develop our research design. As you’ve seen already we first did geophysics to get a general idea of the extent and nature of the site, but there are limitations to what such methods can tell us. In order to obtain good dating, understand the sequence of phases and test our interpretation of geophysics data we had to excavate. The challenge then was to define an area that would be relatively small and manageable, but that would provide us with information about all phases of the site and their interrelationship. You can think of it as a key-hole surgery excavation, if you wish.

Can you see why we chose the Palazzo Imperiale? Take a look at the plan below, and the relationship of the area we are excavating (number 7) to the harbour basins. It is clear that this must have featured throughout the life of the site, and its central position makes it of strategic significance, whether for managing the movement of goods, or perhaps for overseeing activities in the basins. You might have seen some of the geophysical data from this part of the site last week. 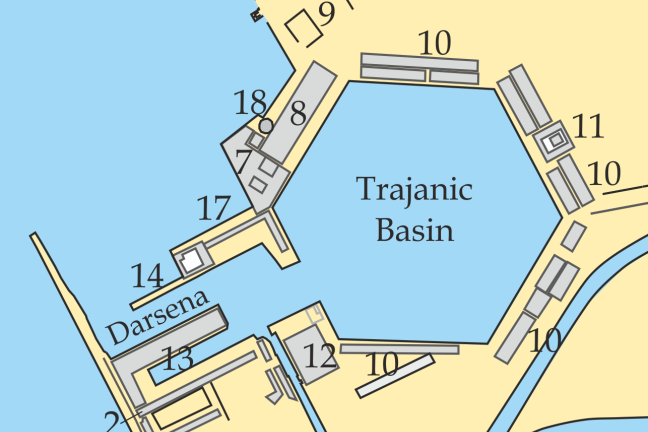 Plan of the central portion of the site, in phase four - Maria del Carmen Moreno Escobar © University of Southampton

And the area certainly did fulfil our expectations, but I’ll tell you more about that later on. Though I’m talking about it being a service wing this doesn’t mean we don’t have exciting finds. It was not named Palazzo Imperiale for nothing!

You will have heard the word stratigraphy again. Funny, Simon and I make the same gestures when we are describing successive layers of material! Also you are hopefully getting familiar with the term context. In archaeological fieldwork this basically equates to a physical trace of a moment in time: a distinctive deposit or structure, or part of structure, created due to a single event. This event can be short, like digging of a ditch which could have been undertaken in a matter of hours, or very long, like gradual filling of that ditch which could have taken decades.

I also used the term feature. It is not easy to define what qualifies as a feature, it depends on what kind of material you are working with. It might help you to think in terms of elements of stratigraphy that are not layers or buildings, but are also not portable like finds (e.g. a kiln, or an olive oil press would qualify). Stratigraphy, its rules and elements are important, but often confusing, so we will cover it in more detail in the next video.

Every excavation needs to be properly documented or it is a complete waste of time and evidence, and I mentioned quite a number of procedures that we follow to ensure we get maximum amount of information out of the archaeological material, while at the same time documenting it all properly. 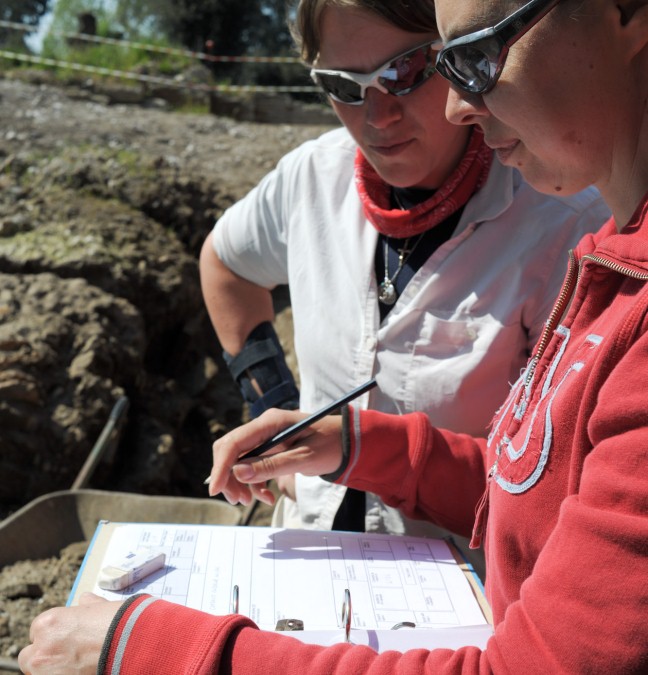 One of the most common documentation methods is photography. You learned last week about the photographic methods we employ from the air. This week you will see some examples via timelapse videos of excavation process, and the fact that this commonly includes stopping to make the excavated surfaces clean in order that they can be photographed. 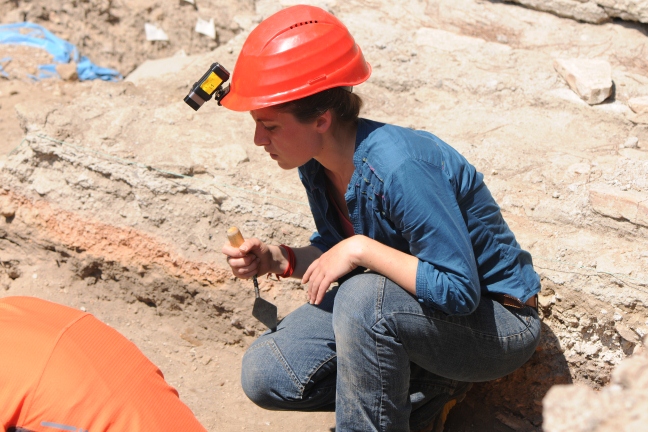 Archaeologists take a great deal of pride in cleaning prior to photography but this is not vanity. By removing piles of soil it becomes possible to differentiate contexts more easily in the photograph. We also include scales and north arrows to help relate the photographs to the survey we produced. In recent years we have begun to use more technical approaches such as attaching global positioning systems to cameras, using robotic cameras to generate enormous ‘gigapixel’ images, and also to generate panoramic views for use in building survey. 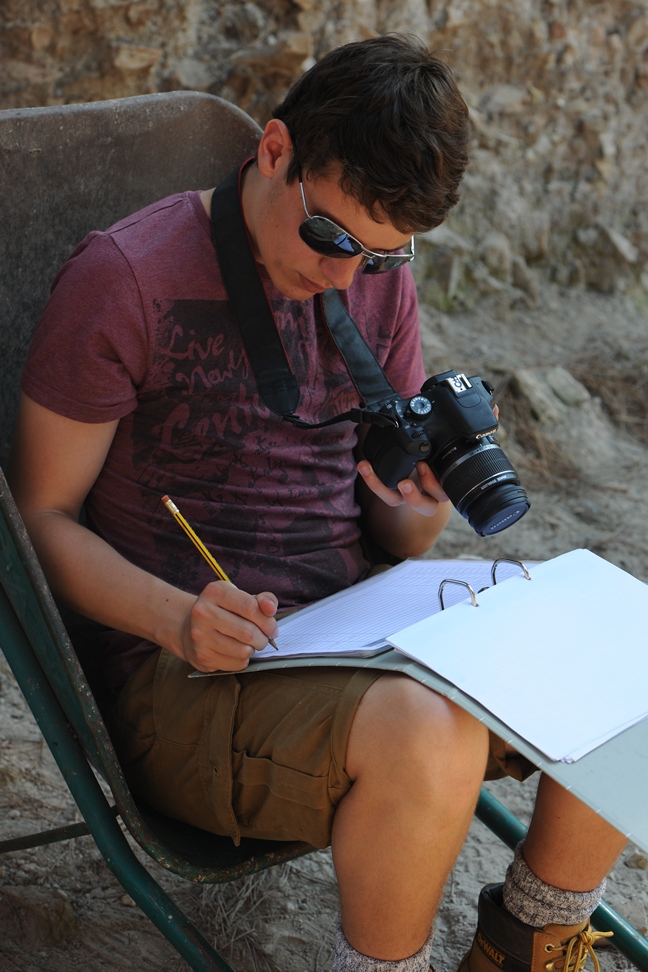 Some of the methods you are already familiar with. You learned about what we do with soil samples in week two where we talked about scientific methods like palaeobotany, and also in week three where Ferreol described his coring work. On an excavation soil samples fulfil the same role as cores – they provide samples of data tied to very specific parts stratigraphic sequences. Other methods are new to you but we will come back to them later: e.g. you will learn more about laser scanning later this week and see some examples.

Example documentation from the field

Records are still kept on paper in the field despite trials of many digital solutions. Currently, we still find the paper record is still easier to use in what is a dusty and dirty environment, although projects such as the University of Cincinnati’s Porta Stabia project at Pompeii have had impressive results using touch-screen tablets and other devices. What you see below are some in the field records – a context sheet, sketch plan, section and a register of soil samples. These are then digitised to form digital maps and entries in our on-line database. 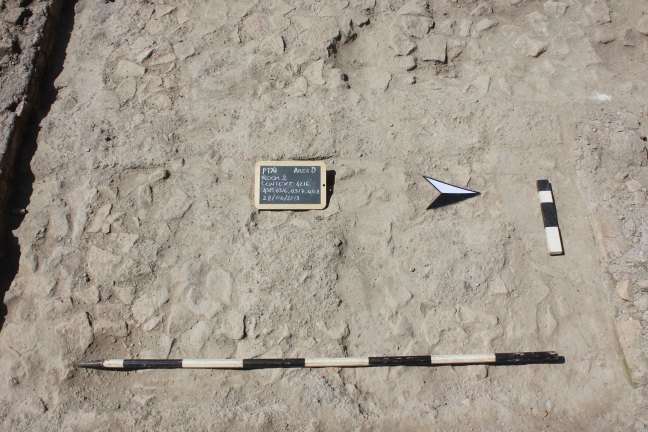 Record photograph - note the inclusion of a scale and north arrow, and a board describing the context. We have experimented with various digital alternatives such as tablets but the blackboard remains the most efficient method - Hembo Pagi © University of Southampton 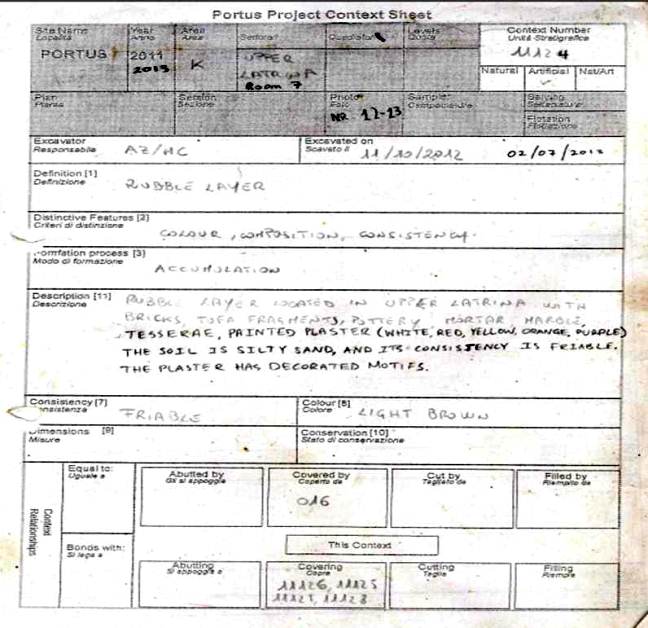 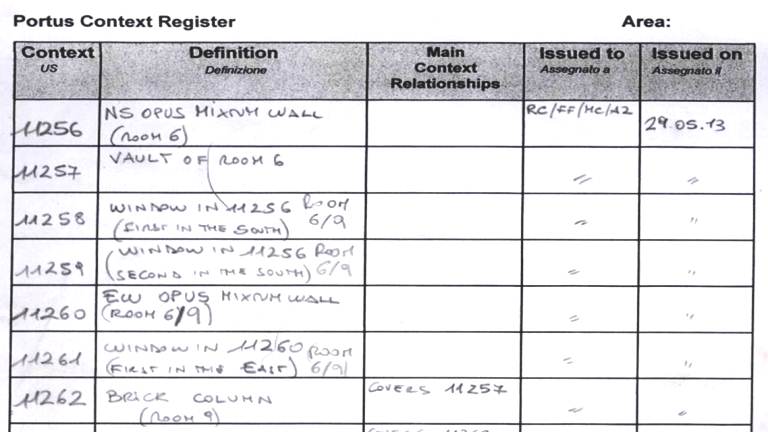 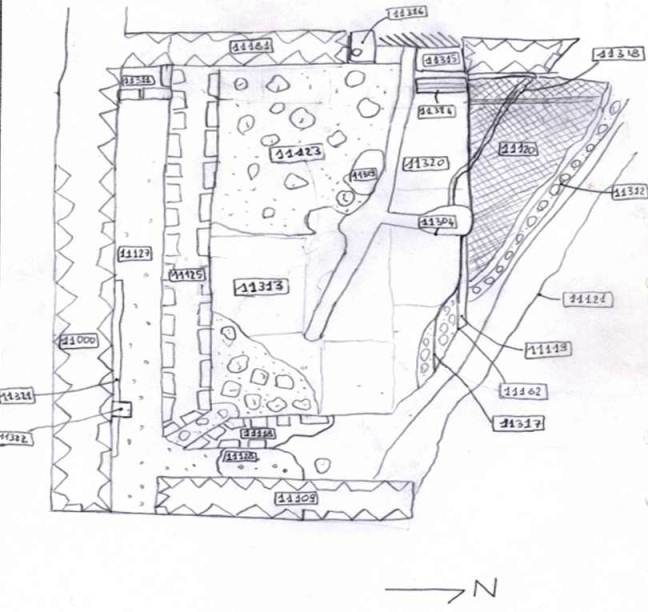 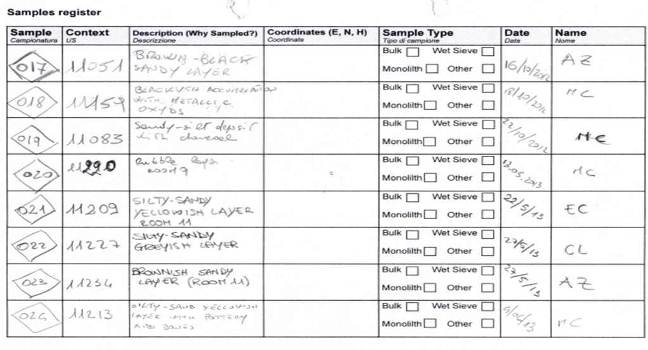