0:06Skip to 0 minutes and 6 secondsGRAEME EARL: Sometimes you just want a time machine. You want to get a real sense of what the past looked and sounded and even felt like, to get a sense of the place as much as a record of the space. Computer graphics techniques have been used by archaeologists for decades to provide this sense of travelling back in time and looking at buildings before they collapsed. There's been a great deal of debate around issues like whether we should show different alternatives or whether we should write down our thinking about every new bit we add, everything that we build on, on top of the often scarce fragments available to us through excavation, even at a site as rich as Portus.

0:46Skip to 0 minutes and 46 secondsAnd also the time machine metaphor doesn't really make any sense. We can't go back to some objective past because we all make it through our experiences. My interest has always been in using these computer models as a way of thinking, a place to think inside. Making models, like drawing with a pencil, involves you thinking. You have to make choices about what evidence you trust and what surviving information from elsewhere to bring in. If there's a well-preserved bath complex in North Africa, that's the same size as the remains we have of the Terme Della Lanterna, can't we just stick that in its place next to, maybe, a miniaturised lighthouse copied from the mosaic at Ostia Antica.

1:27Skip to 1 minute and 27 secondsI think the answer really is yes and no. It's great to use the computer to produce visuals assembled from a range of sources. This is a great interpretive method. But it's also important to make it clear how robust we think the models are. Often, just writing about this process is fine. But at Portus, we've also experimented with some other methods. Let's think about Building 5 again. We start off with the geophysical remains. The three-dimensional GPR results, coupled with the magnetometry and ERT gave a good impression of this massive building. Look back to Week 3 to check out ERT and GPR, if you're not sure. But we still need to excavate, in order to make sense of the structural sequence.

2:14Skip to 2 minutes and 14 secondsWe need to excavate to know what blobs in the geophysics link to which other ones. What happened first? And when? So we do the excavation. And we excavate at one end of the building and then discover something, perhaps a collapsed pylon which we then go and laser scan to record. This pylon turns out to be one of the huge supports that held up the roof. So we then use airborne photogrammetry and conventional surveying to make a detailed 3D record of this pylon and everything else that survives. Again, you learned about these methods earlier this week. Stage 2 is interpreting these building survey results. What do the fragments of brick and tile tell us about the type of building?

3:01Skip to 3 minutes and 1 secondAnd given the apparent size, what kinds of building could be made of these components? At this stage, architectural history, the kinds of things that Christina helps us with, goes a really long way. We know about these kinds of buildings that survive elsewhere on-site and at Rome and Ostia. But this one seems slightly different. And in any case, intellectually, we want to work out whether bringing architectural historians into the process helps us to understand the hypotheses that we're generating. So Stage 3 is using the kinds of software that civil engineers use to make sure a new building isn't going to fall down. To simulate in this case, whether an old building wouldn't have fallen down. Matt, another Ph.D.

3:44Skip to 3 minutes and 44 secondsstudent here at Southampton then uses the structural parameters, alongside a host of other factors, to give the computer an idea of what the range of possibilities is. And then we let the computer run amok. It produces dozens or even hundreds of versions, called procedural models. It's not so much using the computer to replace human expertise but rather to make all that expertise a bit more explicit and a bit more visual. And so finally, onto Stage 5. We all evaluate the range of models that have been produced. And we decide on those that seem to be the most likely. And then we produce much more detailed graphical representations of the building.

4:28Skip to 4 minutes and 28 secondsIt's these that give a sense of the building in context, providing yet another way to think about the archaeology. And then we think, oops, we'd better do some more geophysics or some more excavation or analyse some more finds to refine our thinking. And that's how it works. Now, let's think again about how the building we've reconstructed might have been used.

The Portus Project has explored the creation of many alternative methods for visually representing interpretations of the site and for delivering these online, in exhibitions, publications and on site.

The modelling of Building 5 should therefore be seen in the light of this mixture of artistic practice and analytical simulation of buildings and objects. For example, Rose Ferraby produced a series of screen prints reflecting archaeological processes such as geophysics and aerial photography in use at Portus.

We have also examined the history of representation of the site, including those by Pirro Ligorio, Antonio Danti and Italo Gismondi, effectively extending the ‘multimedia’ representation of Portus back at least to the 16th century. If you have time you might want to read a short paper about this work below.

For the reconstruction of individual buildings at Portus, we have examined the corpus of contemporary Roman architecture to understand better the range of possible materials, forms, and construction practices. This is further supported by studying Roman representations of architecture portrayed in relief sculptures, mosaics and on coins. These include the depictions of Portus on the sestertius issued by Nero in AD 64 and the Trajanic sestertius showing the hexagonal basin, both of which we will discover further in the ‘Find of the Week’ section.

Where holes in our interpretation remain, we turn to examples of buildings of similar ground plan and function from later historical periods to find further possibilities. Once we have gathered the possible details, and their variables, of the building’s form and composition, we create our models. Without the 3D software, this process is particularly slow and limited in perspective. We are constrained to drawing certain views of the structure and, often, without the added visual details (wall facing, entablatures, roof tiles, etc) which really affect the presentation of the building itself. Once our model is completed, we test its structural stability to see if our interpretations stand up to reality. If they don’t, we go back to the drawing board and begin again.

Once we are happy with the structural data we consider other factors, such as surviving examples from elsewhere in the Roman World. The 3D modelling process enables us to reconstruct a building with minute detail and allows us to see the building from various angles. An added bonus is the ability of easily changing the unit of measure from our modern metric system (in which the surviving remains on site are measured) to the Roman foot (which equals 0.296 m) to check for Roman design units. Recent advances allow the procedural modelling described in the video, exemplified by Matthew Harrison’s work. 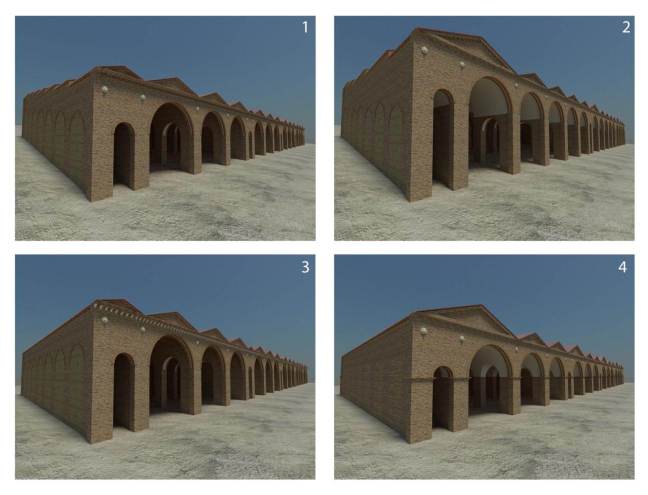 Best of all, we can place the building within the greater model of the site to see how the buildings interact with one another, giving us a better understanding of a Roman person’s experience of Portus. Still, we have to be careful of making these kinds of statements. 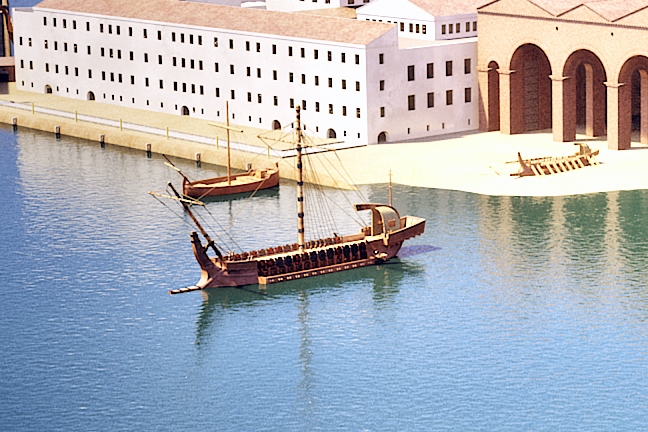 In addition to thinking about the styles of computer graphic rendering we produce, we also have to think about where we put the virtual camera. For example, from whose perspective is the previous view constructed? What kinds of views of Building Five would you be most interested in us developing?