Nails and other metal artefacts from Building Five

Metalwork is a common feature of all Roman sites but the quantity, preservation and the types of artefact present vary enormously both between sites and trenches. Across Portus the most common type of metal find is the iron nail. This is not unusual for Roman excavations, and the iron nails come in all sizes reflecting how commonly they were used in the community.

Iron nails are used for fastening together architectural elements such as floors, ceilings, doors etc. In addition we find smaller, more decorative nails of both iron and copper alloy being used for household items such as locks, furniture etc.

The range of metalwork differs depending on the context within which it is found. In a domestic environment, one might expect for example to find broken or lost jewellery showing the presence of women. In the excavation of a port site we could expect to find a number of items reflecting its proximity to the sea and associated transport links, such as cart and haulage fixings, fish hooks and large shipbuilding nails.

At Portus, we have very few finds relating to domestic life generally, and this is demonstrated in the metalwork also. Interestingly, we initially also found very little evidence for the site having any connection to the sea. We have at the time of writing, only found two copper alloy fish hooks, both broken, together with a few bent iron nails which could be homemade fish hooks, most of which were found just to the north of Building 5.

In Building 5’s trenches we have, however, begun to find evidence for ship building or repair. This comes in the form of sheathing tacks. These are small nails with large flat heads (see me holding one on the BBC website) that were used to hold thin sheets of lead onto the sides of ships’ hulls. The lead is thought to have had two possible uses: to prevent the wood of the hull from being eaten by ‘shipworms’ or marine bivalves such as Teredo navalis, or there is a theory that it was used to seal joints and seams in the planking.

Sheathing tacks are found throughout the ancient Mediterranean and the Roman empire, with the most notable example on the ships constructed by Caligula and found sunken in Lake Nemi, just outside Rome. The tacks are found hammered in to the lead in a ‘quincunx’ pattern (as shown on the side of a dice with 5 dots).

The sheathing tacks are formed either by pouring molten metal into a mould or by hammering the end of a bar of raw metal into a mould to form the head, depending on where the tacks were manufactured. We have found small bars of copper alloy in association with the sheathing tacks and pieces of lead in Building 5, and most of these show cut marks suggesting that they are the raw material from which the tacks are made.

On the underside of some heads we often find a pattern of protruding dots or hemispheres and bars, which appear decorative but were not designed to be seen when the tack is in use. It seems most likely that these protrusions are used to grip the soft lead when they are hammered in.

The variety of patterns on the undersides of the heads of sheathing tacks is shown in the illustration below of those found at the Roman port site of Myos Hormos at Quseir al-Qadim, Egypt where we worked for many years, including revealing a quayside made from amphorae. These include varying numbers of hemispheres (4 to10) and bars (3 to 4) in circles or squares. At Portus, we have considerably fewer tacks at the moment but the patterns are very similar – (below) so we can assume that the function is the same. As we continue to dig we hope to find more.

The sheathing tacks at Portus are not widely distributed. Almost half of the tacks identified at the time of writing come from a single context in the Building 5 [4336]. This context is a thin burnt layer containing a large number of metal objects, and it is sealed by a floor dating to the period 3 enclosing of the building (later 2nd century) and the suspensurae for a granary floor in period 4. This is consistent for the date range of the use of sheathing tacks which are believed to go out of use towards the end of the 2nd century when they are no longer found on wrecks (Parker 1992: 199).

Sheathing tacks are usually made of copper alloy. We are using this term until we have had some of them tested for their metal content. This is usually carried out using an XRF (X-Ray fluorescence) Spectrometer. The most common copper alloy is bronze, a copper-tin mix, but the alloys can include a number of other metals including zinc (brass), and less commonly, arsenic and antimony. The sheathing tacks of the Nemi barges are almost pure copper, but as these are royal barges we have to be wary of assuming that other boats are built the same.

As mentioned above, many metal items were found in the same layer as the sheathing tacks suggesting they were in use at the same time. These include the small bars of copper alloy for making the tacks, used iron nails of various sizes, a rove (which acts like a washer for a nail which is bent over for fixing) and, curiously, a number of tiny copper alloy tacks (see site drawing). They are fragile but their context seems to indicate that they may also have been used on the ships. A couple have been found in other contexts still in position in decorative copper alloy edging strips, so perhaps these too were used in this fashion. There are also a number of larger fragments of copper alloy sheets found (without decoration). We may cautiously therefore assume that some of the fittings of the ships being built or repaired at Portus had decorative edgings to them.

The later use of Building 5 for burials is also represented in the metal work. Although the burials have no grave goods with them generally (suggesting Christian burials), a small pin was found near the skull of one of the burials [4185]. A pin in this context may be from a shroud or winding sheet used for the body when it was placed in the grave.

From the types of metal object and their distribution within Building 5, it does appear that its original use was for ship building or repair as trenches in this area contain nearly all the evidence for port activities. In its later use as a granary, we would not expect to find any metal objects as a warehouse use means that people rarely stay in a room for any length of time – so there is little opportunity to drop or break the possessions that later form our archaeological objects. Even when the building is later abandoned, the building does not appear to have been used by the homeless – the only people who move in are looking for a quiet place to bury their dead. 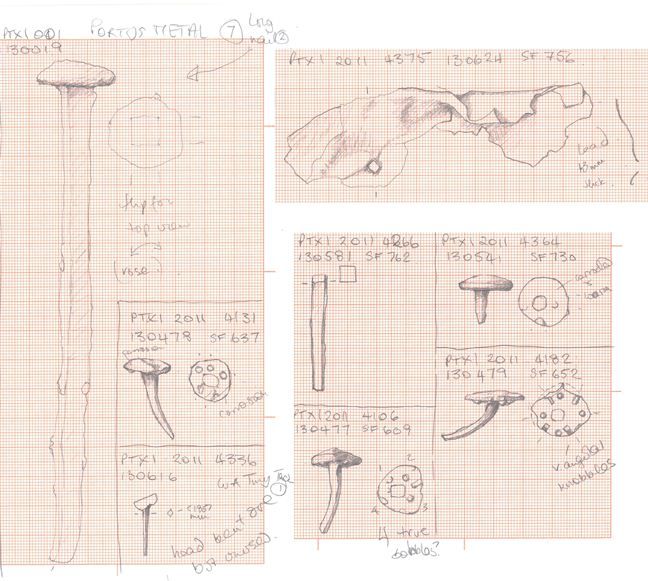 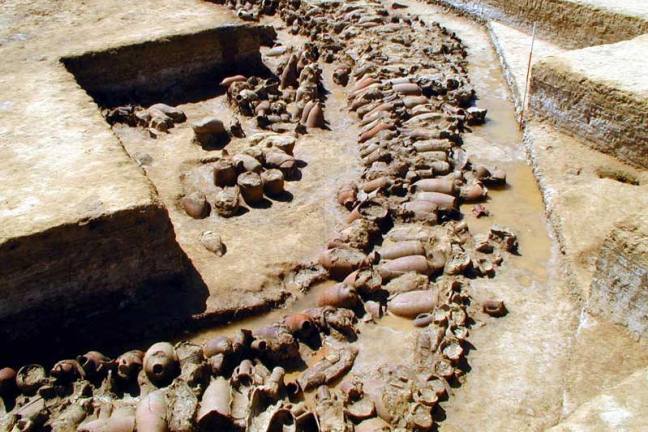