0:05Skip to 0 minutes and 5 seconds SIMON KEAY: Now I’d like to introduce you a little bit to another very important time in the development of the Mediterranean world, which is the late fifth, sixth, and seventh centuries. Now this really is a time of transition. We’re in the late fifth century, we’re at the very, very final years of the Roman Empire. And the whole of the preceding period has essentially been one in which Rome has ceased to be the focus of the Mediterranean world. The primacy that Rome had enjoyed had been ceded, in part, to Constantinople in the east and, in part, to Ravenna in the north.

0:50Skip to 0 minutes and 50 seconds So Rome had become a kind of political backwater even though it was important in religious terms– the pope and his authority– and the seat of established senatorial families who were, of course, of importance. So it’s a world in which Rome is de-centered. At the same time, it’s also a world in which there is a political control, at least in the west, is disintegrating. And we see the wars of succession amongst rival emperors, which is gradually eating away at the cohesion of the political structure of the western Roman empire. And what happens in the west, in the end, is, in the course of the fifth century, we see Germanic peoples coming into the empire.

1:48Skip to 1 minute and 48 seconds We see those peoples, like the Visigoths, the Ostrogoths, and the Vandals moving into the old Rome provinces of Gaul, Hispania, Spain, Portugal, Africa, and establishing kingdoms that, in a sense, recognise the emperor in the eastern Mediterranean, but rule themselves, essentially. They spell the end of the Roman political structure. And indeed, Italy itself became, by the end of the fifth century AD, AD 476, Italy had ceased to exist with a Roman emperor. And we see, a few years later, the emergence of the Ostrogothic kingdom of Italy with King Theoderic.

2:43Skip to 2 minutes and 43 seconds So while we see the disintegration of Roman power in the west, the eastern Roman empire, by contrast, continues to exist with the emperor based at Constantinople who played a very clever game in playing off different Germanic peoples against one another, particularly in the west, and ensuring that the east stayed free, to a large measure. In addition to that, we see the eastern Roman empire continuing to be a cultural dynamo in the Mediterranean basin, as a whole. Side by side with that, we see the sixth century as a time of considerable religious divisions across the Mediterranean basin. All the Germanic peoples, the Germanic kingdoms, such as had established themselves in the western Mediterranean, were all Arians.

3:37Skip to 3 minutes and 37 seconds In other words, they followed a particular variety, a particular dogma of Christianity, which revolved around the divine nature of Christ. Whereas the eastern Roman empire, they followed a more orthodox brand of Christianity. And there were very substantial conflicts between these power sources. So we also see wars in the eastern Mediterranean, particularly between the Byzantines and the Persians further east. There’s very little doubt that one of the great events of the sixth century was the re-conquest of chunks of the western Mediterranean by the Emperor Justinian for a number of reasons. And this involved taking back Africa, which involved taking back large chunks of Italy and involved taking back parts of southern Spain into Byzantine control for differing periods of time.

4:44Skip to 4 minutes and 44 seconds And certainly, in the case of Italy, remains– large parts of Italy remained under Byzantine control until the early eighth century.

The Roman World in the later fifth to seventh centuries

The picture behind Simon shows the road leading to the entrance gate at Portus, and to the left the Casale – the hub of all our finds processing. Here Penny Copeland and her team record and analyse the great variety of objects we have from the later fifth to seventh centuries, and indeed all the other periods that you have already studied.

Last week Simon talked about crisis in the Roman empire in the 3rd c. AD, and the major changes in the subsequent transformation in the 4th c. AD. This week takes the story one stage further. It shows how Rome eventually became a political backwater in a western Mediterranean that gradually slipped from Roman to Germanic control until the final dissolution of the western Empire in AD 476.

While much of the eastern Roman Empire was to remain under the control of Constantinople, the political space of the western Empire had been filled by the Kingdoms of the Ostrogoths (Italy), Franks (France), Visigoths (Spain and southern France), Vandals (Spain) and Suevi (Spain). 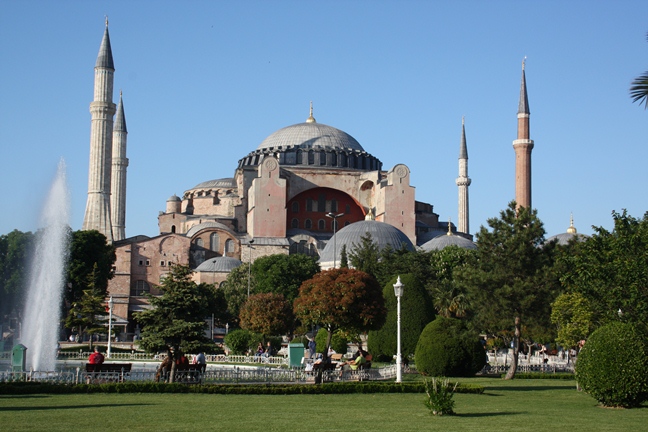 The Church of Hagia Sophia (Holy Wisdom) in Istanbul (Constantinople), which was converted into a mosque following the conquest of the city by the Turks in 1453 - Simon Keay © University of Southampton

The first Ostrogothic King of Italy was Theoderic the Great. He reigned from AD 489-525, basing his system of administration upon that which he had inherited from the Roman Empire. Upon Theoderic’s death, his successors were soon involved in a protracted war with the Byzantines to retain control of Italy; the eastern Roman (Byzantine) Emperor Justinian was keen to wrest Italy, Africa and Hispania back into “Roman” control. By the mid 6th c. AD they had lost out and much of Italy, including the area around Rome, remained under Byzantine control until at least the later the 7th c. AD.

Even though Rome had long ceded political primacy in Italy to Ravenna in the north, it retained great symbolic kudos by virtue of its long Imperial history and had for this reason been sacked by Alaric the Visigoth in AD 409 and Gaiseric the Vandal in AD 455. It was also important as the seat of the Pope and the Catholic Church.

Although the population of Rome would have been lower than it had been under the hey-day of Empire, Portus would have still had a role to play in supplying it. We know this from comments by contemporaries such as Sidonius Apollinaris the Urban Prefect at Rome in the middle of the 5th c. AD. Ostia, in contrast, was now in decline seeing an extensive reduction in population. Portus continued to play a significant role in supplying Rome in the 6th c. AD because it was a strategic prize fought over by Byzantines and Ostrogoths in the Gothic Wars (AD 535-553). After this, however, it is likely that the scope of its commercial role began to dwindle.

This week we have chosen the Emperor Theoderic the Great as the named ruler from the period covered this week. In previous weeks we have had Claudius, born in Gaul (France) into the Roman aristocracy, and then Trajan, born in Hispania Baetica (Southern Spain) into the provincial elite. Septimius Severus was born into a wealthy, provincial family in Tripolitania (Libya), and last week was the turn of Constantine the Great, born in Moesia (Serbia) into a powerful military family. Theoderic the Great by comparison was born into an Ostrogothic royal family. Clearly the times were changing.

Is this a period in Roman history that you know as much about? If not why do you think other periods gain more focus? What most interests you about the time often known as “late antiquity” that began last week in the late 3rd/ early 4th century and dominates this week of the course?