0:05Skip to 0 minutes and 5 seconds PENNY COPELAND: Hi. I’m Penny Copeland. I’m the finds manager at Portus. And I’m here with Rebecca and Luke. And we’re just going to have a look in the box and see what’s been found today. So, we have for example, this that was found by Luke. Are you going to tell us what it is?

0:22Skip to 0 minutes and 22 seconds LUKE MILNER: Yes. It’s a small glass tessera probably from a mosaic or something. But we found it in the rubble there, not in situ. So we need to keep digging and take out the rest of the layer before we can really find out much more about why it’s there and what it could have been a part of.

0:40Skip to 0 minutes and 40 seconds PENNY COPELAND: OK. So the mosaic has already been destroyed?

0:43Skip to 0 minutes and 43 seconds LUKE MILNER: Yeah, I mean I would’ve had to be because we’re in a rubble layer. Some people suggested that it might have fallen in from the storey above when it collapsed which would be why it’s on top of– so why it’s above our ground layer.

0:57Skip to 0 minutes and 57 seconds PENNY COPELAND: That’s good. OK. Let’s see what else we have. OK. So in here, we’ve got a selection of pottery items, I think, by the looks of them.

1:20Skip to 1 minute and 20 seconds REBECCA WOODS: Well, by the wear on it, it kind of looks a bit like domestic pottery. But that’s not really usual for around Portus because it wasn’t really a domestic site. So it’s quite an unusual and special find. Well, I think anyway.

1:35Skip to 1 minute and 35 seconds PENNY COPELAND: Yeah. And the black covering is indicative of cooking. OK. It’s been in a fire. But only one side has been in the fire. So it’s not from some kind of general fire. So that’s good. And we also have this. What do you think that is?

2:12Skip to 2 minutes and 12 seconds PENNY COPELAND: Yeah. It’s very corroded. Yeah. It’s also slightly concreted. So as it’s rusted, other items have been bonded into the oxide that’s effloresced from it. And this is quite common for the nails that come out at Portus. They come out in a fairly bad way.

Some finds from today

The “small finds” provide us with an invaluable insight into the nature of a given deposit, in addition to providing us with specific information about a particular object. They can be distinguished from the bulk materials such as building materials and ceramics.

Small finds tend to be the objects that provide us with personal insights into the people of Portus and often also the appearance and function of the impressive buildings within which they lived and worked. As we will see retrieving the find from the ground, bagging, labelling and perhaps surveying its three-dimensional position are only the first of many stages it goes through. 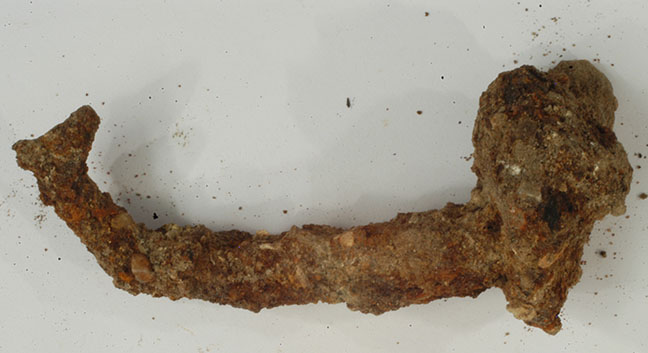